Friday night and a faintly foreboding security man in black suit and waifish hostess in midnight dress stand in the empty lobby of the Upper East Side outpost of the Gagosian Gallery. There are no customers and no sign and it is not an inviting space. The floor is concrete, the room flooded in interrogatory fluorescent light, like a clinic where well-heeled aesthetes might go for a late-night colonic.

To enter Kappo Masa, the restaurant below, a prospective diner must therefore possess no small amount of wherewithal (and a reservation). One must feel entitled to be there to be there. But the prices on the menu are second-mortgage level and the location is so tony that I’d wager all those who dine at this Larry Gagosian and Masayoshi Takayama collaboration, which opened earlier this month, are up to their lilac nipples and ruby aureoles in entitlement.

Down a flight of stairs, past three of Richard Prince’s monstrously large Instagram prints, a Brobdingnagian flower arrangement stands in a stone base like a floral tiki god beside which there is a small hostess stand with a small hostess attached. The L-shaped room, which skirts a large open kitchen, is welcomingly cavernous and clad in oya stone, an igneous rock from the Tochigi Prefecture. Slightly less craggy and lava-like are the clientele, who I assume, from the suppleness of their skin—as creamy as the yellow leather banquettes—impeccable style and joie de vivre overlap significantly with Go Go Gagosian’s main hustle as a gallerist. These are art folk.

Not of them, I install myself at the small zinc bar nestled next to the stairway. I join a silver-haired man who peers at his grilled toro suji with scallion roll over a pair of snazzy bifocals. He asks to use the house phone and is handed an iPhone. This is, to say the least, an impressive bit of restaurant tradecraft. The drinks menu arrives in a baby blue, lizard skin hardback folder. If it wasn’t a menu, it could be a clutch. The bartender, perfectly named Art, is an Armenian like Mr. Gagosian. He’s sweet, so sweet he says sweetly and sadly that he doesn’t have bitters. There will be no Manhattan for me, but Art does share a few thoughts about the Richard Princes hanging above him.

“Are they worth millions?” Art wonders incredulously. “Sometimes I think it’s like Grey Goose,” he says, nodding dismissively to a pair of silver bottles at the bar behind him. “People pay for the label—they don’t even care what’s in the bottle.” Art makes his own eau de vie and doesn’t fuck with labels.

As for those Prince prints of Instagrams, they capture the unremarkable selfies of future-nobody doyennes like @skyferreira and @asiaargento. More saliently, they chronicle the rewards reaped by these momentary celebrities, the thousands of “likes” that attach themselves to the images like ramoras on the shark of fame. That these prints will sell for millions, or hundreds of thousands at the least, and that their sale will benefit Mr. Gagosian, on whose walls they hang, and Mr. Prince himself and whoever buys them, makes the joke either inside or cruel, and probably both. Mr. Prince’s art is slippery and unpossessable, a funhouse mirror.

The art also tidily sums up my thoughts about Kappo Masa, a restaurant that stirs questions of how, what, who and how much we valuate the dining experience. It’s expensive, which should be no shock to those familiar with Masa’s other restaurants. Masa, at the Time Warner Center, is among the priciest in the world. But to me, Kappo Masa’s cuisine is inscrutable, as opaque as any art world transaction, and therefore invaluable, in both its contemporary and obsolete meanings.

It takes very little critical facility to enjoy chef Takayama’s cuisine on a superficial level. Pick something at random from the menu, so long it’s like a Greek diner’s but much more terse, and something sterling this way comes. The tuna tartare ($34) is a tiny mound of torn bluefin tossed with wasabi over a thin layer of scallion, atop a monolithic ceramic pediment of Mr. Takayama’s own design. “Tai” sea bream with white truffle and ponzu, mother of god. Of the extensive rolls, the kanpachi jalapeno roll ($34) and spicy tuna roll ($22) are, though not particularly adventurous, pleasing. The former, confusingly topped with a thin slice of serrano, not jalapeno, has a belly full of julienned fried potatoes and a silky slice of amberjack. Of the sushi, the bread-and-butter of Kappo Masa, it arrives extremely fresh and the flavor of the fish is the flavor of the sea and as spread out as the sea, too. The rice is so well balanced with the fish it feels weightless. Eating a piece of sashimi at Kappo Masa is the closest thing I know to eating stillness.

I understood, frankly, very little of what I ate. Analysis slithered away and words dispersed like a shoal of fish. Some of what I understood I liked. An uni custard, which is an off-menu special, is a single thought perfectly executed. Served on the shell from whence the meat comes, the custard itself is uni, slivers of un-custarded uni inside. Uni is naturally creamy and this preparation liberates its natural qualities, which seems to be the entire embodiment of a chef’s work. The spicy chicken wings ($18) are as slender as dancer’s fingers, still warm from the kill. Marinated in soy and sake, grilled to render the fat from the wings, they are minimalist with maximal flavor. Some other things that I understood I didn’t like. Duck and foie gras tacos ($26), for instance, were uncharacteristically clunky, like finger food from a fancy bar mitzvah. And Masa’s famous surimi pasta, where noodles are made of fish, dissolved weirdly in the mouth. The shrimp of the chili grape tomato and garlic shrimp pasta gained nothing in its extrusion.

But mostly I was delighted and painfully conscious of my own limitations. I knew something interesting was happening at the table and in the kitchen. It was the fruit of Mr. Takayama’s dedication and skill; that much was clear. But even eating it, my experience felt second-hand, for the valences of price and class and privilege had rendered the judgment of excellence a fait accompli. So extravagant and pat the praise, I couldn’t help but think of Richard Prince and his Instagram muses, trolling from the wall above me. Were they worth it? Did he make them worth it? Was I missing something?

To that last question, the answer is most definitely yes. And that answer is, perhaps, the most salutary effect of either Mr. Prince’s work or Mr. Takayama’s menu. They awaken one not just to @skyferreira’s pouty lips or uni, unagi and sabe, whose extraordinary valuations at 976 Madison force one to reconsider their inherent worth. It makes one reconsider how one values anything, looks at everything, and finally, perhaps, not just looks but sees with fresh eyes. And that deserves thousands of likes. 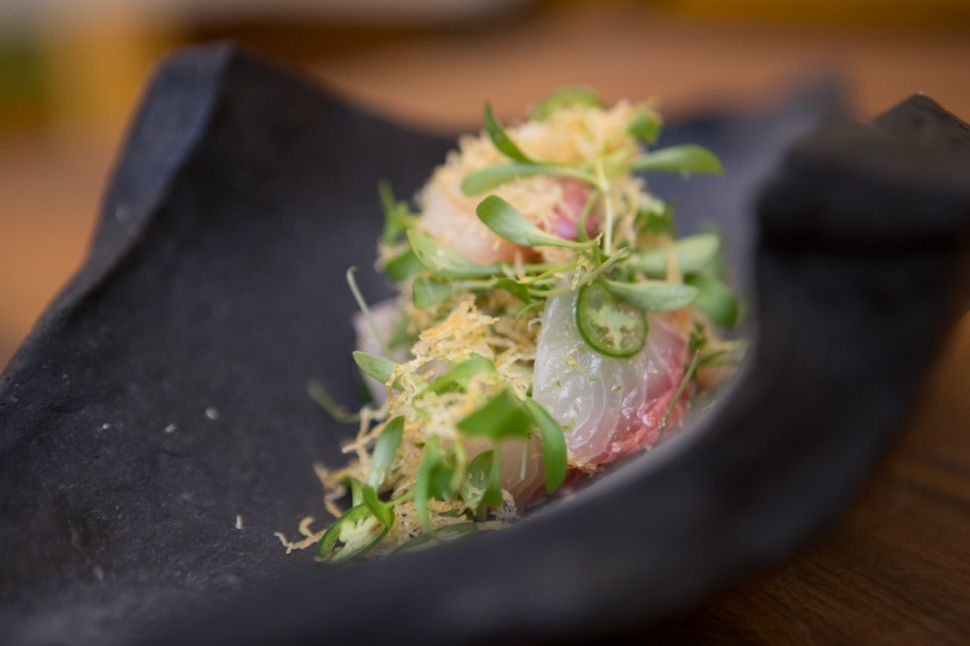