As any experienced Real Housewives watcher will tell you, no season is complete without a reunion episode or two, wherein all the mind-numbing arguments from the season are dredged up and hashed out again — just in case you were dying to hear even more about Gina’s opinions on Jackie’s psychic powers, and all the boring thoughts Andrea has about a host of boring topics. Let the fun begin!

Before I get to the actual housewives, we definitely need to talk about Alex Perry, who’s hosting the reunion, and who I’m assuming is Australia’s answer to Andy Cohen — a terrifying thought, I know. According to his Project Runway Australia bio, Alex Perry is “Australia’s most glamorous fashion designer,” whose “brand is synonymous with luxury, prestige and quality.” And also housewives, apparently?!

I have so many questions. Why does he always wear sunglasses on his head? Is it wrong that for a second, I thought this reunion was being hosted by Pitbull? Why is this reunion being hosted by someone who designs jeweled corsets? Also, have Alex Perry and Andy Cohen ever met — and if not, can that reunion please take place, with me present? K thx.

On to the housewives! Everyone’s a little nervous to start shooting the reunion, as their arguments have escalated in the press since the show started airing. Andrea tells her make-up artist she’s going to own up to and apologize for all the mean things she’s said over the course of the season, as if the make-up artist gives two shits. This will be a running theme of the reunion: Andrea, now having watched herself throughout the entire season, trying to convince viewers she’s not, in fact, a lame-o sack of total lameness.

Gina, meanwhile, doesn’t need a make-up artist because Gina is a boss.

After greeting the cast members, Australian Andy Cohen asks the women about how they’ve been dealing with drama in the press and on social media. Andrea, apparently, has been very proactive in the Twitter department. “I’m not a Twitter expert, but I have become expert at it,” she says. “I’m scared for the children who don’t have the confidence I have in dealing with these trolls… I’ve been communicating with the trolls and a lot of them have turned around when they know the facts.” Wow, such noble pursuits, Andrea!

Next, Andrea apologizes for calling Jackie a “cashed-up bogan” in the press. I don’t really care about Andrea’s sorry-not-sorry apologies, but I’m definitely filing “cashed-up bogan” away in my repertoire of unique and worldly ways to insult people.

To lighten the mood, fashion designer Alex Perry brings up what I presume is his fave topic: fashion! “When you work as hard as what most working mums do, it’s its just nice to go and buy a nice, tight dress and look sexy in front of your husband,” Andrea says regarding her attitude toward shopping. She’s doing a lot of “LIKE ME, DAMMIT” smiling. It’s unnerving.

Alex Perry asks the housewives a viewer-submitted question: What’s the most expensive fashion item each of them owns? While some of the women (ahem, Janet) own up to owning 5,500-dollar dresses, Andrea says she doesn’t like spending lots of money blah blah blah she has a $3,000 handbag but it’s only because she won it in a raffle blah blah blah zzzzzzzzzzzzzzz.

Then Alex brings up a great topic of conversation: Lydia’s obsession with sex. Gina may think Lydia’s constant talk about sex is vulgar, but I think it’s great. Lydia’s life is literally 30 percent sex, 30 percent planes, and 30 percent cheese. I want to be Lydia when I grow up.

Remember how Chyka and Bruce were the greatest couple in the history of Australia, or maybe even the world? They still are. Alex Perry directs the women’s attention to a screen, where BRUCE HAS RECORDED A FRIENDLY VIDEO MESSAGE FOR ALL THE WOMEN BECAUSE BRUCE IS THE BEST GUY EVER. In the video, Bruce says hello to all the women and congratulates them — and especially Chyka — on a fun and entertaining season. LOVE YOU BRUCE P.S. I’M NOT SINGLE BUT LET’S GO ON A PLATONIC ICE CREAM DATE SOMETIME.

Oh great, a segment devoted to Andrea. I briefly consider taking this moment to have some lunch, but decide against it when I realize I don’t have a nanny I can force to make it for me.

Speaking of nannies, Andrea explains that she has a rotation of five different nannies, because she’s a working mom with a husband and three kids. But wait — she wants everybody to stop tearing into her about the nanny thing, because her time management strategies can apply to anyone, even people who can’t afford nannies. All of a sudden she’s crying a lot and talking about how she went back to work when her baby was three days old, and how there used to be no money in her bank account, and it’s not fair when people say she doesn’t know anything about parenting.

When asked if she sympathizes with Andrea, Gina says she does, but she’s also mad at Andrea for launching a Twitter campaign against her — an accusation Andrea denies, because Andrea is super duper nice, you guys.

Next, it’s time for Alex Perry to show the women a montage of all the terrible things Gina has said about them all season. All the while, Andrea sits there shaking her head, chiming in every so often with “That’s a terrible thing to say, Gina.”

Because this is a Real Housewives reunion episode, the women each want to confront Gina about the things she’s said about them. Lydia asserts that she didn’t, in fact, marry her husband for his money. We have to take her side on this one — she obviously also married him for the cheese.

Jackie is really shocked by what Gina said about her, comparing her to a “bogan” (there it is again!) from the “western suburbs.” I don’t know much about Australian geography, so I’m just going to assume its like being from Jersey. Anyway, Jackie tells Gina that her comments were really offensive, and that her father was European and came to Australia with no money, and that she’s proud of her humble background.

Just when we thought we were going to make it through the episode without having to relive that godforsaken is-Jackie-really-a-psychic drama, the women bring it up again. Apparently, shortly after Gina and Jackie’s big fight, Gina was on the phone with producers and told them her sons were going to get a “bodybag” to deal with Jackie, or something. The details are pretty vague.

“Gina is one of the most vulgar people I’ve ever had the misfortune of speaking to,” Andrea chirps.

I didn’t think it was possible for Gina to outdo last week’s performance, but what she responds to Andrea is — brace yourselves — arguably one of the greatest lines in reality TV history:

Finally, Andrea brings up Gina’s mysterious legal email we’ve been hearing about all season. Apparently, Gina wanted everyone to stop talking about the possibility of her then-partner’s infidelity, so she emailed a bunch of the women saying her partner would sue anyone who kept discussing it, and cc’d Lydia and Andrea. Because she’s so organized, Andrea’s even printed out a copy! Gina didn’t think the email was so bad, but the other women felt ~threatened~.

Chyka, claaassic Switzerland, tries to mediate the argument, but it’s no use. Looks like we’ll need a second reunion episode next week! Buckle up, folks. 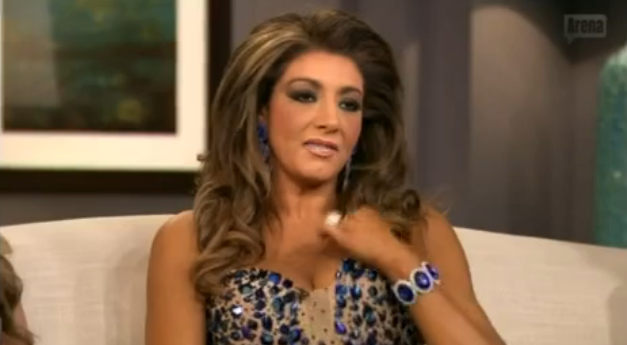