Well, folks, here we are again — another hour of the Real Housewives of Melbourne reunion, a.k.a. another hour of recalling all the scintillating ups and downs of the show’s first season.

To start, Alex “Australian Andy Cohen” Perry wants to talk about Jackie’s psychic powers, which I can officially confirm are COMPLETELY REAL, everyone. Jackie explains how her powers work; apparently, when she meets someone, she’s able to see their past, present, and future. In 11 years, she’s never had negative feedback from any of her paying customers. The people who give her trouble, she says, are people like Gina who bug her for a reading, but don’t like what they hear. Thankfully, nobody brings up Gina and Jackie’s psychic drama, and I can totally avoid sticking forks in my eyeballs.

And now for a very important segment all about Jackie’s fave phrase, “Shine, shine, shine.” Alex asks why Jackie needs to say “shine” three times. “I believe everything happens in threes,” she answers. Seems legit!

Speaking of Lydia, did you know she sometimes sucks at speaking English? The show certainly does, because they provide us with another fun collection of all the times Lydia’s said ridiculous, nonsensical things to the camera. My personal favorites include “If people want to spread rumors, they should spread their legs,” and “Looking forward is only an imagination of your brain. It’s what you want to imaginate.” In an uncomfortably sexual way, Alex Perry assures Lydia, “I’m glad you own it. It’s adorable. I think it’s gorgeous.” K ALEX.

Chyka’s heartthrob husband Bruce got to make an appearance last week (btw, Bruce, I’m still down to hang out), so this week, Jackie’s musician husband, Ben, shows up on set. Alex wants to talk about Jackie’s spending habits. “Jackie definitely loves to be spoiled, and I love spoiling her,” Ben says. Hey Ben, I want to buy $4,025-worth of lingerie, too. Help me out?

The last couple we need to talk about? Lydia and Figaro. No, Figaro isn’t her private-jet-flyin’, cheese-eatin’ husband, but rather her tiny Italian greyhound — you know, the one who hates red meat, loves chicken pie, and refuses to eat from anything that’s not fine China. Lydia confesses she cooks all of Figaro’s meals herself. It must be nice to have so much money you can afford to buy expensive groceries, and then give them to your dog, who’d probably be just as happy with a shitty old bowl of Eukanuba.

Alright, now it’s time for the ~dramatic~ stuff. First up, Alex Perry just NEEDS to know what Gina was doing for the eight million hours she spent in the bathroom at Andrea’s tennis party. Gina explains she spent 20 to 30 minutes getting changed, as if that’s a remotely normal amount of time to spend putting on a SINGLE DRESS. As Gina and Andrea bicker about the mess Gina left behind, Alex declares that Gina and Andrea are both “pretty pig-headed,” and that he thinks they could actually be “really good mates.” I hereby sentence Gina and Andrea to a slumber party filled with giggling, doing each other’s hair, and eating Vegemite straight out of the jar.

Next on the drama docket? All the times people called each other the C-word this season. While Gina’s always maintained she never called Lydia and Andrea c***s, the show airs a teensy tiny bit of evidence supporting the contrary:

Gina’s explanation? In saying what she did, she didn’t call Lydia a c*** — she only said she was going to call Lydia a c***. Love u, Gina. But apparently Andrea doesn’t. “Lydia and I broke away from that because we started to see what Gina is really like,” she says. “That level of vulgarity that she has, the low level that she hits, the things that she says about your family, your husband, your children — she’s not someone I want to associate with.”

Amazingly, Gina does it again with a fabulous response to Andrea’s complaining: “That suits me because you are absolutely a hideous human being.”

But wait, there’s more (of Gina calling people c***s)! The show airs some unseen footage from the bathroom, wherein Gina uses the C-word five more times. Gina points out that at least she didn’t call Lydia a c*** to her face. Gina won’t apologize to Lydia, because she doesn’t have to apologize for her opinions of her. Valid, I guess? IDK I just love Gina #teamgina.

Jackie’s especially surprised by the footage, because Gina chewed her out when she called Gina a c*** earlier in the season. Despite being, you know, a psychic, Jackie says she didn’t even know that footage existed, and is shocked by Gina’s actions. She feels physically sick, and storms off the set.

Can someone tell me why everyone’s so worked up about the use of the C-word, but they’re totally fine with casually throwing around the term “Chinese whispers,” and prancing about in Native American head-dresses at a Mexican-but-not-too-Mexican party? Australia sure is funny!

Just when I thought Gina had come up with the best possible comebacks to Andrea’s whining, she outdoes herself again. As Andrea continues to complain about Gina’s use of the C-word, Gina finally says, totally deadpan, “Would you like to eat my firstborn?”

Jackie finally comes back on set, and the anti-Gina accusations continue. She didn’t contribute at some charity event! She once Googled “failed psychics” in an attempt to defame Jackie! Chyka, the voice of reason, is totally mortified. She says she’s embarrassed to be on set, and wouldn’t mind walking off.

Next, Lydia presents Gina with a gift: a book about vaginas! “That shows that you have such a gorgeous sense of humor,” Alex tells Lydia, in that creepily sexual way again.

Miss Janet gets to close out the season, and she does a lovely job:

“Nobody knows what we have all been through together, and we are inextricably linked by this experience. And that can never be taken from us. We are the first Australian housewives ever, and we’ll always be.” 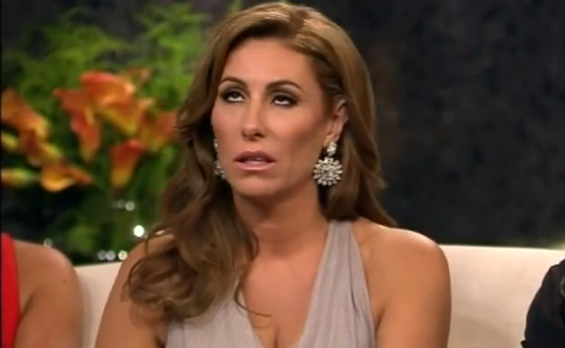