In a real estate career spanning more than half a century, Charles J. Urstadt has overseen the construction of the World Trade Center and served as the first chairman of the Battery Park City Authority. But Mr. Urstadt, who turns 86 this month, remains most famous for the 1971 law that bears his name—a controversial piece of legislation he passed as Gov. Nelson Rockefeller’s housing commissioner which gave the state power over rent regulation specifically, and thereby housing policy broadly, in New York City. Having irked affordable housing activists for decades, the law now counts the current mayor and a contingent of city council and State Assembly members among its opponents.

What do you make of the growing chorus of people calling for the repeal of the Urstadt Law? I can’t tell you how many State Assembly members and city politicians have come up to me over the years to say, “Thank you.” They don’t want to be responsible for what happens when taxes, and electricity go up, but the rent doesn’t—and then the buildings go into foreclosure. Secretly, they’re happy with the law, but many of them are getting votes for being unhappy.

New York was a very different place in 1971. Why is it still important for the state to control the city’s rent policies? In 1971, there were 72,000 vacant apartments and New York was in danger of becoming the biggest landlord in the city. Since we passed the Urstadt Law and vacancy decontrol, foreclosures went down and the value of apartments has gone up. If they do away with the law, it’s going to put the city back into the ownership business.

But almost everyone agrees that New York has a serious affordable housing problem right now. What should we do about it? If I had my way, I’d move to an open market. No one would be favored. Would you put rent control on cars? On food? The first rent control was put in during World War II, became effective in 1947 and since then it has discouraged two things: new construction and maintenance.

You oversaw the construction of many Mitchell Lama developments, including Co-op City in the Bronx and Starrett City in Brooklyn. Were they successful at providing affordable housing? Could a similar program be successful now? We put 140,000 or 150,000 people into apartments that they couldn’t otherwise afford and we did it by offering tax-exempt mortgages. The quid pro quo is that at the end of 40 years, the buildings go back on the open market. Trying to do it now wouldn’t work. The interest on mortgages is so low, it’s very close to tax exempt rates. It could work if the city was willing to forgo taxes on new developments, but the city wouldn’t like that.

You recently proposed filling in the Harlem River and building housing there. It was good for a laugh.

You don’t think it’s a good idea? I think it’s a terrific idea, but the opposition—I got letters and comments from the Assembly member and councilman whose district it was in and the environmentalists who said it would kill the fish. You get 800 acres attached to Manhattan. You can make parks, playgrounds, schools—it’s cheap. Battery Park City cost $800 per square foot to create. It would be a great boon to the city to fill in the Harlem River, but everyone says, “Oh, you can’t do it.”

Speaking of , you’re a big swimmer, right? Yes, but my shoulders are getting weak. I won the world championships in my category twice and one record still holds—the 50-meter breaststroke, 45.6 seconds, that I set in 2008, in Perth, Australia.

Is that your favorite stroke? It’s my only stroke. I used to be a butterflyer when I competed in college, but it’s bad for your shoulders. After I graduated, I coached for two years, then took up the usual running and tennis for the next 40. In 1999, my son-in-law said, “Why don’t you take up swimming again?” I couldn’t do the butterfly anymore, so I started doing the breaststroke and found out that I was pretty fast. 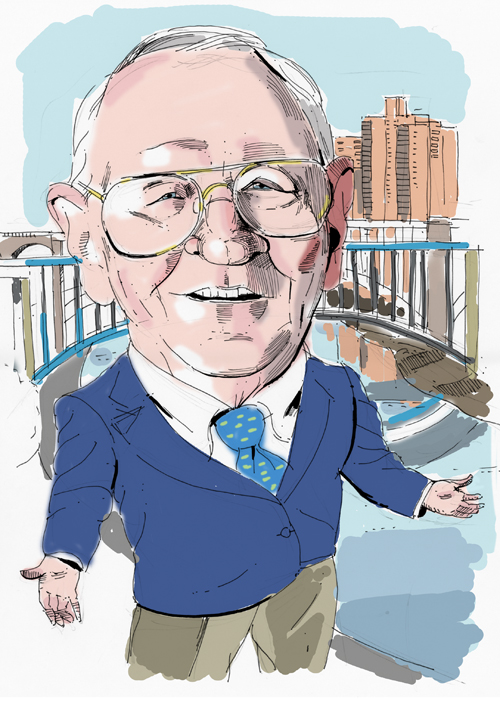