During the first season of Fox’s Sleepy Hollow, I couldn’t figure out what made it so good. The story of the Headless Horseman has never really appealed to me as a horror story, mainly because the protagonist, Ichabod Crane, comes off as such a wimp. (The Tim Burton movie didn’t help much with that either.) Of course, in this updated version, Ichabod is the sexy, pantaloon-wearing Tom Mison, a former colonial spy under General Washington who has Rip Van Winkled his way into the present day in order to stop the four horseman of the Apocalypse. He’s paired with another “witness,” Abigail Mills, whom Ichabod calls his “leftenant.” It’s adorable.

The show is full of ship-able moments between Ichabod and Abbie, and has plenty of site gags (more in the first season, actually) and Easter Eggs for the super fans. Ichabod’s continued inability to grasp modern day life is also a source of constant delight.

But as much as fans loved the show, there was still an indefinable quality to it that I found, if not unwelcome, different. It had its own rhythm, its own horror comedy logic and pacing, that felt different than I was used to. It threw me for a loop. And I’ve just realized what the issue is. Sleepy Hollow is not a Joss Whedon production.

I don’t mean that in a snarky way at all. I loved Buffy the Vampire Slayer and Cabin in the Woods and, well, no, I hated The Avengers, but I liked Firefly and once took an Ambien before watching Serenity so that kind of counts. But Buffy, that was huge for me. I loved the Whedon-y dialogue, which is usually described as self-aware and hyper-intelligent, with a lot of made-up adjectives and verbs ending in “-age,” “-ness,” and “y.”  (“Getting all murder-y.”) It’s called WhedonSpeak and it’s lovely. It’s also very silly.

Sleepy Hollow is more sensible that a Whedon show: if the latter’s avatar was a SuperFanGirl (or Mary Sue) fantasy cosplayer, the former would be a history nerd with a gothic bent. Though both Buffy and Sleepy Hollow traffic in the same genre, Sleepy Hollow takes itself a little more seriously: its characters aren’t self-aware that they’re in a horror plot, and they rarely crack wise about how ridiculous their life is. They don’t have chummy relationships with the villains of the show, because “Hey, why not? We’re all putting on this production together for an audience, right?” No one is just going through the motions on Sleepy Hollow.
[youtube https://www.youtube.com/watch?v=zMv0abh4Vrc]

At times, this can make Sleepy Hollow feel like a more conservative show than Buffy or other Whedon productions: an arcane throwback to a time before characters would deconstruct their own plots while subverting cultural tropes. (See also: Wes Craven, Kevin Williamson, Rob Thomas of Veronica Mars fame, etc., etc.,) It can be a liability too…how seriously are we supposed to take a show about a headless horseman, who is, in the end, a totally goofy figure?

Ironically, it’s exactly this self-seriousness that makes Sleepy Hollow feel like a breath of fresh air. Instead of having the characters ponder existential questions about the point of it all, they fight bad guys and get into historical revisionist subplots involving a dickhead Ben Franklin. The plot drives forward on a pretty standard episodic arc, not getting sidetracked by its own chaos or absurdism, allowing the writers to focus on dialogue that only at times verges into silly territory.

It’s easy to see that Sleepy Hollow is resonating, both in the ratings and the smaller (but louder) Internet fandom community. Much like Ichabod Crane himself, Sleepy Hollow has traveled in time to bring us a show that is both old and new; completely familiar while feeling like a breath of fresh air. And I, for one, couldn’t be more ready for it.

Stop being silly, Sleepy Hollow. You’re messing up my point.

Oh, who am I kidding. I could never stay mad at you, Ichabod. 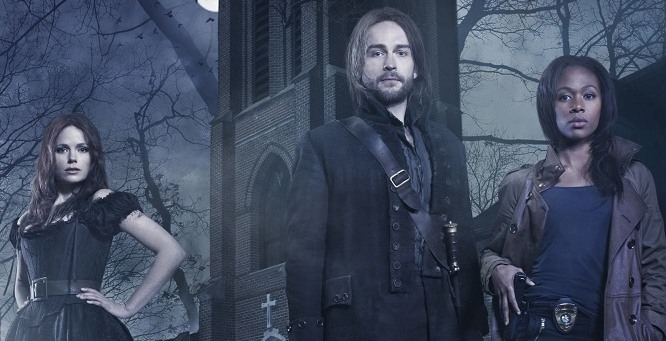