I’m just going to put it out there: after 12 years of Top Chef, sometimes it can feel like they’re really reaching to make a theme work for a challenge.

That occurred to me twice during last night’s episode, which began with a Paul Revere-themed Quickfire and ended with a teamwork challenge to feed Boston’s first responders to the marathon bombings.

But the episode begins with our first peak into this year’s Top Chef house, where contestants are beginning to get to know (and in some cases hate) each other. We learn in the first few minutes that one chef, James, has a large tattoo on his arm of Patrick Swayze — whose general awesomeness Rigato takes as inspiration. So this guy is going to be great.

The Quickfire requires chefs to recall a famous line from Paul Revere’s ride through Boston — and luckily for those of us who did not want to watch them cook steak and kidney pie, it wasn’t “The Bristish are coming.” Instead, the Quickfire theme is “One if by land, two if by sea.” The chefs have to cook with ingredients from two tables — land and sea — some of which are great, like steak or scallops, and some of which are terrible, like Velvetta or fried crab snacks. They have to run and grab a new ingredient from the land table if one lamp lights up; they have to run to the sea table if two lamps light up.

It seems like we’re going a long way to mention Paul Revere just because we’re in Boston, that’s all.

And, to add another Boston factor, the contestants are cooking for celebrity chef Todd English, who has opened and closed several hot spots in Boston (and was recently hit with a DWI).

Having to grab multiple ingredients leads to some awkward food combos — one chef, Joy, puts out a plate with both beef and veal (a protein that will come back to haunt her). And Stacy, the Boston chef, loads up her plate with good ingredients, but fails to season her pork chop, which she also overcooks.

They end up on bottom. Up top? Katsuje, the fusion chef who struggled badly last week with making dishes too complicated, manages to combine a bunch of ingredients without going overboard. And our pal with the Swayze tat, James, has a hit with his mussels in boar bacon broth. Todd English doesn’t really do much during this challenge, but he says: “The wild boar, I think you handled that really, really well.”

That’s enough for James to win a $5,000 bonus, but there’s no immunity. James says he won’t complain, as he had a tough upbringing: “single mom, trailer park.” I hope Swayze continues to give him strength.

For the elimination challenge, our chefs are going to serve first responders, and they meet the city’s police and firefighter commissioners, with accents directly out of Boston central casting.

Now here’s where the theming really begins to stretch the limits of credulity — the chefs will have to work in teams to “respond to a different set of ingredients.” Ok, teamwork, I can buy that, there was a lot of teamwork at the marathon bombings and teamwork also matters in a kitchen. But responding to a basket of ingredients, as if it’s an emergency? One chef, Adam — who recounts his mother surviving 9/11 — says he hopes to repay first responders with perfectly cooked steak. (Not to mention using a “mystery basket” in an Elimination Challenge feels very Chopped.)

Right away, it’s obvious which team will have the biggest problem working together as the theme requires — Aaron, who loves molecular cooking, and Keriann, the bubbly blonde who cooks simpler food and who Aaron has been making fun of since last week. Poor Stacy is stuck is stuck on the team in the middle.

Before they even know what they are cooking with, they start arguing over what to make and calling each other names. (But don’t worry guys, Aaron says when he’s being an asshole, we’ll know about it.)

There’s other team drama, too. Mei, who won last week, is surprisingly nasty about her teammates, Katie and Katsuje, because they were at the bottom last week. “When Michael Voltaggio is out of town, I run his restaurant,” she name-drops. “So I’m gonna take everybody’s opinions into consideration, but I don’t want a mish mash of shit on a plate.”

On another team, Joy backs down on something she will regret — she wants to take veal off the bone, her teammate object and then toss out another crazy idea to use vanilla in a salad. “I’m having to censor my opinions about some of the directions the dish is taking, but I want to support the team,” Joy says.

But it’s Keriann and Aaron who steal the show in the not-here-to-make-friends department, completely incapable of working together as a team to make a cohesive dish. Sure, Mei was cranky about her team at the start, but she eventually gets over herself and they put out a great dish together that the judges love. The Keriann and Aaron team, meanwhile, is the total opposite. The bickering never stops, and it completely derails their food. Stacy, stuck in the middle of them, serves as a great stand-in for the audience: ignoring them, rolling her eyes, pantomiming shooting herself in the head.

Both Aaron and Keriann end up embracing what the other one thinks makes them awful — over-the-top technique and underwhelming simplicity. Aaron wants to make a weird molecular jelly with chorizo, bourbon and agar agar. Kerriann spends two hours making a raw corn salad. They argue over having onions in both dishes.

Stacy, meanwhile, cooks the chicken. Chicken. It’s easy. And still — even as their own components of the dish are falling apart — Keriann and Aaron obsessively bother Stacy about the chicken.

“I’m just cooking chicken,” she says when they bug her about it. “All it is is chicken.”

This year’s season features immediate feedback, which is fun but sort of jarring, and Tom just rips the rest of the dish right to the faces of the chefs. That molecular relish Aaron made? “I don’t even know what this is, but it’s not good.” But the corn doesn’t escape his wrath: “The garnishes on this plate were terrible. Both.”

Aaron tries to blame Keriann — who told him not to make the relish, or at least to just reduce it in a saucepan like a normal person. Gail says the team communicated only through onion, which was my favorite line of the night. To prove her right, they devolve into further bickering. In the stew room, Keriann says Aaron is a “lying sack of shit.” He says he could cook her “under the table.” They are awful.

About the stew room: This whole dynamic is thrown out of whack by the judges offering more direct feedback while eating, and then less feedback at judge’s table. It sort of shifts the stewing time — obsessing over what the judges said, drinking and worrying — to the moments between tasting and judging, which happens faster and in front of everyone. I’m not sure what we gain from this change — except that maybe it will prevent what happened in last year’s finale, when the judge’s spent hours making their pick (and many feel settled on the wrong choice).

Lucky for the bickering chefs, the judges also hated the vanilla veal dish — unsurprisingly, they immediately said the veal was undercooked (poor Joy should have followed her gut and taken it off the bone!) and the vanilla was overpowering.

Judge’s table reminds us how much more fun the losers are than the winners. We fly through the good stuff — Mei’s team comes in second to Adam, Gregory and Rebecca’s tasty surf and turf that effectively honored the first responders — and we get right back to the bad chefs.

The Aaron and Keriann team was “from the get-go doomed to fail,” Tom says. Why would you even use agar agar to make a jam when you could just make a jam in two hours? Why would you taste starchy corn and then serve it raw? And yet, Stacy’s chicken, which they all doubted, saves them.

The veal team is on the bottom (perhaps because they are less entertaining). Tom notes they had sort of the opposite problem — getting along too well. “You may have had a problem with someone not saying no.”

Joy realizes almost immediately she’s getting eliminated, and it feels a little sad, since she wanted to take the veal off the bone and she is so much less terrible a human than Keriann or Aaron. But keeping quiet did her in.

“I have a really fat mouth and for some reason, I just like tucked it away for this competition — and that was so dumb,” Joy says.

Somehow, I don’t think that’s going to be a problem for Aaron. 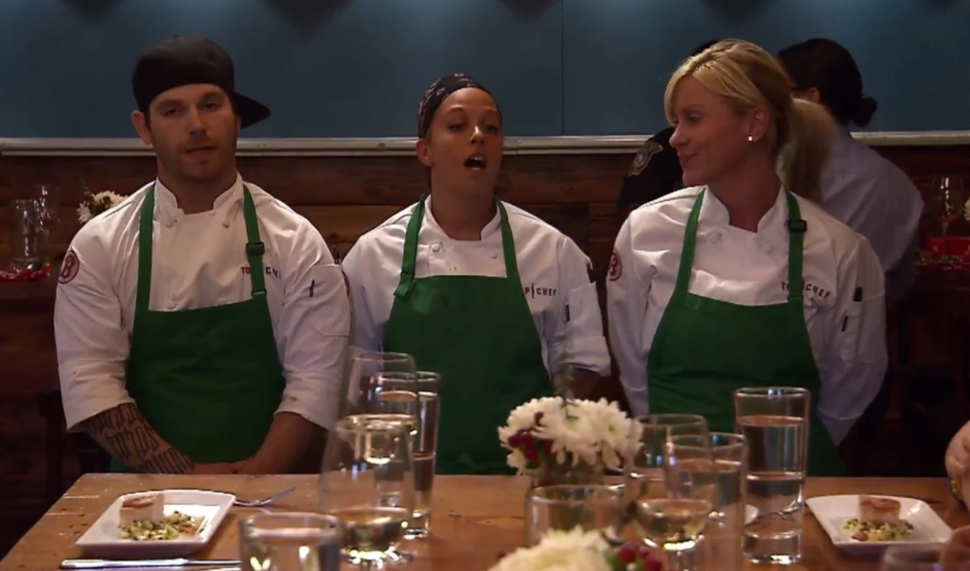