It’s time for me to share one (relatively) minor gripe about Transparent: season one is busy. It’s not like I don’t understand the impulse – thirty minutes isn’t a lot of time, and there’s so much ground to cover; Soloway has lots of stories she wants to tell; the ensemble cast of characters all need their own stories to unfold at roughly similar paces – and the show is so strong that the jumpy storytelling doesn’t normally bother me. But “Wedge” is one episode that highlights the frenetic atmosphere in a particularly jarring way.

For example: does anyone else feel like the writers have a checklist of Transgender Experiences that they want Maura to speed through like a relay race? In the first half of the season, Maura has come out to two of her children, moved to a largely queer apartment complex, experimented with her hair and makeup, developed a close friend in the community, and suffered the indignity of bathroom discrimination. In “Wedge,” she takes her first estrogen pill, decides to sign up for the Trans Got Talent performance night at the LGBT Center, and faces a new humiliation when a friend from her past sees her out in public. That’s a lot for one woman to experience in a relatively short amount of time, and in particularly busy episodes like “Wedge,” I find myself wishing that the plot development could slow down, to allow for Maura’s transition journey to take its time.

All that said, Maura’s personal growth is gradually taking shape, and it’s beautiful to witness. In “Moppa,” she wasn’t ready to stand up for herself when she encountered bigotry in the Beverly Center’s public women’s restroom. In “Wedge,” when old squash partner Gary (John Kapelos, A.K.A. the janitor from The Breakfast Club) approaches the restaurant table where Maura is dining with Davina and Shea (Trace Lysette), Maura is prepared to fight back against any barbs he throws her way. When he looks at her up and down and dismissively asks, “What’s all of this?” Maura keeps her cool and lists all of the accessories she’s wearing. When he starts to laugh, she motions for him to lower his voice. And when he asks “No hard feelings?” she graciously shakes his hand while shooting daggers with her eyes. This is not the Maura who is afraid to come out to her children. This is the Maura who is finally comfortable enough in her skin to own it with pride, regardless of how thoughtless and rude the people she encounters can be.

More storylines converge at Shelly’s house, when Ed disappears. His dementia prevents him from speaking or eating much and causes him to wander out of the house and around the gated community without warning. Ali is the only one who shows any genuine concern for his whereabouts, a fact that fills her with resent for her mother and siblings. Sarah and Josh are too caught up in their own lives to care much; Sarah is busy redecorating her new house with Tammy and hiring Tammy’s daughter Bianca (Kiersey Clemons) as their “summer girl,” while Josh is busy sleeping with “the biggest-titted real estate agent in all of Los Angeles” and trying to sell Maura’s house from under Sarah and Tammy.

As tensions climax, the last two Pfeffermans find out about Maura’s transition. Ali and Sarah tell Josh over Bloody Marys, though something is clearly lost in the translation (Sarah is quick to correct him later, when he refers to Maura as a “fucking transvestite”). Then the siblings return to Shelly’s, where she is telling Rabbi Raquel Fein (Kathryn Hahn, in what is perhaps the best supporting role of the series) about how handsome Josh is, rather than looking for Ed. When Josh asks Shelly if she knows about Maura, she responds as if it’s always been common knowledge. “It’s his thing. It’s his little private kink,” she tells the kids. While clearly a gross misunderstanding of what being trans is, Shelly’s reaction suggests a lot about what might have gone on during her marriage to Maura and perhaps why the marriage eventually ended. And, to her credit, while referring to someone’s gender identity as a “kink” is awfully minimizing, she says it with affection. She doesn’t seem disturbed by Maura’s identity – in fact, she sounds far more comfortable with it than her own children do. All their years apart may have done wonders for their relationship.

Josh, sloppy drunk from his Bloody Marys, decides to make things even more awkward by bringing up Rita. “Oh my god, it’s so obvious now why Dad wasn’t around,” he says to no one in particular. “It’s because he was playing Little Bo Peep. But what about you, Mom? What’s your excuse? You got a little secret that you were doing while you were paying Rita to distract me with her tits?” Now, this is a perfect example of why I wish Transparent would slow down the storytelling just a bit at times because, good lord, that is a damning accusation, and it is treated as little more than another aspect of the chaos. Sure, Shelly is upset and cries, “Why are you humiliating me like this?” but that’s it. Are we to believe that Josh is taking his trauma seriously and implicating his absentee parents in his abuse? It’s hard to say, because he’s not given any time to elaborate.

Ed eventually returns, totally on his own, carrying a caricature of himself in one hand and cotton candy in the other hand, making him quite possibly the sweetest and most likeable character on the whole show. By that point, the Pfeffermans have all but completely fallen apart. Maura is embarrassed about her run-in with Gary; Shelly has been humiliated in front of her Rabbi; Josh is not coping well with the news about his Moppa or his newfound understanding of Rita; Ali feels let down by her family; and Sarah is too caught up in the chaos to be a voice of reason. In the commotion, though, there’s at least some common ground established. With so many secrets now out in the open, the healing and growth that this family has so desperately needed can finally commence. 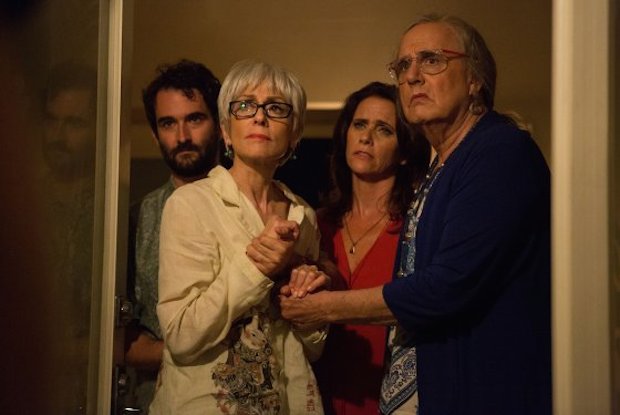