I have been waiting for the right moment to write about Transparent’s opening credits, and mentioning them by way of introducing “Best New Girl” feels fitting Not because the credits of “Best New Girl” are slightly altered – rather than the piano score that plays at the start of other episodes, Bob Dylan’s “Oh, Sister” welcomes the viewer this time – but because the archival footage has added poignancy in the context of this particular episodes. The Transparent opening credits feature a montage of home video footage from the early 1990s, shot at what appears to be Bar Mitzvahs and other family events, intercut with clips from the 1968 documentary The Queen. Long before Jenny Livingston’s Paris is Burning, The Queen depicted the realities of drag ball culture, taking a snapshot of a queer subculture and bringing it to the mainstream.

I must admit that, when I started watching Transparent, I was unnerved by the inclusion of The Queen, particularly as a way of setting the tone for the show, because Maura is decidedly not a drag queen. While transgender women, cross-dressers, and drag performers may share some similar attributes and experiences, to conflate those identities is to miss how distinct they truly are, which serves no one. Given how excellent the portrayal of trans identity has been on Transparent, the opening credits have been one aspect of the show that perplexed me.

That is, until “Best New Girl” put them into a totally new context.

The entire episode is a flashback to 1994. Mort and Shelly canceled Ali’s Bat Mitzvah, at her behest, and now Mort is taking that weekend to leave town for a “surprise” academic conference. Or, at least, that’s what he tells Shelly. In reality, he and Mark are sneaking away to attend Camp Camellia, the cross-dressing camp in the woods, so that they can indulge in their inner selves for a whole weekend, free of judgment or fear of being caught.

The first night is bliss. Maura and Marcy meet friendly camp attendees at an opening cocktail party. They become particularly friendly with Jackie (Pat Towne) and Connie (Michaela Watkins), a married couple who always attend camp together. “I didn’t know that wives were welcome here,” Maura asks, to which Connie responds, pleasantly yet bitterly, “We’re tolerated here.” Still, Connie manages to fit in, and she and Maura strike up a friendship.

Tensions mount the following day, when Maura and Marcy ride their bikes to a pay phone in order to call home. Marcy calls first, and when her voice reverts back to Mark’s, everything about her changes. Her posture becomes more masculine and comfortable, she makes crude remarks, and she tells her son to “man up.” Later, at lunch, Jackie tells Maura and Marcy about Ramona, a former camper who was banned from Camellia for bringing estrogen. “She had the nerve to bring hormones to cross-dressing camp!” Connie exclaims. “We are cross-dressers, but we’re still men,” Jackie continues. Marcy, Jackie, and the others toast to being “men in skirts” while Maura glances away uncomfortably. When the subject of Ramona comes up again later, Maura has to bite her tongue when Marcy explains what Camp Camellia is “for”: “This is a place for expressing your femininity. Transvestites are not transsexuals. Never the twain shall meet. They should be in a different place.”

These incidents – and Maura’s responses to them – make it clear that, prior to attending Camp Camellia, Maura really did not know the difference between her identity and Marcy’s. She felt a kinship with Marcy based on the magazines they read and the outfits they wore in private. She may have very well felt a connection with the drag performers depicted in The Queen, a film released when she was younger. For much of her life, Maura had no way of talking about or understanding the desire she felt, so she assumed it must have been the same as the desire that others were feeling.

But now, she sees that this isn’t true. She would never tell Josh to “man up,” nor would she ostracize anyone who brought hormones to camp. Furthermore, she much prefers Connie’s company to the company of self-proclaimed “men in skirts.” Identifying as a man in women’s clothing is a lie for Maura. Identifying as a woman is the truth.

When the Camp Camellia weekend comes to a close, Marcy changes back into Mark-attire before leaving the campground. Maura remains dressed in women’s clothes, much to her companion’s horror. “It’s not safe,” Mark insists. “It makes me happy,” Maura tells him. “I want to be happy for two more hours.” Mark argues with her, but it’s no use. For the first time, Maura truly knows what she wants, and no one is going to get in the way of her realizing that.

The drag queens in The Queen are not the trans women in Transparent. The writers clearly know this, and to interpret the inclusion of The Queen in the show’s opening credits is a mistake. Rather, The Queen represents one stage of Maura’s journey, a stage as much a part of her past as the home movie footage we see. Over the course of Maura’s life, she has explored various avenues in search of the best way of understanding herself. Embracing drag and the cross-dressing community was one such way. But that is all behind her. Now, we are able to follow her as she moves beyond her history and embraces her future as the best new girl she can be. 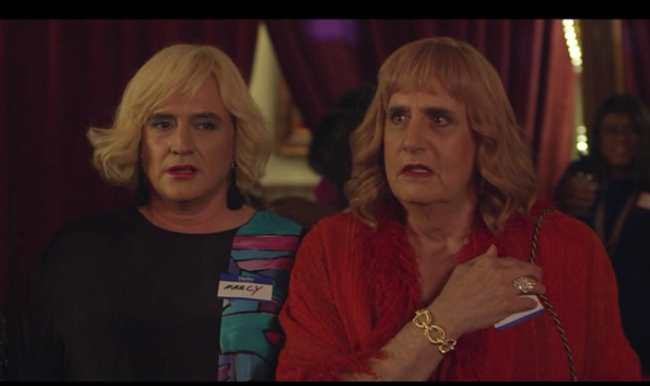