A judge delayed the start of Congressman Michael Grimm’s trial on charges of wire and mail fraud until February in Brooklyn federal court today — but it might not be the only trial Mr. Grimm is facing.

Prosecutors said today that if Mr. Grimm seeks to dismiss three charges against him — two counts of perjury and one of obstruction — because they occurred outside the jurisdiction of the Brooklyn court, the U.S. government would reintroduce them in Manhattan.

“In effect, the venue motion is really a severance motion of the perjury and obstruction counts,” prosecutor James Gatta said. “It will effectively result in two trials for the price of one. We’re quite happy to oblige the defendant if he wants two trials.”

But Judge Pamela Chen didn’t make a final ruling on dismissing those charges — at the urging of Mr. Grimm’s lawyer, Jeffrey Neiman. The judge was prepared to dismiss the three charges without prejudice, but Mr. Neiman asked the she hold off, as the defense is hoping she’ll dismiss the charges — and others — with prejudice after considering their argument that the prosecution of Mr. Grimm is “selective and vindictive.”

“It is possible we are going to ask the court to dismiss those counts with prejudice,” Mr. Neiman said.

The three charges at issue stem from Mr. Grimm allegedly lying under oath in response to a civil lawsuit filed by employees of his health food restaurant, Healthalicious. If they are dismissed, Mr. Gatta indicated they’d be reintroduced in New York’s Southern District, overseen by U.S. Attorney Preet Bharara.

The rest of the charges against Mr. Grimm also stem from his running of the restaurant — including allegations that he hired undocumented immigrants and paid them in cash to avoid taxes.

After unsuccessfully asking the judge several times to push back the start of Mr. Grimm’s trial on the grounds that negative campaign ads would poison the jury trial, Mr. Neiman finally got his delay today — but for different reasons. He convinced the judge he needed more time to listen to over 100 hours of tape the government had acquired of potential government witnesses — including jailhouse telephone conversations in a foreign language — to determine whether the material might be useful to the defense.

But Ms. Chen denied the defense’s requests to compel the government to answer questions, or hand over evidence, about what the defense has deemed a “selective and vindictive prosecution.” Ms. Chen said Mr. Grimm — whose lawyer have also asked the charges to be tossed on those same grounds — hadn’t provided enough evidence such a campaign exists.

“The evidence that Mr. Grimm suggests is actually not evidence, but rather amounts to unsupported and random speculation,” Ms. Chen said, though she didn’t yet rue on the motion to dismiss, just the motion to gather evidence.

Mr. Grimm’s original questions for the U.S. attorney’s office regarding a selective prosecution centered on Todd Kaminsky, the U.S. attorney first charged with leading the case against him who resigned to run for office as a Democrat. In court today, Ms. Chen also highlighted several other reasons Mr. Grimm’s lawyers argued a search for evidence of selective prosecution was necessary: that he was a Republican (Ms. Chen pointed out many recent corruption cases in the district were against Democrats), that others charged with running cash businesses are not routinely charged, and that the charges were “initiated by an FBI agent who had prior employment relationships with a close associate of a rabbi whose followers were the source of the anonymous accusations against Mr. Grimm.”

“Frankly, on its face, that one is a difficult claim to follow,” Ms. Chen observed of the rabbi argument — likely referring to Mr. Grimm’s relationship with Offer Biton, an aide to a mystical Jewish rabbi.

Jury selection in the case, meanwhile, is slated to start early next year, with a questionnaire set to be given to some 300 potential jurors — all in order to find 12 jurors and four alternates.

The court hearing today comes exactly two weeks before Mr. Grimm is up for re-election in a tight race against Domenic Recchia Jr. for the congressional seat representing Staten Island and part of Brooklyn.

On his way out of court, Mr. Grimm refused to answer questions shouted by reporters — staring straight ahead and declining to even make eye contact. 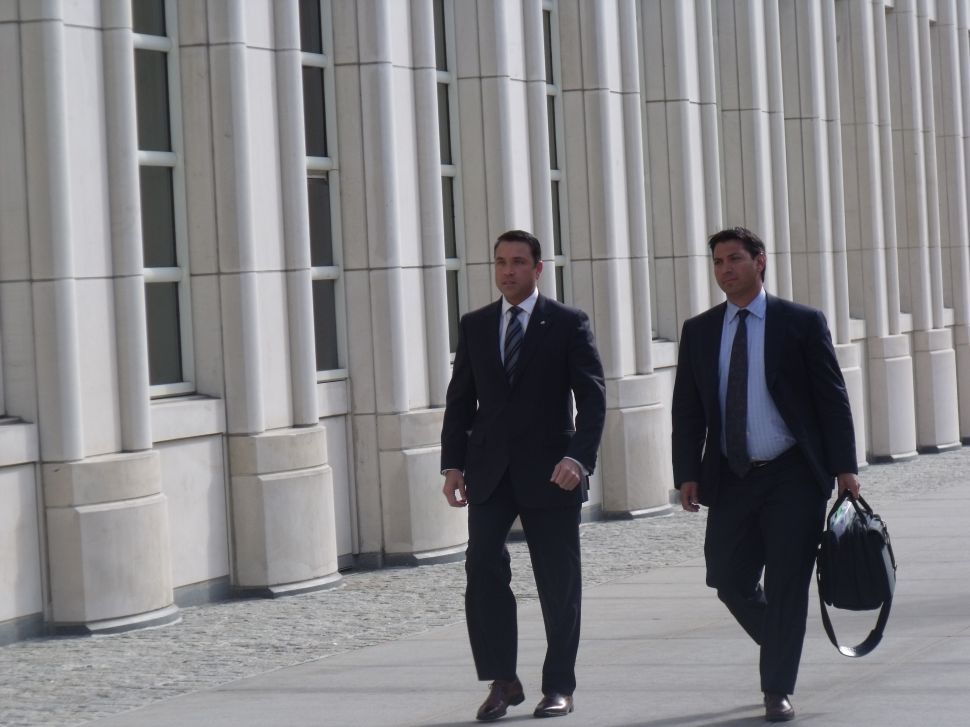