Molly Ringwald made her reputation 30 years ago, in all those forgettable, I.Q.-diminishing John Hughes teenage Brat Pack flicks—Pretty in Pink, The Breakfast Club, Sixteen Candles. Gone are the freckles dotting her face like crushed Grape-Nuts and the red hair like a pepped-up Orphan Annie. Gone, too, is the movie career. What to do next? She made a brief detour in the theater, in Cabaret, How I Learned to Drive and Enchanted April. Now she’s blonde and svelte and making an appearance at the Café Carlyle as a jazz singer. Nearing 50, she’s all grown up, a wife of 14 years and the mother of three children. But she is not, by any stretch of the imagination, a jazz singer.

The daughter of a jazz aficionado, she listened to great songs and great singers for years and learned a lot from her father’s record collection. But there’s more to jazz than singing behind the beat and flatting the last note of a stanza. She snaps her fingers, keeps time with her high heels, and gives her terrific trio—Trevor Ware on bass, drummer Tony Jefferson and ace pianist-arranger Peter Smith, a solid, bona fide jazz musician who swings in chords, like Oscar Peterson—plenty of room for solos. But popping your fingers off the downbeat and singing all the right tunes does not make you a genuine jazz stylist. The tunes are nice, and she sings them in tune, even if they are all sung at the wrong tempo. “I Thought About You,” which she dedicates to her kids instead of an absentee lover, gallops at too fast a clip, like the third race at Belmont. I hardly think Jimmy Van Heusen and Johnny Mercer wrote it for children. “Brother Can You Spare a Dime,” Yip Harburg’s disturbing political ode to the Depression, is so cheerful it defies the lyrical intention of the song. Shouting it out like it was “Alexander’s Ragtime Band” misses the point entirely. “I Feel Pretty” is faster than “The Minute Waltz.”

Dark songs are an important part of any authentic jazz singer’s repertoire, but she rarely goes there. Billie Holiday’s “Don’t Explain” is an exception, with Trevor Wade’s string bass adding the sound of a melancholy cello, but Hoagy Carmichael’s wistful “I Get Along Without You Very Well” is what I call colloquial singing, with no identity of its own. Ms. Ringwald has grown into her body makeover, but her singing is so breezy and bouncy there’s not much room for pathos. She doesn’t alter lyrics, bend notes or put any kind of distinctive stamp of her own on the material. She deserves praise for preserving standards from the Great American Songbook instead of promoting the kind of run-of-the-mill rock and roll junk her other Brat Pack buddies grew up on, but there’s no indication Molly Ringwald has mastered the jazz idiom in any fresh or instructive way. You wouldn’t rush to see her in order to learn anything new or original. What’s there is already there. It’s been around for years. 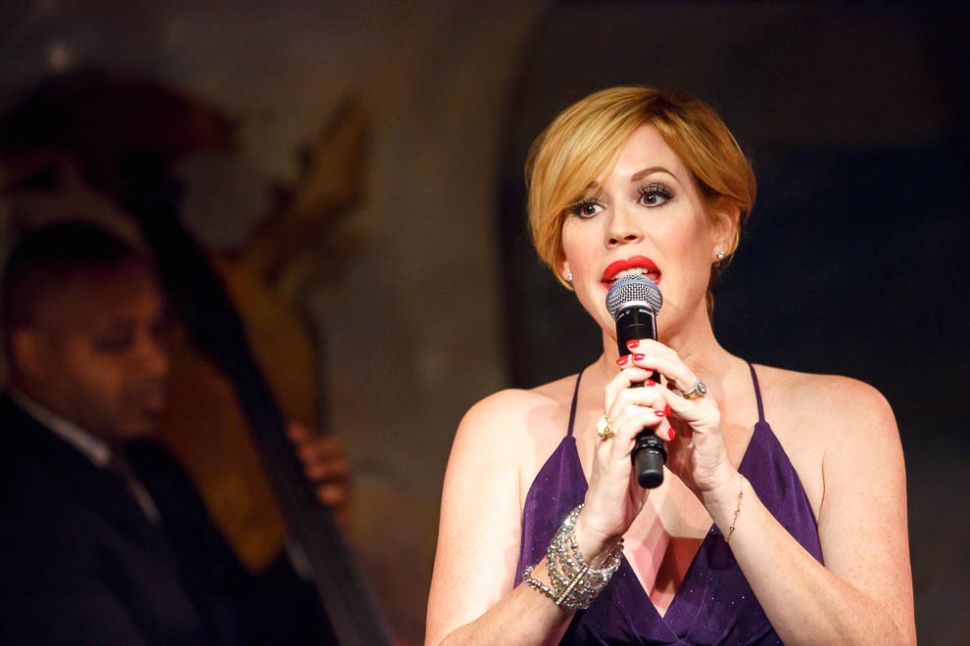