Love triangles. Babies. Two mothers with one son. A sleaze ball and his ingénue. Once Upon A Time is your quintessential soap opera with a twist: magic. It’s the show we watch with our girlfriends while munching on Pringles instead of going out on Sunday night. We’ll never admit that we’re diehards, but wait—did Emma and Hook just kiss?!?!

Drenched in drama, OUAT quickly becomes an addiction. It’s juicy, but it’s got pulp, too. From the very beginning, the nuanced characters have provided quality crap entertainment. When Snow and Charming share an intimate moment, it’s more than heartwarming. Henry is everyone’s favorite “it” kid, and even the Mad Hatter is crush-worthy.

But perhaps the most enticing part of OUAT is its dark side. The creators have taken the stories of our childhood and drawn on their more mysterious roots, just as the Brothers Grimm intended. Snow is a huntress. Belle is more than a pretty face. Even Aurora isn’t completely empty-headed. And not everything is perfect in paradise. People die. People cry. It’s a world that we can get behind because despite all the spells and potions, it’s almost real.

That’s what makes Once Upon A Time so cool. It’s redefining the classics. In the ’30s, Disney came along and gave princesses squeaky little voices. He had them sweep and sing, sing and sweep. That’s just no good. If the originals were misogynistic, at least they were a little more complex. OUAT takes those complications and gives them a 21st-century makeover. After all, it’s about time that we see Snow White as more than a blithering idiot.

Maybe Edward Kitsis and Adam Horowitz thought they had exhausted the archive of fairytales and folklore. Or, even worse, maybe they were worried their ratings needed a bump. For whatever reason, they’ve incorporated Frozen’s Elsa, Anna, and Kristoff into the mix, whose hit movie is the reason for many a drunken version of “Let It Go.”

Frozen is great. It’s Disney’s biggest blockbuster in a while, and toddlers and teens alike can get behind it. There’s definitely more enthusiasm for snowmen these days, and Elsa look-alikes are almost always trending on social media.

But… it’s not classic! There’s nothing timeless about it. It’s one of Disney’s newest female-empowerment films, which is awesome. But it’s a year old, and it’s already a different view on The Snow Queen.  There’s no need for an update on an update.

And it’s not even a good addition. It dominates the hour-long drama as Frozen 2: Live Action, and the themes are corny and repetitive. We get it: Elsa struggles between good and evil and never feels like she fits in. That point was made in Episode 1, so why keep gnawing at it?

OUAT is on its fourth season. The first was spectacular. The second was fine. Let’s not talk about the third. It’s rolling toward that place—you know, the one where TV goes to die. That the writers are trying to throw in new plotlines is only strategic.

So why not look to another one of Hans Christian Andersen’s mythical lands? Or check out the Brothers Grimm’s expansive collection?

For OUAT, Frozen is a selling point. (Ed. note: Kind of like how Dazzler was only introduced to X-Men for a KISS tie-in. You’ve won this round, Disney.) It’s cheap. It’s not supposed to add anything to the script (and it doesn’t). Frankly, the purpose is to attract viewers. And so, of course, the ingenuity of the show has been corrupted by the desire for cold hard cash.

Well after three weeks of subpar writing, the appeal of OUAT is over for me. As Elsa waltzes around the screen during next week’s episode, I, for one, won’t be watching. 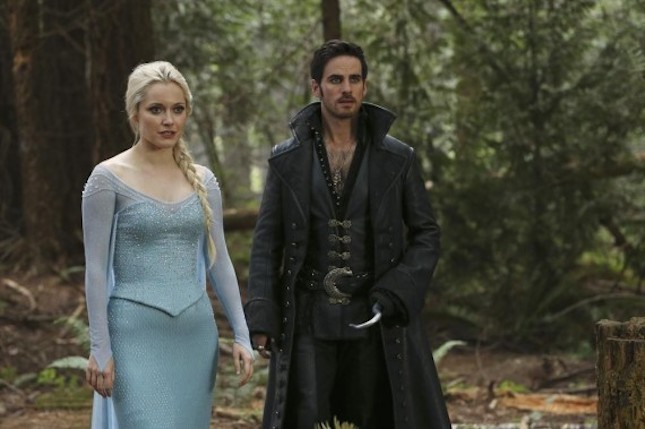 Filed Under: TV, TV, ABC, review, Frozen, Once Upon a Time