So HBO is coming out with a feature-length movie of Hello Ladies. And most likely, I’m not going to watch it. Sorry Stuart.

Hello Ladies, the half hour comedy series by The Office* co-creator Stephen Merchant, was highly anticipated around these parts** when it debuted last September. I’ve always been a fan of awkward British humor, and Merchant, with his bulbous eyes and gangly countenance, has been one of my favorite character actors/podcast people for years. Legitimately: I like him more than Ricky Gervais, though that in itself does not really speak of Merchant’s talent as much as it does his ability to not make everything about how he doesn’t believe in God. (For my part, I could care less about whether an actor is an atheist or Catholic or worships Cthulhu: I just don’t really need it shoved down my throat via a million “thought pieces” every. single. time.)

But for some reason, Hello Ladies didn’t do it for me. As Stuart, a British software designer in LA (where he’s either very, very poor or pretty well off…unclear!), Merchant’s character was a nasty combination of pathetic and cruel. So were his friends, his “will they or won’t they” love interest/tenant Jessica (Christine Woods) and just about anyone he came in contact with. For instance, one of his main romantic rivals was a guy named Knives, and the joke was that despite being wheelchair-bound, his charisma and charm won him more ladies than Merchant’s awkward passes. Isn’t it funny that a handicapped person can get laid more than a healthy, able-bodied man? Hilarious. Also, he was just the worst.
[youtube https://www.youtube.com/watch?v=yedk6Hdt0I8]

Maybe the show also just bugged me because Stuart wasn’t just petty, but spoiled. He believed all women should want him, and would get resentful when they didn’t immediately fawn over his advances. He was the worst kind of nerd, the type we’ve seen a lot of lately. Bitter and snide to cover his wounded pride over his romantic rejections…well, let’s just say we’d know where he’d stand on Gamergate right now. I mean, just look at the title of the show: he’s basically that catcall video in a British accent. Which isn’t to say that we shouldn’t have shows about terrible people; only that there needs to be some redeemable or compelling component that makes us want to come back week after week. Hello Ladies didn’t. Stuart was just a creep and a jerk.
[youtube https://www.youtube.com/watch?v=K56L07i9XsM]

However, I know some people feel differently, so if Hello Ladies is your thing, congratulations. Here’s the info for the movie.

When Stuart learns that his British ex-girlfriend is planning to visit Los Angeles with her husband, he sets out to impress them with his glamorous lifestyle, enlisting a Russian model he’s just met to play the role of his beautiful girlfriend. What could go wrong?

Starring Stephen Merchant (co-creator of the Golden Globe-winning BBC comedy series “The Office” and HBO’s “Extras”) as Stuart, HELLO LADIES: THE MOVIE wraps up his story when it debuts SATURDAY, NOV. 22 (10:00-11:20 p.m. ET/PT), exclusively on HBO.

*OG, not the one with Steve Carell.

Update: Sorry, one more thing. I want to address this point, made by Buzzfeed’s Louis Peitzman:

@videodrew But Stuart is supposed to be a creepy jerk. (Not saying you have to like it! But it's certainly not aspirational.)

This is 100 percent true: I don’t think Merchant or the show was condoning Stuart’s behavior. The problem was that even as Stuart was portrayed so hideously, there was no counterweight to make Hello Ladies redeemable. David Brent might have been a pompous ass, but we always had Tim and Dawn and their storyline to keep a little sweetness amidst all the sour. The problem with HL is that all the characters were either mean or pathetic: most both. And it wasn’t It’s Always Funny in Philadelphia, where the character are cruel but also sociopathic and total caricatures of human beings. Perhaps Hello Ladies didn’t work for me because it wasn’t outlandish enough: Stuart and his friends behavior was entirely believable, which made it just really, really painful and sad. 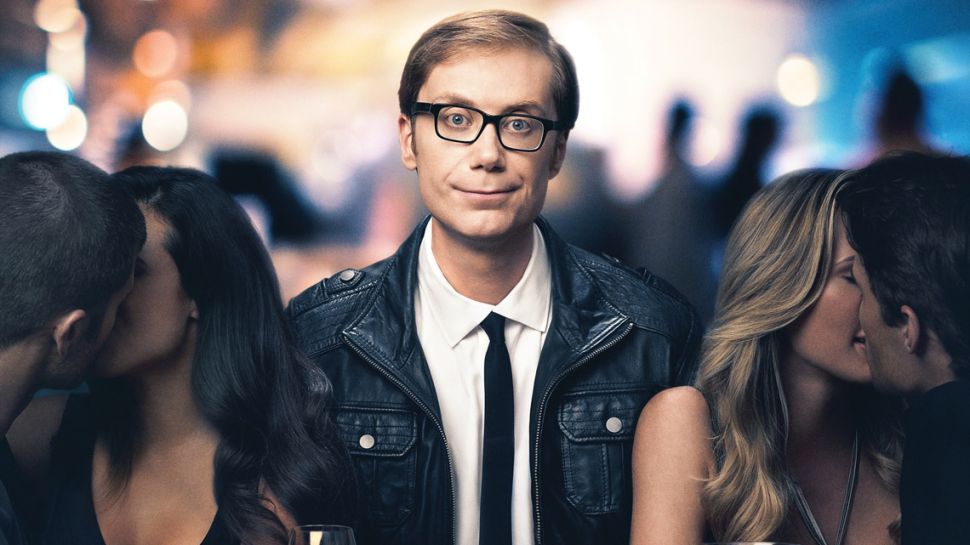