When I walked up to Nahmad Contemporary, the young dealer Joseph Nahmad’s gallery inside the art world citadel of 980 Madison, the door was locked. When a gallery assistant finally came to let me in, the inside of the gallery was dark, all the lights off, just a faint pink shade floating through the room. And when my eyes adjusted, it became clear the entire main space was empty of art to exhibit. There was just wall text announcing the exhibition: “STILL LIFE: Dan Flavin | Alex Israel”

Following that pink shade that crept through the room does, it turns out, lead to a real show, and despite the small scale, the intriguing pairing of the two objects makes this show (which sort of opened Friday, though there was no announcement, so did it open?) hold its own among those at 980-mates such as Gagosian Gallery and Venus Over Manhattan. The two works—Dan Flavin’s pink out of a corner (to Jasper Johns), 1963, and Alex Israel’s Lens, 2013—are both 8 feet tall and emanate a similar rosy hue. Though they were completed 50 years apart, they were both made when the artists were 30 years old. And, if the trajectory of Mr. Israel’s budding superstardom stays on course, it could be said the two artists of different eras made the pieces at similar stages in their careers.

Joseph Nahmad, who is certainly not yet 30 years old, came into the small room in the back of his gallery later Friday afternoon, after I had spent a good ten minutes marinating in the pink glow of the Flavin, with the light hitting Lens—an installation that’s nothing but one popped-out glass from a pair of sunglasses enlarged to massive height, very much keeping with Mr. Israel’s mission to deconstruct the always sunny Hollywood—and doubling the glow of the room, amplifying the effect.

“This is a different kind of show for me,” said Mr. Nahmad. “I’m so happy to show a Flavin. And Alex Israel is the young artist who I believe will emerge as the great one—I think he’ll be in the history books.”

He noted that pink out of a corner (to Jasper Johns) was part of Flavin’s first all-florescent show, at Green Gallery in 1964 (It was shown again, in its entirety, at Zwirner & Wirth in 2008 as “The 1964 Green Gallery Exhibition.”) This led to a discussion of the life span of a Flavin, as the tubes burn out with some frequency and need to be replaced.

“You think of it as a contemporary candle,” said, Mr. Nahmad, who was staring at the work, the pink alighting his face. “Eventually, it will die out.” 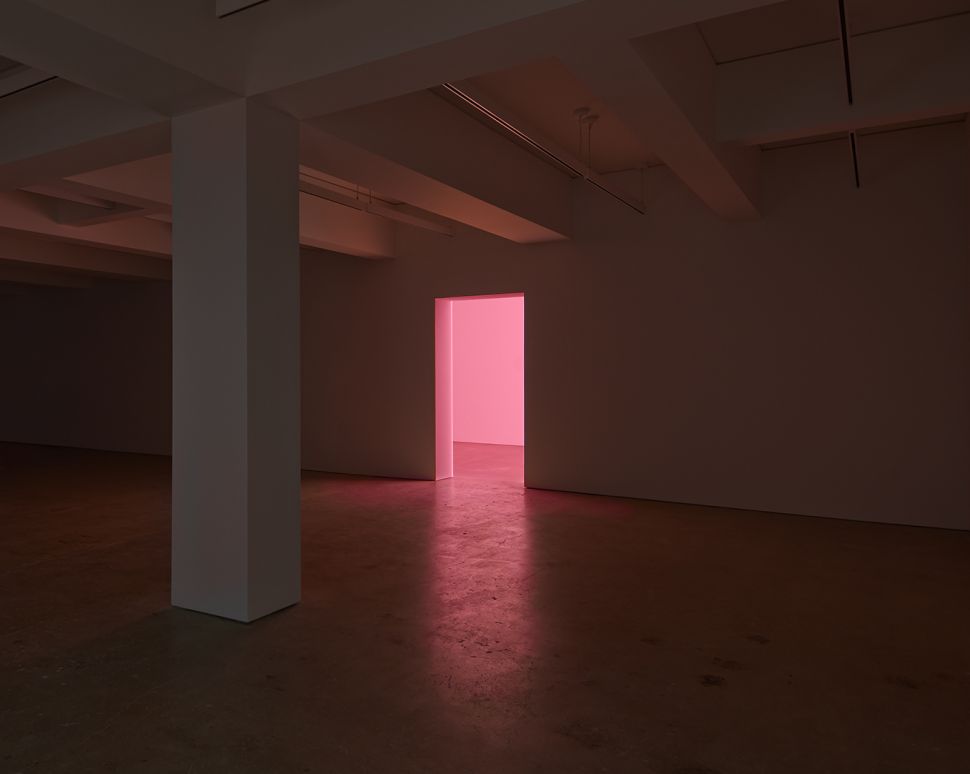