There’s nothing quite like a catcall—or 100—to make your day that much more sexist.

Just last week we reported that a Brooklyn artist has been transforming her catcalls into cross stitches, and yesterday, Hollaback debuted its exposé with film director Rob Bliss, in which volunteer Shoshana B. Roberts walks around the city for 10 hours with two mics in hand. Her dark jeans and crew-neck tee blend in with passersby, but for more than a few thirsty men, Ms. Roberts still stands out. Some benignly wish her a good day, while others woo her with whistles and derogatory comments. As one man pursues her closely for four minutes, occasionally throwing an awkward glance in her direction, she’s obviously not amused. And, even less so, when a guy who accuses her of being tight-lipped because she’s judging his appearance.

Mr. Bliss’ short showcases what a woman’s commute is like in a metropolis such as New York, but Hollaback’s website cautions that street harassment looks different given the demographic. The LGBTQ community and minorities are most prone to victimhood, when violence overrides sex as the harassment theme.

You know there’s something wrong with the world when you can’t even feel safe on your jaunt to Starbucks. 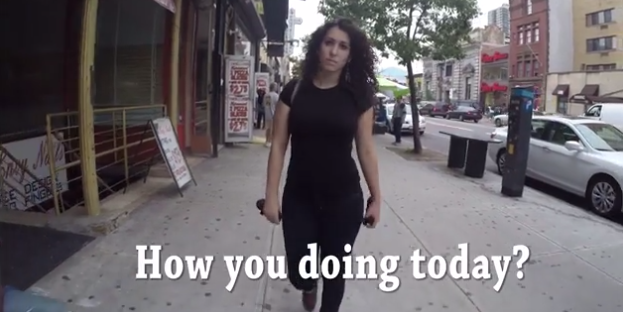