We know. Birds two days in a row? How gauche. But the only other suggestion we got for today was the dog from 7th Heaven, because the world is horrifying and the only way we can cope is through flippant humor and pictures of animals.

At least the ducks know the impermanence of life: as the days grow shorter and the leaves begin to fall in your New Jersey backyard, these avian nesters will take flight to a warmer climate, leaving a broken man alone in his pool, like a character in a Cheever story, if Cheever liked to write “Bada Bing” a lot.

Why were the ducks, “from Canada or someplace,” as Tony tells his therapist, so important? What did they mean to this head of a New Jersey crime syndicate? Why did their absence trigger his first panic attack? In the pilot of The Sopranos, we discover that Tony might have the exterior of a gruff grizzly, but the soul of a poet because he was touched, in a deep, existential way, by this fluffy little family.
[youtube https://www.youtube.com/watch?v=rOJ8pBoZXCg&w=560&h=315]
Sure, you can say that it’s always some symbolic imagery that triggers so many cinematic (and television-y?) mid-life crises: the roses from American Beauty, the frying bacon of Nucky Thompson, the everything that Don Draper comes in contact with. But Tony’s ducks seemed more telling, somehow: that this big bad mobster could be brought to his knees, gasping in realization of his own mortality (or whatever) by a family of adorable ducklings. I bet there were some people out there who probably won’t admit it, but on first viewing of The Sopranos thought to themselves “Dude, grow a pair.”

But the wonderful thing about the ducks was that they were unaffected by the life of Tony Soprano. They didn’t spend every Sunday glued to the TV, and they didn’t take to the Internet with their feathers ruffled because David Chase chose Journey over a pat ending.

That is because ducks notoriously don’t order HBO as part of their premium TV package. They’re Showtime subscribers.

Let us all take a lesson from the ducks today and turn off our TV. Go outside. Migrate south. Go Home.

Also: never give a duck your HBOGO password because they’ll just lose it. They’re super flighty. 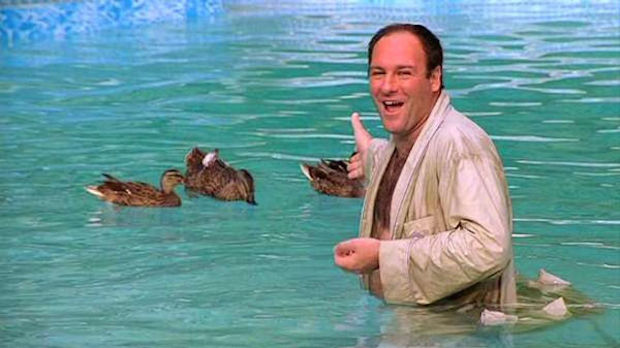