The mystery of the Brooklyn Nets’ website has finally been solved.

Jane Hill, a 69-year-old Santa Fe resident, has revealed that she and her son John were the masterminds behind Nets.com, a domain name that has no connection to the basketball team. The Hills offered to sell the domain name to the Nets for $5 million, but the team refused the offer.

“Our website is BrooklynNets.com, and our fans know this is our site,” Nets spokesman Barry Baum told the New York Times. “Brooklyn Nets is our brand, and we have no interest in Nets.com, despite the shameful efforts of the registrant to attempt to sell us this domain name for seven figures.”

The dastardly duo tried all manner of tricks to keep up the charade over the past two years, including redirecting to web pages for Dallas Mavericks owner Mark Cuban and former Net coach Jason Kidd, along with an All-Star ballot for the New York Knicks.

Ms. Hill knows her stuff. In the late 1980s, she owned a business called Roadrunner Computer Solutions, but sold the domain name Roadrunner.com to Time Warner for seven figures at the height of the dot-com boom. She is currently the owner of Cyber Mesa Telecom, a small telephone and Internet provider in the Santa Fe area.

Her first Nets.com prank got plenty of attention–it featured a photo of Mark Cuban, along with the banner “Looking for the New Jersey Nets? Looking for the Brooklyn Nets? They’re not here … but they SHOULD be!” Below this was a message written in Russian that translated to ““Mikhail, are you watching? Vilena wants to know,” in reference to Nets owner Mikhail Prokhorov.

Mr. Hill, a sports junkie and tech whiz, enthusiastically joined his mother in the con.

“The one compliment I take to heart is when people say, ‘This is the ultimate troll,’ ” Mr. Hill told the Times. “There’s some joy in that.”

The Nets.com domain name is now on eBay for anyone who wants it, with the current highest bid at $125,000.

This is not the only domain name stunt in the news recently–to stick it to Michael Bloomberg’s .nyc campaign, John Oliver spotlighted some of the most ridiculous entries, like this one, on his show Sunday night. 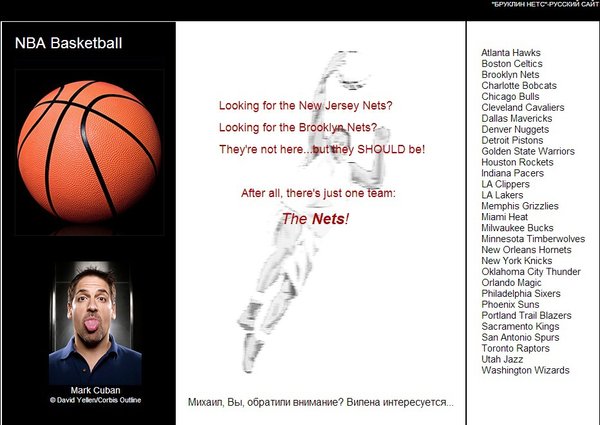