A little hope goes a long way. That talisman to live by has been the theme of countless movies about courage in the face of adversity, but the message has never been advanced more movingly or brilliantly than in The Theory of Everything. This is the extraordinary biopic about the fascinating, complex and inspirational example set by genius cosmologist and physicist Stephen Hawking, who changed the future of the world from the paralyzing prison of a wheelchair. As the mathematical wunderkind who advanced a scientific theory beyond anyone’s imagination, the great young actor Eddie Redmayne (My Week With Marilyn, Les Miserables), gives the most electrifying performance of the year.

In 1963, Stephen was an awkward, shy and charmingly self-effacing 21-year-old student with an awesome brain but no social skills, working on a Ph.D. in quantum physics at Cambridge, when he met a pretty, aggressive and determined fellow student, Jane Wilde, at a party and fell madly in love. One of the few girls who could engage his intellect in lively discussions of religion, poetry and science, she intrigued and captivated him completely. Then, as the relationship gained intensity, he was dealt a cruel blow. A small stumble led to tremors and a collapse on the pavement that shattered his glasses. With his entire future ahead of him, Stephen was diagnosed with the progressive motor-neuron disorder A.L.S. (a.k.a. Lou Gehrig’s Disease) and given a mere two years to live. Plummeting in a downward spiral of depression, he cut off his friends, loved ones and academic connections, resigned to hopelessness and death.

But Jane (played with a combination of tough grit and English rose garden sweetness by Felicity Jones) was having nothing to do with despair. She pursued him, married him, devoted her life to his survival and provided him with the wind beneath his broken wings. The marriage produced three children, lasted 25 years and inspired Jane Wilde Hawking’s best-selling memoir Travelling to Infinity: My Life with Stephen, upon which director James Marsh has based this film, with a beautifully researched warts-and-all screenplay by Anthony McCarten that manages to let you in on the public heroism and private pain of a great scientist while making his theories user-friendly for any audience to understand and enjoy.

Thankfully, the theory of time and the origins of the universe are not the only accessible elements here. This is not a typical Hollywood love story about perfect people engaged in acts of perfect heroism. As Stephen’s crippling disability accelerates, the marriage is marred by periods of doubt, exhaustion and infidelity on both sides—Jane with her children’s male nanny, the family’s kindly choir director and her husband’s devoted caregiver (Charlie Cox), Stephen with a speech therapist (Maxine Peake). But even after the divorce and Stephen’s second marriage, they remain friends to this day.

This is a great film in every sense. Superb direction frames every shot with perfect lighting and informed movement. The literate screenplay never makes a wrong move. The cast is uniformly excellent and craftsman-like, and even though Mr. Redmayne’s impeccable performance might effect a tear or two, he also finds humor in the role. You will laugh and cry at the same time when he plays Stephen descending the stairs on his butt, determined to get to the bottom, one step at a time, or bends his spoon so he can feed himself. Twisted like a pretzel and communicating with distorted challenges to his mouth, lips and tongue, his head cocked and hanging like a rag doll with a broken neck, shoulders hunched, fingers curled like twigs and feet pointed inward, one can only imagine the physical damage to Mr. Redmayne’s anatomy. But it’s amazing how he brings you into Stephen’s world, until you feel he’s an old friend. He defied the odds, proved the existence of black holes in time and space, and became something of a human miracle. Now at 72, with no plan to retire, Stephen Hawking is still a living symbol of how much the brain can achieve when the body gives up—and Eddie Redmayne needs a chiropractor. When awards season rolls around, he may also need someone to carry his Oscar. 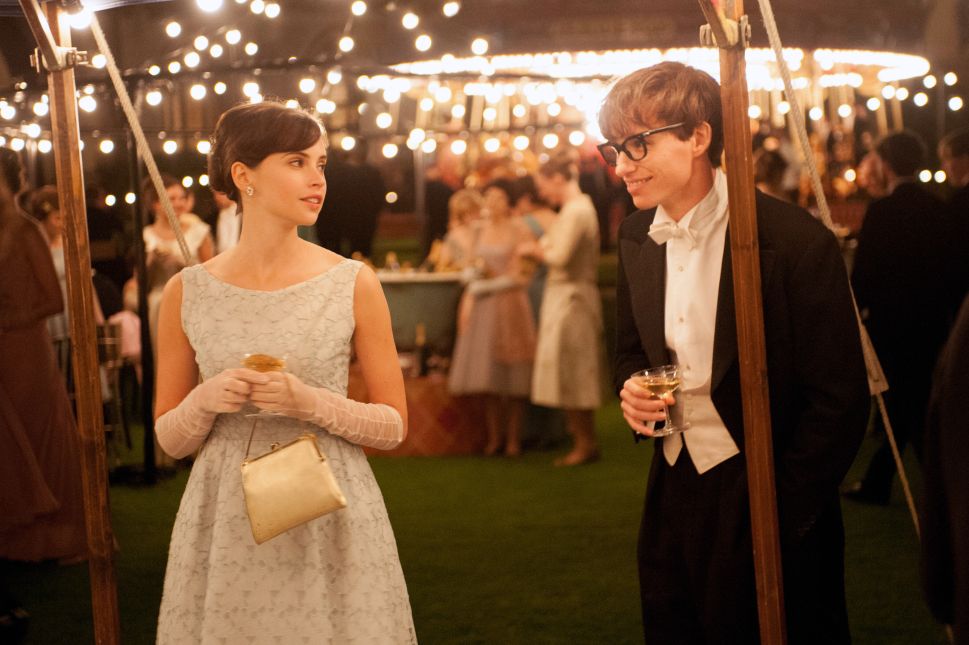 Filed Under: Movies, Movies, Reviews, Eddie Redmayne, Stephen Hawking, the theory of everything