Tonight, the Anthology Film Archives will screen Moon Dust, the first full-length film by Detroit-based artist Scott Reeder. It’s a science fiction romp that follows employees of a seen-better-days moon resort, and the lo-fi but painstakingly rendered color-saturated vision of outer space should earn the movie at least a cult following, if not further accolades. We met with Mr. Reeder on Saturday afternoon for a beer at 169 Bar, on the Lower East Side, to talk about the way the Day-Glo look of the film came together over the course of a decade, if not to give away too much of its contents. Given the kitschy vibe at 169 and the corny old spy movies playing on mute on a TV, it seemed like a nice place for a conversation about Moon Dust.

You began working on this, like, 11 years ago, right?

Something like that, in like 2004. Maybe I was working on the script a little bit in 2003 but a lot of the original script wasn’t really used. It sort of morphed into this other thing.

What was the original conception of it?

It was supposed to be more like one room. But I always wanted it to be a little bit bigger and have other locations. That’s what made it take so long. I kept adding to it over the years. So what started off as being kind of a strength—the decision to make this theatrical reality that’s a little bit cartoony, theatrical, not quite real, just some dry wall—it actually made it more difficult. Once you sort of establish that this is the reality, you couldn’t just go film on the street or at 7-11 or something. So everything had to be built from scratch so that part was it just even though it’s super low budget.

Early this year, you showed some of the set as part of an exhibition at 356 Mission in Los Angeles. What it always your intention to show elements of the film as standalone pieces?

There was always a strong relationship between my studio practice and the look of the film. I was sort of interested in that monochrome. So the color thing was always part of it. In LA, the idea was just presenting the sets as their own things. I actually made a series of paintings in LA that sort of directly came out of the movie: there would be these funny moments where an intern would be painting the wall of the set sort of half assed and there would be like four different weird colors and it would look like a Rothko for second, so that was kind of really an unexpected interesting byproduct of doing the two things simultaneously.

So, it was your first time making a film, and it took over a decade. What happened?

It took so long to create the first set that, I don’t know what it was, but people got bored. The main actors spent maybe 4 or 5 weeks making the set, and the two of the main actors just moved. And I was kind of, like, pissed because it was like for no reason. They didn’t have jobs, they both had month-to-month leases. So that was a setback.

And when you have volunteer actors, it’s not like you can be like “Be there at 7 a.m.” It’s more like, “Oh, you’ve got to work tonight, shit, let’s do it tomorrow night.” The whole movie, the spirit of it is, if someone was cast and they couldn’t show up but their brother could, then I’d put him in there, it wouldn’t make a huge difference.

But you’re actually done now? Like, you’re satisfied with it?

The only thing is there’s so much good stuff, there are so many good scenes that didn’t make the cut. But unless I wanted to make it like “Roots,” I had to lose them. I do have this idea: “B Side of the Moon.” It would be like this DVD extra with deleted scenes, but instead of deleted scenes, it would be just a whole other movie. There’s 80 hours of footage, but now I really know where everything is, it’s really fresh in my mind.

In terms of tone, approach, what were you looking toward emulating, are there any films or art that informs Moon Dust directly?

I like early silent films like Metropolis, things that are really handmade. I really like the Cocteau Beauty and the Beast where everything is really reduced. Even bad TV like early Twilight Zone or Outer Limits when you go to a different planet and people have welding goggles on and that just indicates they are Martians or something. There’s something about that low-tech future kind of thing I was really inspired by.

You screened a nearly complete version in LA earlier this year. Did it go over well?

It was really good. Everybody laughed, which to me is good. A spoiler, but, when my character died, people cheered. So I don’t know, that was kind of weird, but it got a response. There must have been some kind of emotional thing going on. I think people were surprised that it was sort of watchable—I was surprised too. It’s a little bit artsy for a normal movie but it’s more like a movie than most art. It’s somewhere in the middle there. It doesn’t have a clear protagonist. It’s more like, maybe, Robert Altman. I mean I’m not saying it’s as good as Nashville.

And so what’s up next for you after Moon Dust settles.

I’m doing this show with this artist Andrew Kuo in January in New York. Because Andrew and I both like language and he DJs so I think it would be kind of cool to make a spoken word dance single or something.

Yeah it’s crazy. It’s like all cats—well, it’s not all cats, probably 60 percent, but they are the highest quality cats. They are the best cats. 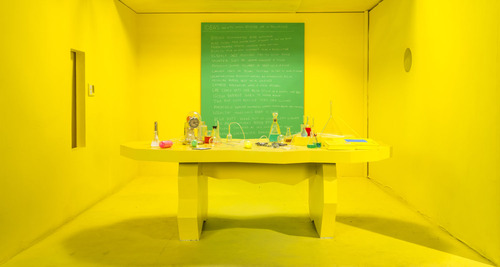