At a busy repertory company like the Metropolitan Opera there are inevitably interesting nights and not-so-interesting nights, but it’s difficult to recall a performance of such stultifying dullness as last Thursday’s performance of Aida. Undercasting and ragged ensemble utterly blunted the impact of Verdi’s classic score. This was the kind of night that proves the haters right: sometimes opera is boring.

Most disappointing was the listless performance of Liudmyla Monastyrska in the title role. The part of an Ethiopian princess who has fallen in love with the leader of the enemy Egyptian army served for this artist’s successful Met debut two seasons ago. At that time, her glamorous, silvery spinto soprano suggested she might be the next great Verdi diva, but those hopes looked dubious as of last Thursday.

Ms. Monastyrska’s voice sounded cloudy and her phrasing choppy and short-breathed. The tone was impressively penetrating on the rare occasions when she approached high notes in a full-throated fortissimo, but she mostly seemed unwilling to unleash the voice, crooning whole scenes in a timid mezzo-piano. She performed the yearning “Nile Aria” in a ghastly falsetto, rushing the tempo and barely pecking at the climactic high C.

What’s worse, her onstage presence looked distracted and distant, as if she were hardly aware of her surroundings. Even back in 2012, the soprano’s acting was rudimentary, but this time she seemed to be sleepwalking, staring glassily into the middle distance and scarcely acknowledging her colleagues. Mezzo Olga Borodina, who sang the role of the jealous princess Amneris, tried once or twice to make eye contact with Ms. Monastyrska in their second-act confrontation scene, but eventually gave up and retreated to the side of the stage to belt out her lines, concert style.

Ms. Borodina, who’s been performing this part at the Met since 1998, is developing a little tarnish on her golden tone, and the size of the voice, never huge, has contracted a bit.  She still commands a handsome legato, but her upper register now is secure only up to about G. In her last act “judgment scene,” she cut off the final high A almost immediately. “Esce disperata” reads the libretto’s stage direction at that point, “she exits frenziedly,” and Ms. Borodina followed that instruction to the letter, lurching across the vast Met stage and back again, arms flailing and eyes rolling. True, the moment was camp, but it provided one of the evening’s few moments of entertainment value.

It was hard to imagine these two princesses could be quarreling over so lackluster a lover as Marcello Giordani’s Radames. The veteran tenor was in middling voice, tremulous and flat in middle register, though reliably brilliant up around high B flat. Like Ms. Monastyrska, though, he plodded through the score, just getting out the notes any old way. Tall and handsome in the production’s gaudy, gilded leather tunics, he slouched and scowled regardless of dramatic context.

Baritone Zeljko Lucic, so fiery just a few weeks ago in Macbeth, sounded solid but muted as Aida’s treacherous father, Amonasro, and bass Dmitry Belosselskiy made mighty noises as the haughty high priest Ramfis. The best singing of the night was in the smallest roles: soprano Lori Guilbeau, haunting in the Priestess’s brief offstage solos, and bass Soloman Howard, assertive in the King of Egypt’s first-act battle hymn.

Conductor Marco Armiliato, usually reliably routine, here was in over his head. It sounded like he and the orchestra had never met before, with scratchy string tone and sloppy ensemble. Sonja Frisell’s 1988 production now looks risibly dated, the sets and costumes suggesting an Egyptian-themed masquerade ball scene on Dynasty.  As staged by Stephen Pickover, the parade in the Triumphal Scene had about as much electricity as the queue for license renewals at the DMV.  The tragic opera turned farcical in the first act when the “stone” wall of the King’s palace flapped in the breeze like a sheet on a clothesline.

Coincidentally, the production of The Magic Flute currently playing at the New Victory Theater on 42nd Street started with the hoisting of an actual bed sheet. It’s used as a projection screen for real-time video of the show’s conductor, Mandisi Dyantyis, who dances his way through the opera’s overture, cleverly arranged for onstage marimbas and choral voices. It’s just one of dozens of witty touches in the Isango Ensemble’s two-hour reimagining of Mozart’s opera.

Director Mark Dornford-May has adapted the fairy tale libretto into a South African folk tale, with conversational lyrics and dialogue in a mélange of languages, including Xhosa. Though the text, sung unamplified by the classically trained cast, was not always easy to make out, exuberant performances put the story over with wit and emotional clarity.

The headliner of this performance was the company’s co-founder, Pauline Malefane, who sang the mysterious Queen of the Night’s elaborate arias with poised bravura. Even more impressive was Zolina Ngejane as the Queen’s daughter, Pamina, who sang with a complex, richly-colored soprano. A breath of fresh air after the mugging and barking you usually get in the role of Papageno, Zamile Gantana played the comic bird-catcher with subtle timing and a pleasant pop baritone.

The production design takes materials that might be readily available in a South African township—corrugated metal sheets, scaffolding, oil drums—and arranges them into sophisticated and varied visuals. Jets of flame shooting through a trap door indicated the menacing dragon in the first scene, and the Queen looked suitably regal in a crinoline dotted with individual bird plumes.

Even with all this show’s singing and dancing—some of Mozart’s solo arias explode into vigorous production numbers—it never felt trivial or childish. The libretto’s original story, about a rite of passage into responsible adulthood, is treated seriously, even a bit gravely. As such, the show might be frightening for pre-schoolers, but the older kids in the audience last Saturday night, 8-year-olds up to tweens, seemed to be having a tremendous time.  For that matter, so did the adults—even cranky opera mavens still smarting from the Met’s lumpish Aida. 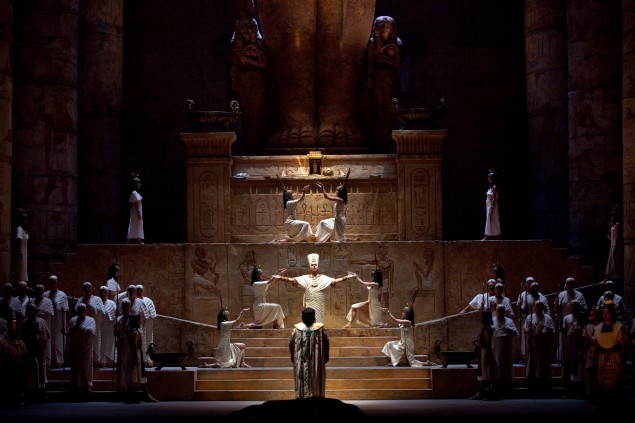