In the first months of 1960, my grandfather managed to get out of Cuba thanks to some connections to Fidel Castro, an old prep school buddy of his, and left on a jet also carrying the senator from Massachusetts, John F. Kennedy. My grandfather’s kids—including my mother, who was 3—made such a scene that he sent the senator a letter apologizing. Kennedy responded, assured him the kids were fine, and soon after, my grandfather and his family settled in a house in Greenwich, Conn.

Or at least that’s the yarn I’ve been told. I’ve been inclined in recent years to treat such an origin story as apocryphal—even if the facts and dates add up, some details change slightly between tellings, exposing the cracks. Every family has these little legends.

Yet I can’t help but recall the tale two times each year, when the car zips by the old place in Greenwich—the house was sold a few years back—on the way to the biannual exhibitions at the Brant Foundation. Last Sunday saw the opening of “Deliverance,” a staggeringly blue-chip show of Larry Clark, Christopher Wool, Richard Prince and Cady Noland, focused on work made between 1970 and 1997—when America dealt with the lingering consequences of Kennedy’s death: the culture wars, the military intervention, the explosion of media.

It’s been five years since the billionaire Peter Brant—paper magnate, mega-collector, magazine baron—began showing works from his collection in a converted barn across the street from his house and the giant Jeff Koons Puppy that guards it. (It’s the only other edition of Puppy apart from the original, which stands outside the Guggenheim Bilbao, and it costs Mr. Brant $100,000 a year to maintain.) Since then, the art world has gotten used to trips out to the elysium of bottomless bubbly and pristine polo fields. Yes, polo—Mr. Brant founded the Greenwich Polo Club, as he’s one of the country’s great amateur players, which makes him basically Tom Buchanan come to life, if you replace the taste for violence with an acumen for collecting contemporary art.

These are not your usual openings. They start at noon on a Sunday and go until dinner time, with enormous platters of food being refreshed by an endless stream of servants coming in and out of a fully outfitted white tent—wait, perhaps Mr. Brant actually is Gatsby?

There’s always some sort of spectacle, whether it’s Nate Lowman bringing along a particularly famous car that’s been sold over and over—O.J. Simpson’s white Ford Bronco—or Benicio del Toro with Christopher Walken on one side of the tent and Leonardo DiCaprio on the other, or Owen Wilson palling around with legendary dealer Tony Shafrazi, or Larry Gagosian completely ignoring a pack of reporters on a blanket when choosing the perfect spot to take a nap.

So, I hopped on the train to Greenwich, flagged the car, and rode into the woods—passing mansions, passing patches of untouched green, passing the church I used to go to with my grandparents on Sundays—until arriving at the land of polo and Puppy.

“This is Kids, by Larry Clark,” Mr. Brant said as I walked in. He was pointing at the screen, where soft-faced kids slugged beers amid dope haze in a cramped apartment. I went upstairs, where Richard Prince’s Spiritual America—a reappropriation of a picture of a nude 10-year-old Brooke Shields that the police forcibly removed from the Tate Modern due to obscenity—was installed above a fireplace, the hearth of the house. A Cady Noland sculpture further disrupted the domesticity by flinging beer cans and beer boxes and other detritus all around. Images from Larry Clark’s Tulsa show a gritty side of a sorry city, all poor kids driving beat-up cars. And to our eyes all of this seemed quite at odds with the gorgeous Greenwich landscape, the houses the size of small planets, the billionaire collectors this way and that. But perhaps the incongruity helps—perhaps it’s part of the show to have the kids eating Wool-based cookies that proclaim “RIOT” as they frolic in a world of utter serenity. As the Wool piece Fuckem declares, “FUCK EM IF THEY CAN’T TAKE A JOKE.”

Speaking of Mr. Wool, he arrived a little after 1:00 p.m., and quickly convened a meeting with Mr. Prince and Mr. Clark to take a walk through and admire each other’s work. It goes without saying that Ms. Noland would not be there: she has not made a public appearance in 20 years. Attempting to stage an exhibition of her work can be a big no-no—when Larry Gagosian threatened to, she said she would shoot him—but Mr. Brant owns the works, so he can show them. Ms. Noland did request a disclaimer, though: “The artist, or C.N., hasn’t given her approval or blessing to this show.”

And I did hear a bit of gossip: When an interior designer asked Mr. Prince where Ms. Noland was, he responded, “Up my ass!”

Mr. Prince had nothing to say to me, and neither did Mr. Clark, though at least Mr. Wool clarified his desire to keep his mouth shut.

(“DONT TALK TO THE PRESS”—I think that would look pretty good in black letters on a white canvas.)

And then there was Mr. Brant, standing in the barn that is his domain, across from his house, surrounded by violent, abrasive art in a three-piece suit, pink handkerchief in pocket.

“I think they’re four artists who have a commentary of the times, and they really reflect that time,” he told me.

As he said that, I looked over to see Ms. Noland’s Bluewald—which is the image of Lee Harvey Oswald printed on aluminum and punctured with holes, an American flag in his mouth—segue into Mr. Wool’s Apocalypse Now—which reads “SELL THE HOUSE SELL THE CAR SELL THE KIDS.” Kennedy’s death segued into the Vietnam War, just like Kennedy’s life segued into my grandfather moving into the house in Greenwich.

“Showing them together, you see that,” Mr. Brant continued. “I’m not saying it’s a movement, but they are four very important American artists.” 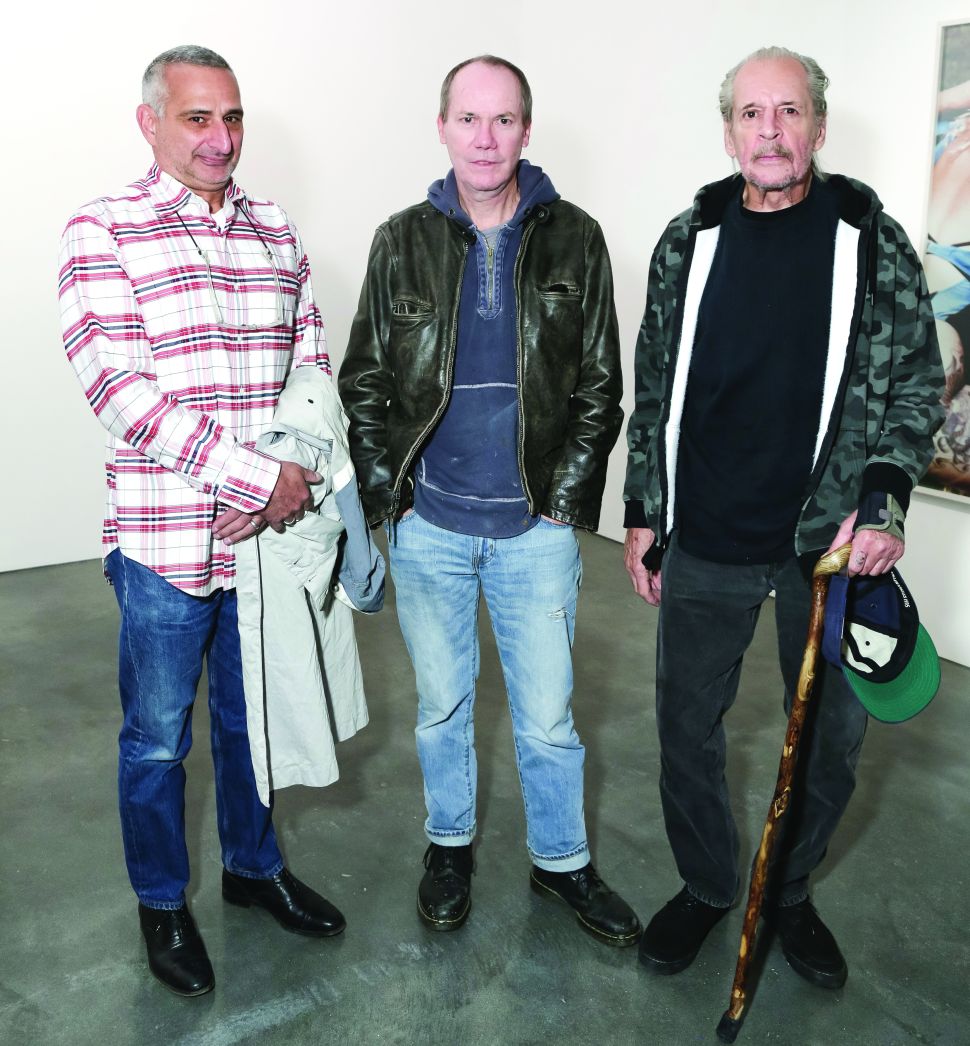