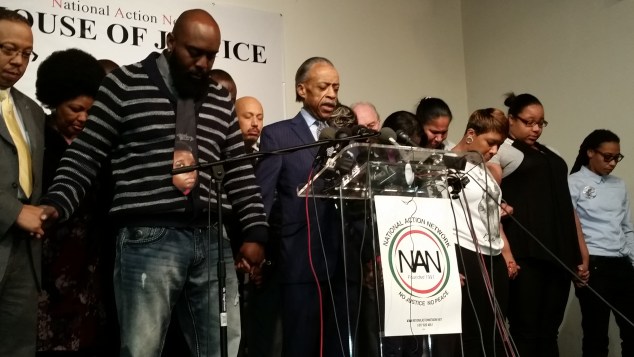 Two days after a Missouri grand jury decided not to indict a white police officer in the killing of a black teen, Rev. Al Sharpton said today he is not worried about more unrest if there is no indictment in the case of Eric Garner–and chastised the media for focusing too much on the furious reaction to the grand jury’s ruling.

“No, what I’m afraid of is that there will not be indictments of officers for killing unarmed people–that’s what I’m afraid of,” Mr. Sharpton said in a response to an Observer question about whether he feared that New York would see the kind of violence that overtook Ferguson, Mo. if no police are indicted for Garner’s death.

This afternoon at his National Action Network Headquarters in Harlem, Mr. Sharpton gathered the families of three recent victims of police-related violence: Lesley McSpadden and Michael Brown, the parents of Ferguson teen Michael Brown; Esaw Garner and Gwen Garner, the wife and mother of Eric Garner, a Staten Island man who died in police custody this summer; and Kimberly Michelle Ballinger, the domestic partner of Akai Gurley, the Brooklyn man a police officer shot and killed last week.

Mr. Sharpton led the families in prayer and ushered them off stage, taking questions afterward with the attorney for the Brown family, Benjamin Crump. “This is a very painful time for these families,” Mr. Sharpton said. “I hope America will understand, whatever your opinion on the case is, whatever your views of the procedures, that these are real human beings.”

Though Mayor Bill de Blasio, a close Sharpton ally, urged New Yorkers not to “connect the dots” between the cases, Mr. Sharpton–and thousands across the city–appear to be doing just that. Violent protests rocked Ferguson on Monday after the grand jury decision was announced and large, relatively peaceful protests broke out in New York City at the same time, channeling the rage felt by some New Yorkers toward a police department that, in their view, mistreats minority communities.

More protests may come if Staten Island District Attorney Daniel Donovan decides not to bring charges in the case of Garner, who police placed in a chokehold after he resisted arrest. Garner was illegally selling cigarettes in July and, unlike Brown, his confrontation with the police was caught on video. Mr. Sharpton led two large marches in Staten Island this summer and a grand jury is expected to reach a decision on the Garner case next month.

Mr. Sharpton has not spoke much recently about Mr. Donovan, a Republican, who he has previously called for the federal government to replace with a special prosecutor. Today, Mr. Sharpton once more had harsh words for the Ferguson grand jury decision and St. Louis Prosecutor Robert McCullough.

“The process should be indicted,” Mr. Sharpton said. “How did we know what Michael Brown’s side of the story is?” 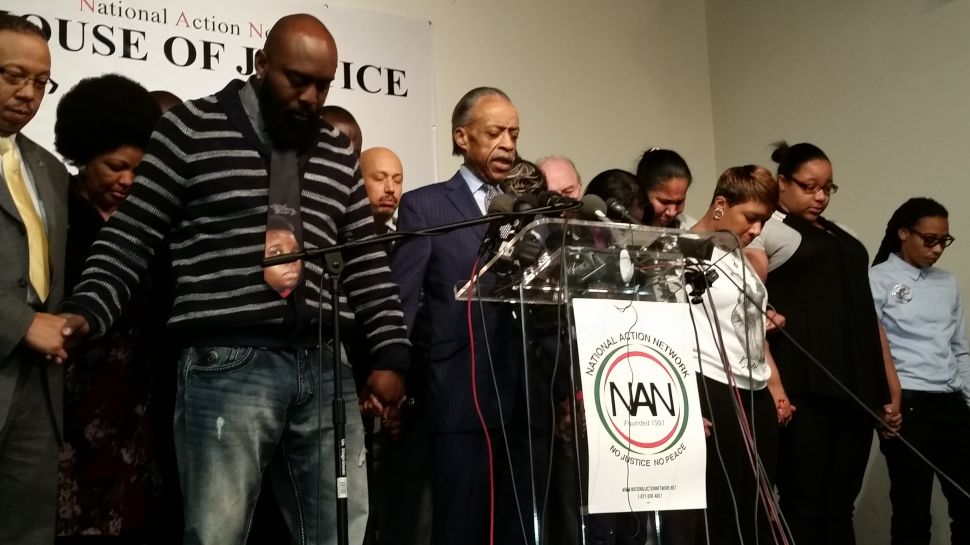