After a grand jury in Ferguson, Missouri declined to indict a police officer in the shooting death of an unarmed black man, Rev. Al Sharpton said New Yorkers would face the same “attitudes” in investigations in police-related deaths here.

“We are dealing with the same attitudes of Ferguson right here in the city,” Mr. Sharpton said.

A Missouri grand jury declined to bring any charges against police officer Darren Wilson in the death of Michael Brown, an unarmed black teenager whom Mr. Wilson shot to death. Mr. Sharpton watched a prosecutor’s announcement from his National Action Network “House of Justice,” alongside the family of Eric Garner — a Staten Island man who died in July as police tried to arrest him for selling loose cigarettes.

Mayor Bill de Blasio recently urged New Yorkers not to “connect all the dots” between Garner’s death, Brown’s death, and more recently, the death of Akai Gurley, who police say was accidentally shot and killed by a rookie cop in a housing project stairwell last week.

But Mr. Sharpton is among several voices in New York making that connection.

“This is one case, you have another case now with Gurley,” Mr. Sharpton said tonight. “Ferguson is not just in Missouri, which is why we watched it tonight in the House of Justice. We can lose a round, but the fight is not over.”

Brooklyn District Attorney Kenneth Thompson is investigating Gurley’s death. But the inquiry into Garner’s death — which came before Brown’s death in Ferguson — is considerably further along. A special grand jury impaneled by Staten Island District Attorney Daniel Donovan is considering the case and will be tasked with deciding whether to bring charges against the officers involved — including Daniel Pantaelo, the officer shown on video wrapping his arm around Garner’s neck to bring him to the ground. Some, including Police Commissioner Bill Bratton, have said the move appeared to be a chokehold, which is not illegal but is prohibited by NYPD guidelines.

Garner’s family — his wife and mother joined Mr. Sharpton — did not make any remarks. But Mr. Sharpton said the lack of an indictment in Ferguson was a blow to them.

“It as expected, but still an absolute blow to those of us that wanted to see a fair and open trial. I think that it is clear that even when you see a blow coming, that you expected, it still hurts,” Mr. Sharpton said. “Nonetheless, we said from the beginning that we had little or no confidence in this local prosecutor and called for federal intervention.”

Mr. Sharpton criticized the remarks of St. Louis County Prosecuting Attorney Bob McCulloch and the grand jury investigation he oversaw. He also noted that Garner’s family had stood alongside Brown’s in September — calling for the federal Department of Justice to take over both cases from local law enforcement.

“They collectively share the pain of having a loved one taken by law enforcement,” Mr. Sharpton said of the Garner and Brown families, again connecting the different cases. “Let me say, that is also now joined by other families, including the Gurley family, that now has joined that rank of those seeking justice in a death caused by law enforcement.”

Earlier this evening, Mr. Bratton again said he thought the three deaths were “very different” circumstances. He also told reporters he expected demonstrations, but no violence, in New York City.

“We’re not anticipating violent protests at all,” he said, adding the police department’s goal would be to allow for peaceful demonstrations.

Mr. Sharpton wasn’t alone in drawing parallels between the situation in Ferguson and events in New York. In a statement, Public Advocate Letitia James also compared the deaths of Gurley and Brown in a statement noting she was “shocked and saddened” by the Brown case.

“Whether it’s the shooting of Michael Brown in Ferguson, Akai Gurley here in New York City, or the many other unarmed victims who have lost their lives after encountering those who are supposed to protect them, enough is enough,” Ms. James said. “I pray for Michael, Akai, and all others who have left us too soon. What we need now is reform and action, not violence or vengeance.”

Others reacted to the Ferguson verdict itself via social media. On Twitter, City Council Speaker Melissa Mark-Viverito said the lack of an indictment and the prosecutor’s remarks left her feeling “disgusted.” 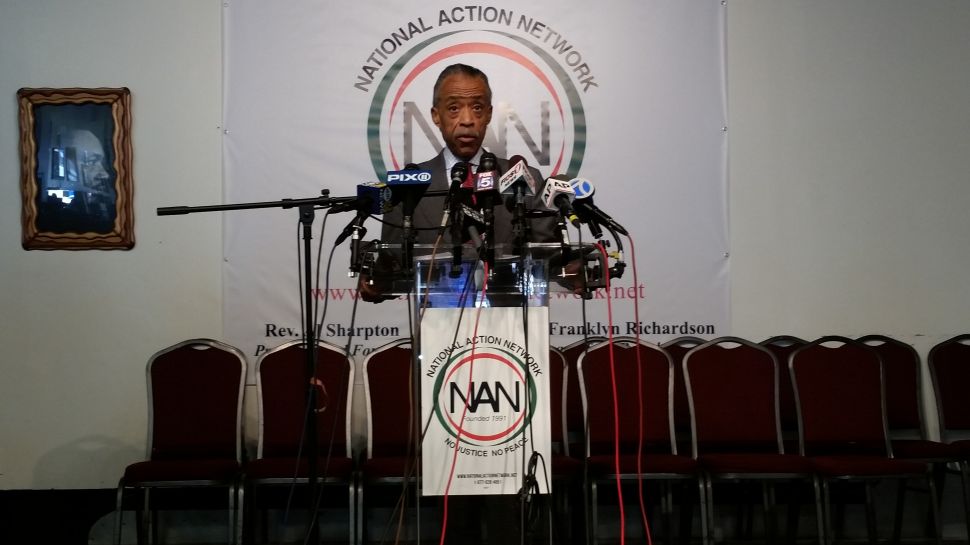