Here’s a pro-tip for anyone in the performance biz: if you think your former dominatrix-cum-sideshow ringleader has nefariously “disappeared” two of her employees, try not to openly antagonize her on her birthday. And if you do, maybe don’t volunteer to have her throw sharp objects at your groin? Sorry, Paul the Illustrated Seal, but this one is on you. It’s called a “gut check” for a reason.

Come to think of it, all the “freaks” in this week’s episode were acting a little off. Everyone is so suspicious of Elsa that they…throw her a birthday party? Also, since when did anyone in that troupe really care that much about Dot and Bette, the missing Siamese twins of cynicism and borderline mental retardation? (No, that’s not me being flip. There are several indications that Bette is not functioning at the highest mental capacity. Like the fact that she murdered her mom for not letting her go to the movies.) Jimmy gives a shit, maybe, but then again Jimmy still gets choked up talking about Meep. I don’t see Paul, busy negotiating his love triangle with Elsa and Meryl Streep’s daughter, having that much time or inclination to play detective. And maybe if everyone is so worried about the performers disappearing, someone should be keeping a better watch on Ma Petite? Maybe it’s all those Stanley/Maggie fake-outs over the past two weeks, but I’m getting a little tired of watching these characters get fantasy murdered. Come on, American Horror Story, stop sticking our hand into a bowl of grapes and calling it eyeballs.

I miss Twisty. Is that weird?

Okay, so half the episode was devoted to the Motts, which is always a pleasure. Especially Gloria’s immediate bristling when Dandy starts showing his new girls more attention than mommy dearest. Maybe she planned on having them be sacrificed to her darling boy’s budding murder hobby? (Which, it’s again noted this week, is a way more acceptable profession for the scions of Old Money than acting.) But while Bette might actually be mooney-eyed for her handsome young psychopath, Dot is as cranky as ever, writing in her Laura Palmer secret diary that she’s only enduring the free caviar and 1 percent-er lifestyle so she can afford the surgery to separate her from her doofy twin forever. Then she can go be with Jimmy, just like she was meant to! (Does anyone else find it creepy that Dot’s fantasies about surgical separation always end with Bette not making it? Maybe Dandy and Dot are the match made in heaven.) We’re starting to see that for all Bette’s goofiness, Dot’s got some real issues of her own: when Dandy claims that it was he, not Jimmy, who killed Twisty and saved the town, she calls his bluff, causing him to fly into one of his Baby Tantrum Rages. “What’s wrong with you?” Bette asks Dot with her twin telepathy. Yeah, really?

You’re locked in a room with a man-child who just gave one of the creepiest desert metaphors since Mickey Knox, and you’re trying to argue about his kill rate? Maybe let him have this one, Dot.

But no, the “mean twin” won’t let it go, and what’s worse, she refuses to tell Dandy a secret about herself in return. But she also doesn’t do a good job hiding her notebook full of secrets, which Gloria and Dandy are predictably unhappy with. Well, she IS kind of an ingrate. Dot is a lot like me in high school. “I didn’t ask for your fancy food GOD I can’t wait to get out of here where people will stop waiting on me hand and foot and attending to my every whim!”

If I’m not talking that much about the visuals in this week episode, it’s because they didn’t impress me all that much. Sure, that giant spinny wheel was cool, but it didn’t really tap into my deep-seated fear of circles. At the rate Elsa’s going, I predict that she loses the rest of her performers by the end of next week, and the audience won’t be far behind. Oh well: I’m still holding out for Neil Patrick Harris’s mid-season cameo to spice up this storyline. 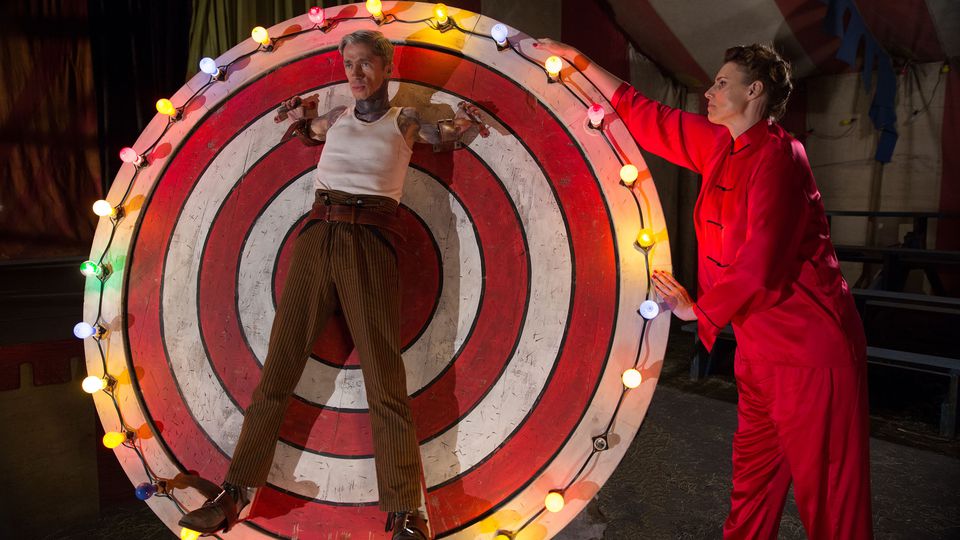