American Horror Story finally lived up to all of our fantasies last night when it finally gave Evan Peters something to do besides mope around with his lobster hands. (True Story: have you all JUST noticed that his “claws” are just two fingers fused together, which, even with 1950s surgery being what it is, should have been easily fixable?) That’s right: only three seasons too late, and we’re getting Tate as Kurt Cobain!

Aw, I’ve really been missing the anachronistic singing on this show.

In other news, Jimmy has gone to pick up the world’s least likable conjoined twins from where they’re being held captive treated pretty awesomely at the crazy Mott compound. While Dandy professes his love to Bette, she parrots back his claim to Jimmy that it was actually he, Dandy, not Jimmy, that saved the town from the evil clown. Which sets the slow-turn mechanism in Jimmy’s brain to grinding… (literally, this is a sound you can basically hear throughout the episode)…maybe this Dandy Mott isn’t just the coddled, insane mama’s boy with a freak fetish that everyone believes him to be! Maybe he’s the coddled, insane mama’s boy with a freak fetish who would definitely put on a funky mask from a rotting clown’s mouth hole and murder people!

Just food for thought. Anyway, the girl’s go back with Jimmy’s to Miss Elsa’s because why not. You’ve got to keep shuffling these characters around or they’ll never get anywhere.

The return of Dot and Bette means a mixed bag for Miss Elsa though. On the one hand, the twins can totally implicate her in their disappearance, seeing as she basically sold them into slavery. On the other hand, they definitely won’t be doing that, because of blackmail purposes. Jimmy’s brain gears grind and grind, but not even hanging out with Maggie the psychic naked from the waist up can help him figure it out.

Speaking of blackmail, Dell is being blackmailed by Stanley into killing one of the freaks so that no one finds out he’s gay. (Uh…who at the freak show is going to care?) God, Stanley is so committed to being part of this one museum’s exhibition. It feels like with his amount of gumption maybe he should try out for another line of work, because he’s putting so much effort into this freak thing and it’s really not panning out well for him. Especially because Dell, the strong man, immediately goes off and tries to tackle Amazon Eve, who doesn’t go down without a fight. In fact, she kicks his ass to the curb with a snarl, “Who’s the strong man now?”

Jimmy has to convince his mother not to murder Dell, which is the carnie code for taking care of problems. Don’t ask me why, but I was just thinking how cool it would be for Jane Fonda’s character on The Newsroom to show up at this point and just issue that speech she gave at the end of last week’s episode about the word “literally” and how she’ll “literally burn down this building with you two inside” rather than sell the company. Don’t you think a “Fonda vs Lange”-off would be exactly what this show needed?

So, going forward, Jimmy tells Dell that he knows that he’s his son, and Dell isn’t able to hit him over the head with a brick. Finally Dell wises up and goes after some easier pickings in the group, mainly Ma Petite, whom he buys a new dress. The better for him to murder her in, my dear. Yes, we’re sad to see Ma Petite go, but finally the death count is getting a little higher on this show.

Of course, the most horrifying part of this week’s episode wasn’t the demise of the world’s smallest carnie, but the creation of a new one. Penny, the hospital worker that fell hard for Paul the Seal Boy, officially tried to leave home and join the circus. Her daddy, being of the cruel and unusual type, decides to send her off with a Bozo the clown haircut, a forked tongue (WTF!) and enough facial tattoos to make her feel right at home in a prison’s white supremacist gang. Poor Penny! Sometimes the diabolical evilness of this show gets to be a little too much, you know? At least with Dell, you can see him wrestling with some of the demons inside of him before he decides to murder. Penny’s father, on the other hand, seems like the definition of old-timey bad guy: unwilling to see why his daughter might love a freak, his response is to turn her into one himself. Poor form, chap! 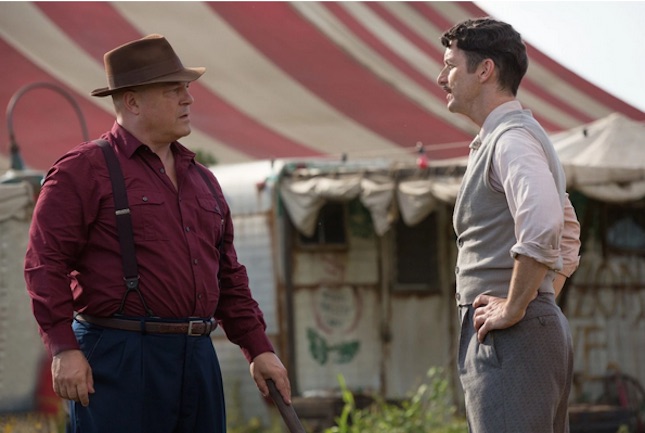