WILLINGBORO – U.S. Senator Cory Booker (D-NJ) bounded into the surprisingly quiet campaign office of Democrat Aimee Belgard, held a quick pep rally with volunteers, and moments later was zooming off to his next destination.

“I’m running around just trying to energize volunteers, we’ve got people up and down the state, walking down streets knocking on doors, making phone calls,” he told reporters later. “So for me it’s trying to be as ever-present as I can.”

It was just one stop on a whirlwind schedule the Democratic poster boy (and U.S. Senate candidate) is blowing through today, beginning with a 6:45 am vote at the polls in Newark, and culminating, back in the Brick City, with a post-election night celebration at his headquarters later this evening. In between, he’ll be joining down-ballot candidates around the state to assist in their own campaign efforts, from Belgard here in Burlington County, to the campaign headquarters of state Sen. Bonnie Watson Coleman (D-15) in the 12th congressional district, to Roy Cho, the Democratic hopeful in North Jersey’s fifth congressional district.

For Booker, today’s election is as much about these other candidates as it is about his own race. Vying for re-election against obscure Republican opponent U.S. Jeff Bell, the Democratic superstar almost decidedly has little to worry about, with polls showing as much as a 15 point lead between him and his opponent. So he’s turned most of his attention to bolstering the chances of fellow Democrats in other parts of the state, particularly the ones running for seats in Congress, where he says the goal is as much about “moving the House back to the center” as it is about increasing the Democrats’ minority.

In Burlington County, that means drumming up support for Belgard, the Democratic candidate in South Jersey’s heated third congressional district race. Out of the handful of candidates Democrats have bet on this cycle, Belgard, along with Roy Cho in CD5, is arguably the party’s best shot at a pickup. Belgard is in a grueling battle with Republican businessman Tom MacArthur to replace outgoing U.S. Rep. Jon Runyan (R-3), and polls over the last several weeks have hinted at a close race between the two.

But in a district that’s leaned Republican from the freeholder level (the freeholder boards in both Ocean and Burlington, the two counties that make up the district, are Republican-controlled) on up to the congressional level (Belgard would only be CD3’s second Democratic representative in almost a century), the contest will most definitely come down to turnout. Belgard has the advantage of her roots in Burlington, where Democrats slightly outnumber Republicans, but is likely to be out-competed by MacArthur in the district’s Ocean half, one of the most conservative in the state.

As such, Booker has spent considerable time here in recent weeks, campaigning for Belgard in field offices and rallying supporters at a Burlington County Democratic rally in Willingboro over the weekend. Democrats here are also trying to put two candidates on the freeholder board, where Tom Pullion and Mike Schmidt face incumbent Bruce Garganio and Mary Ann O’Brien. Some political observers note that because a Booker victory is so certain, Democrats have had to work extra hard to instill the kind of energy needed in voters to turn out big numbers. Others, however, argue that Booker’s name at the top of the ticket is motivation enough to get voters to the polls.

For his part, Booker said he expects turnout in Burlington this year to outshine what the county saw last year, during his special election with former Bogota mayor Steve Lonegan.

“I’m hoping it’s a big turnout. You know, everybody says midterm turnout is low. I faced that last election, with 26 percent turnout. But I’m hoping that we get 40s, 50s today. That would be incredible. I think the energy is encouraging,” Booker said, adding as evidence the activity on his Twitter feed (Booker is a Twitter celeb, with some 1,490,000 followers).

Booker, who after 6 months in Washington is seeking a full-term, has long talked about the gridlock he sees in Congress and has touted himself as a bridge builder in the face of the partisanship. He said Belgard, along with Cho, Watson Coleman, and Brian Hughes, the Democratic candidate in South Jersey second congressional district, could help to move the legislative body back to its political center, especially now that it faces increased majorities in the House and Senate.

“You know, the reality is this is one of those congressional seats we can flip,” Booker said of Belgard’s race. “And right now, I’ve seen so much bipartisan action in the Senate get stopped in the House, from immigration reform, even just something like extending unemployment insurance. So when you see that there can be some bi-partisan effort in the senate but it gets stopped in the House, you know we have to make changes in the House.”

“Sending candidates like Belgard or Hughes or Roy Cho there, we could actually close that gap, that 17 vote gap in the House right now, we can actually shrink that in New Jersey by winning some of these seats,” he added. 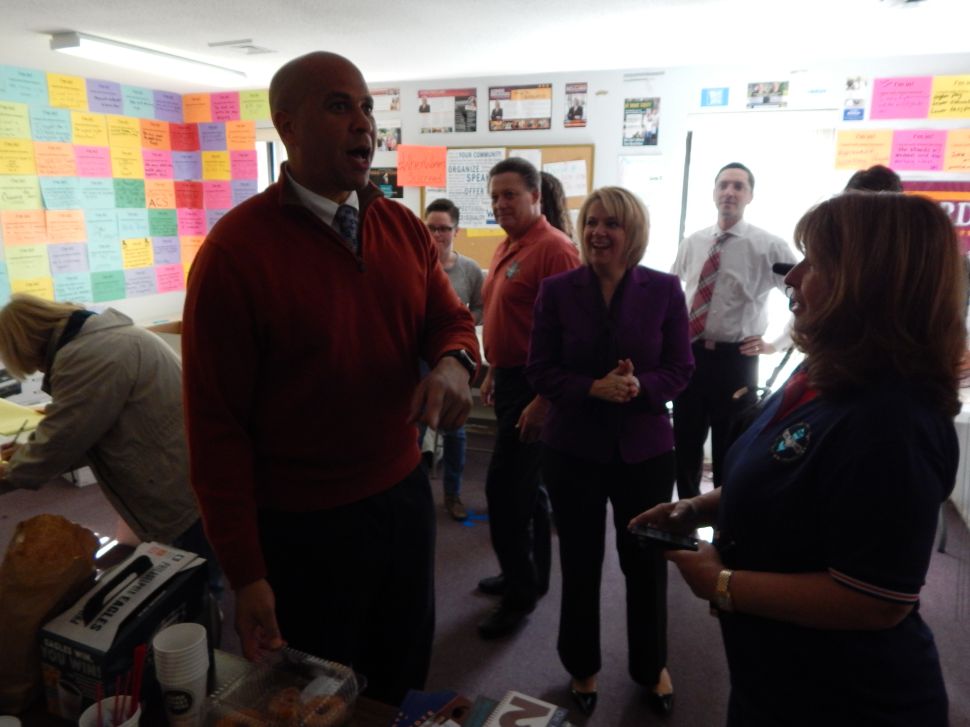