“ICI?” the hefty fellow at the door of Cipriani’s at 25 Broadway asked me.

An automatic reflex, this. ICI had once stood for Imperial Chemicals Industry, a juggernaut, a kind of a Brit Dow Chemical, until it had been picked apart, the last chunk being sold to a Dutch paint conglomerate in 2008. Then my brain kicked in. Within was the top brass of a quite different ICI—Independent Curators International, the non-profit contemporary art center that organizes, among other things, traveling exhibitions—and an event on the calendar of another empire, arguably a more international one than any other current contender: the Empire of Art. I pivoted (the modish word nowadays) and was let through.

Within massed ranks of art worlders, familiar and unfamiliar faces, were seating themselves at long tables which looked toylike in a cavernous space. Slapbang opposite my seat was a giant wall map with such an unusual configuration of the world that I remarked on it to neighbor in a sharp hat. “I’ve never seen a world map that centered on Hawaii before,” he agreed.  He had studied it. “It shows all the old Cunard lines.”

Of course. This was Cunard White Star Building, where a century ago world travelers would buy their tickets to far-off ports of call (Now, it’s an event space). Forget the Imperial Chemicals Industry, Cunard had been the real imperialist deal. The sinking of one Cunard boat, the Lusitania, had brought the US into World War I. According to Winston Churchill, the Queen Mary and the Queen Elisabeth, two others, had shortened World War II by a year. And this Beaux Arts hall was a properly spiffy setting for this event, which was the presentation of the Leo, an award named for the late, enormously missed Leo Castelli, to the Greek entrepreneur and collector, Dimitris Daskalopoulos.

An appetizer was dunked in front of us. Speeches began. And the slightly Fellini-ready nature of this particular event led me to think about just what these events are for, what we were all doing here, just who benefits from the benefits.  Well, number one, it’s a pricey ticket and the ICI, a wholly estimable institution, benefits. There was also an auction of loan pieces, so the artists and gallerists are, yes, soft touches but also benefit from the visibility.

And the rest of us? Well, aside from the Feelgood Factor, you say we benefit from information. This information pulses with reminders. For instance. It would be all too easy to get the notion from the art and financial press—and what an internal melt you see there nowadays—that the art economy mirrors the whole world economy as a 99 to 1 phenomenon, except more vividly. Such events as the ICI dinner, though, suggest that, yes, it’s a layer cake but a very gooey one.

Just in the last ten days I had been at back-to-back auctions. At the Four Seasons, Simon de Pury had auctioneered Birkin Bags metamorphosed by Jeff Koons into Found Art for high six figures apiece. The following evening the Bunny Mellon sale at Sotheby’s had transported us back in time as effortlessly as the swank automobile in Midnight in Paris, which many of those seated in the room—sculpted silver hair, silver chains, presumably attached to fob watches, descending from lapels—would have fitted into just fine. It was a multi-million dollar sale. And in this splendid surround? The woman auctioneer was doing a formidable job coaxing out bids in increments of a thousand dollars and eliciting wildly enthusiastic applause if a lot broke into five figures.

And rightly so, too. You could say that a generous thousand is worth more in human currency that a speculative million.

There’s also this: I knew relatively few people at my long table, and those only slightly. Perfect. The guy in the sharp hat to my left was Mac Premo, one of the artists with work there. Lucky de Bellevue, another artist, was on the other side. Pippa Cohen, who was opposite, has just started a company that manages artists’ careers. Taymour Grahne (these names!) just down the table, started a gallery a year ago. Right now, mostly showing Mid Eastern art. I am far from the first to note that the principal organ in the art world is the ear. Mouths and ears were busy. And that is the electricity that energises this international cat’s cradle of art events in which we’re all entangled. Otherwise, as in so many other fields of human endeavor, we’d all just be sitting home as we send our avatars out online to do our living for us. 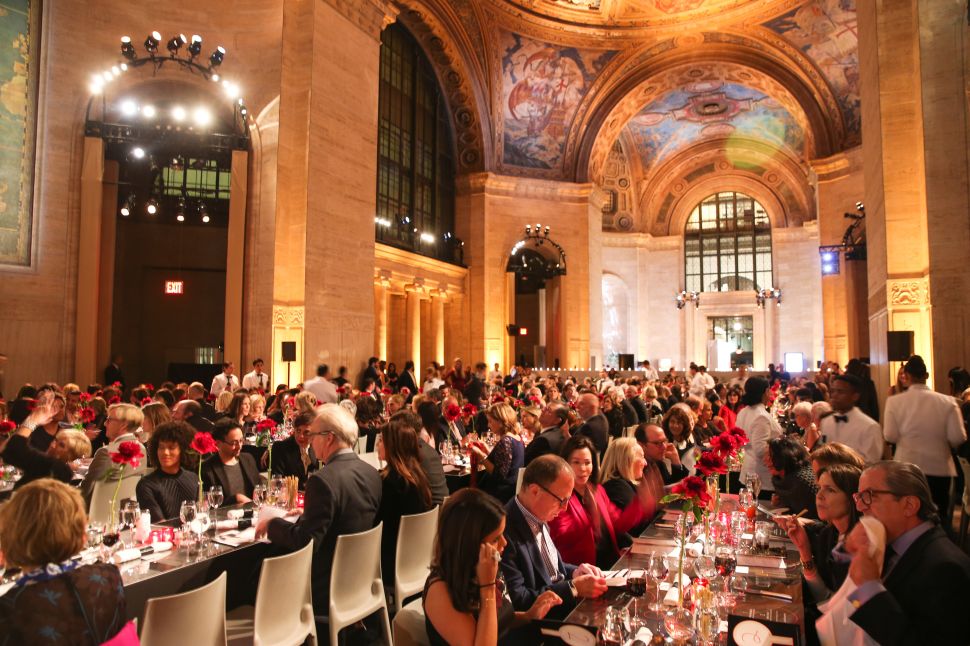