Councilman Antonio Reynoso joined former Assembly candidate Jesus Gonzalez and members of the immigrant advocacy group Make the Road Action Fund to make a last-minute plea to Hispanics to vote along the Working Families Party line–which they argued is the ballot row most reflecting the interests of Latinos.

The Hispanic activists rallied in front of cameras in heavily Spanish-speaking Bushwick, Brooklyn, where Mr. Reynoso–a Dominican-American Democrat–made his case for the labor-backed third party. The pol argued a vote along WFP line would be a vote for raising the minimum wage, creating more affordable housing and passing the Dream Act, which would give public money to pay for the college tuition of undocumented immigrants.

“For four years, we felt like the issues of the Latino community were not being taken into accord and into account. What we have now is the opportunity to show very directly we care about these specific issues, and the way to do that is by making sure people vote on the ‘D’ line,” Mr. Reynoso said, referring to the WFP’s spot on the ballot, and comparing it favorably to that of the Democrats. “If the vote on the ‘A’ Line, business as usual is what we’re going to be supporting.”

Mr. Reynoso argued that Latinos should back Mr. Cuomo on the WFP line despite the tension between the governor and the party and his apparent flouting of the promises he made to them  when he sought their endorsement in June. The councilman posited that votes on the WFP line would show widespread support for core progressive issues.

“If we get on the ‘D’ it shows that there is a request, or a mandate by the Latino community, for the promises, the principles of the Working Families Party, which were laid out when they endorsed him,” he said.

Mr. Gonzalez, a union activist who unsuccessfully ran against now-Councilman Rafael Espinal for Assembly on the WFP line in a 2011 special election, echoed that argument. He asserted that defecting from the Democratic line would be a show of ethnic empowerment.

“This is not a debate if we can make folks a bona fide progressive or not. I think our priority here is to show Latino vote can no longer be ignored. And the way we can demonstrate that vote is by voting tomorrow on the WFP line, which has the platform that represents the priorities of the Latino community,” he said. “The governor’s going to be the governor. The only way he’ll know our priorities, is by coming out tomorrow and voting Working families.”

Walter Barrientos, political director for Make the Road Action Fund, argued that the Latino community could prove vital to Mr. Cuomo if he seeks the highest office in the land.

“We also want to make it clear that the community understands that the governor has aspirations of running for president. And if he really wants to have the backing and win as a presidential nominee, he really needs to address and show proof to the Latino community in New York City that he’s going to stand up for our issues,” he said. “Make no mistake, our fight starts on November 5, to push the governor and the new Senate and the new Assembly to push for these issues not only at the state level and at the federal level.”

Other Hispanic leaders such as Council Speaker Melissa Mark-Viverito and Congresswoman Nydia Velazquez are encouraging their community to vote on the WFP line–part of an apparent effort to ensure the party receives the 50,000 votes necessary to retain a place on the ballot.

Updated to clarify that the group involved was Make the Road Action Fund, the political arm of the non-profit Make the Road. 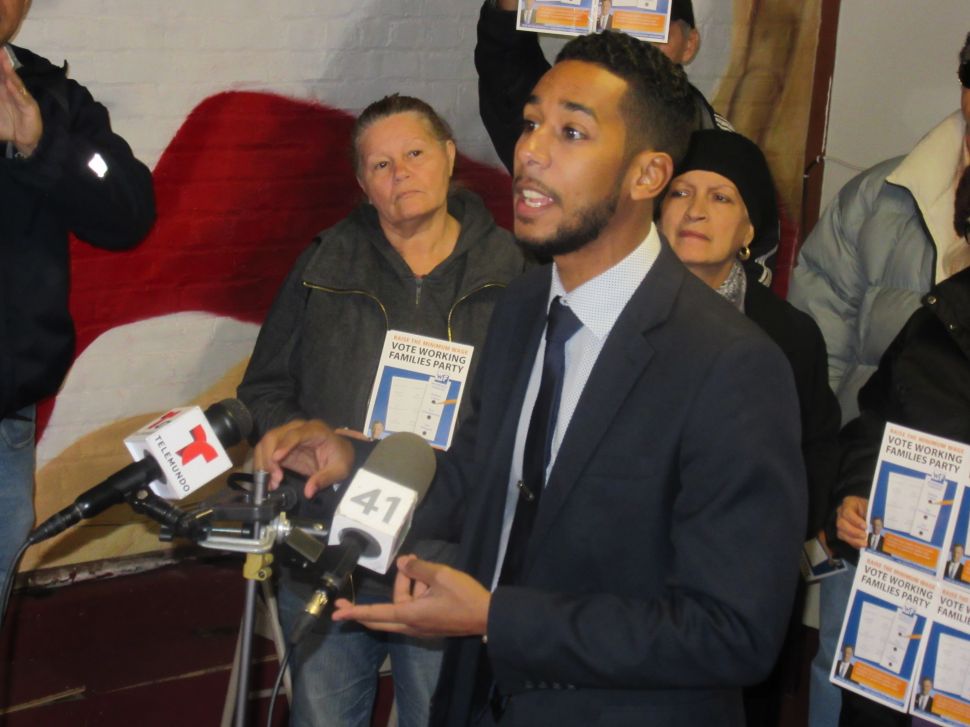