The Associated Press — along with NY1 — called the race for Mr. Cuomo, a Democrat, just minutes after the polls closed and before vote totals were available for Mr. Astorino and Howie Hawkins, a Green Party candidate. Later returns showed Mr. Cuomo winning about 54 percent of the vote with 86 percent of precincts reporting.

“We said that what makes New York special is when others are challenged by diversity, we celebrate it,” he added as chants of “four more years” rained down upon him. “We invite people in to join the family.”

The governor did not hold an election night party for his primary win but packed plenty of supporters into the Sheraton Hotel ballroom in Midtown. Speaking with the backdrop of an immense American flag, Mr. Cuomo promised to pass a bevy of liberal priorities like the Dream Act, public financing of elections and another minimum wage hike–and reminded everyone in the room he would still not tack too far left, where he is less comfortable.

“We said that we would not be pushed or pulled by the extreme forces on the left or the right, that we would always remember the guiding star–this service to the people,” Mr. Cuomo said. “It’s not about growing the bureaucracy or the lobbyists or the special interests. We were true to those principles.”

Unlike other speakers before him, he did not mention the dimming possibility of a Democratic takeover of the State Senate. “Choice” and “Women’s Equality” signs were waved in the crowed, alluding to the Cuomo-backed Women’s Equality Party–an effort that many said underminded the leftist Working Families Party.

All of the major liberal city lawmakers praised Mr. Cuomo on stage, including Mayor Bill de Blasio and Council Speaker Melissa Mark-Viverito. Each celebrated the governor, but also made sure progressive priorities and ideals were on even ground, in importance, with the governor himself.

“Our strength will grow and grow,” Mr. de Blasio said, promising a presidential election year could buoy the Democratic cause.  “What we have started here in 2014 will be even greater in 2016, here and across the country,”

Mr. Cuomo was a heavy favorite going into the race, far out-raising Mr. Astorino, the Westchester County executive, and pummeling him with negative television advertisements. But Mr. Cuomo endured setbacks throughout the campaign, including a well-timed memoir that barely sold any copies and a federal investigation into his handling of an anti-corruption commission.

Like Mr. Cuomo’s primary opponent, law professor Zephyr Teachout, Mr. Astorino sought to portray Mr. Cuomo as a corrupt governor after it was reported this summer that Mr. Cuomo prematurely ended a Moreland Commission to investigate public corruption and repeatedly meddled with the commission’s findings.

Mr. Astorino, who Democrats hammered for his socially conservative views, sought to tap into anger upstate over strict gun control measures Mr. Cuomo passed at the beginning of last year. Mr. Cuomo and his surrogates painted Mr. Astorino as a “Washington Republican” and “ultra-conservative” too far out of the mainstream to be taken seriously.

Still, unlike Mr. Cuomo’s primary rival Zephyr Teachout, the Democrats did not ignore Mr. Astorino. Mr. Cuomo carted in both Bill and Hillary Clinton for separate campaign rallies and packed union members into a raucous Times Square event for a final get-out-the-vote push before Election Day.

Mr. Cuomo carried undeniable advantages into the race. He spent tens of millions from his own war chest, once brimming with more than $30 million, and the State Democratic Party on ads, operatives and marshaled some of the state’s most powerful labor unions to run get-out-the-vote efforts. At times, enthusiasm for the governor among the electorate appeared low and Mr. Cuomo’s victory, for all the pageantry at the Sheraton, did not change that.

The governor never campaigned aggressively, but picked up the pace of campaign events as Election Day drew near. He also made decisions that critics charged were blatantly political, like instituting a mandatory quarantine for all people who came into contact with Ebola patients in Africa. The White House said such a policy was not grounded in science; days before the election, Mr. Cuomo gleefully pointed to polls that showed the decision was broadly popular.

Mr. Cuomo’s friendship with New Jersey Gov. Chris Christie, a Republican and chair of the Republican Governors Association, also paid dividends. Mr. Christie, despite anger from some Republicans, never supported Mr. Astorino and derided his campaign as a no-hope long-shot.

But Mr. Astorino did what he could to keep the race remotely close. He crisscrossed the state, even stumped in the heavily Democratic Bronx and tried to woo minorities, with his fluent Spanish, that typically support Democrats. Crossover votes, however, seemed to be in short supply.

“One thing is clear tonight: Andrew Cuomo is Governor of the most unequal state in America–a state with the most segregated public schools, an upside-down tax code, and an ever-expanding imbalance in economic and democratic power,” Ms. Teachout said. “The question is, will he continue to entrench that inequality by catering to the wealthy and well-connected or will he finally answer the rising call for a New York that works for everyone?”

Still, Mr. Cumo’s biggest round of applause came when he introduced a liberal icon–his father, former three-term Gov. Mario Cuomo. After Mr. Cuomo finished speaking, the elder Cuomo, now 82, shuffled slowly onto the stage. The father and son held hands and mugged for the crowd.

Mario Cuomo, walking off stage, did not.

This story has been updated with comments from Mr. Cuomo and Mr. de Blasio 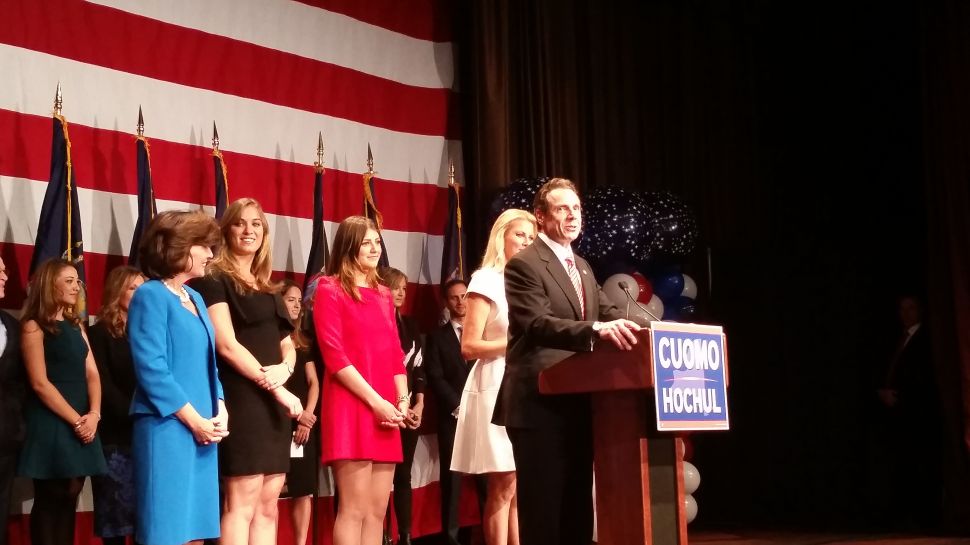