“All visitors viewing the sculpture do so at their own risk.” These words are etched on the glass that separates viewers from an active bee hive set atop the shoulders of a reclining nude sculpture at the Los Angeles County Museum of Art. The swarm of bees in Untilled (Liegender Frauenakt) is one of many works that features of living elements included in the first U.S. retrospective of by French artist Pierre Huyghe, currently on view at the museum through February 22.

These living elements, perhaps what the museum’s director Michael Govan was referring to when he said the show was full of “unusual things,” vary widely. They include Human, a white Ibizan hound with a single pink painted leg that traverses the galleries freely, occasionally emerging from some unknown stage left and exiting to some unexpected stage right. Nymphéas Transplant (14-18) (2014) is a murky aquarium that mimics the ecosystem beneath the surface of Monet’s lily-laden Giverny ponds, and alternates between dimly lit and obscured in cloudiness based on historic weather patterns from 1914 to 1918. A hermit crab occupies a replica of the head of Brancusi’s 1910 sculpture Sleeping Muse submerged in the aquatic environ Zoodram 5 (2011). And L’Expédition scintillante (Acte 1) emits snow, rain, and fog for programmed precipitation.

The disparate actors in Mr. Huyghe’s biosphere—the entire show is one large biologically choreographed performance—include the viewers too. Upon entering, visitors are engulfed by a closed, independent ecosystem orchestrated by Mr. Huyghe. The immersive quality of the show has been a central theme in most of his work since the early ’90s. And while the retrospective at LACMA takes a look back at the last 25 years of his career, some of the central elements and artworks included have changed since its original debut at Paris’s Pompidou last year; it has grown from 50 pieces to 60, and many older works have been swapped out for more recent ones.

In addition to the tuxedo-clad Name Announcer (2011), who personally addresses you as you enter, and a giant interactive video game titled Atari Light (1999) that periodically lights up a gridded ceiling, there are sculptural and video works in this wall text-free exhibition that make no offers of context or explanation. Mr. Huyghe’s retrospective is far from what museum-goers have come to think of as customary when it comes to surveys.

The star of the show—crowds will talk about this work long after they leave—is Untitled (Human Mask) (2014), a short film that debuted earlier this year at Hauser & Wirth’s London gallery. It begins with a close-up on a ginger-haired girl in a white mask—or so we think, until the moment that a monkey’s paw reaches up to stroke its wavy tresses. Over the course of 19 minutes, we follow this wigged macaque once trained as a waiter as it roams a shuttered restaurant in post-tsunami Fukushima, Japan. Gestures are disturbingly childlike against the eeriness of its ghost-like face; the experience of watching it on film is so surreal that Mr. Huyghe’s Brancusi-shelled hermit crab seems absolutely banal by comparison.

The show is a wild, occasionally bumpy ride through the mind of Mr. Huyghe, but despite how unnerving certain elements might make viewers feel at times, there’s no real physical threat. A continuous cloud of smoke obscures pheromones that normally relay the “sting!” command and subdues the bees, and the bi-colored hound is under the watchful supervision of Player (2010), the man in the LED mask trailing her. For those less familiar with the Mr. Huyghe’s controlled brand of nature-themed spontaneity, and even for those who are, the show as could use an up-front disclaimer: Prepare to Fall Down the Rabbit-Hole.

A retrospective full of living elements: #pierrehuyghe at #lacma 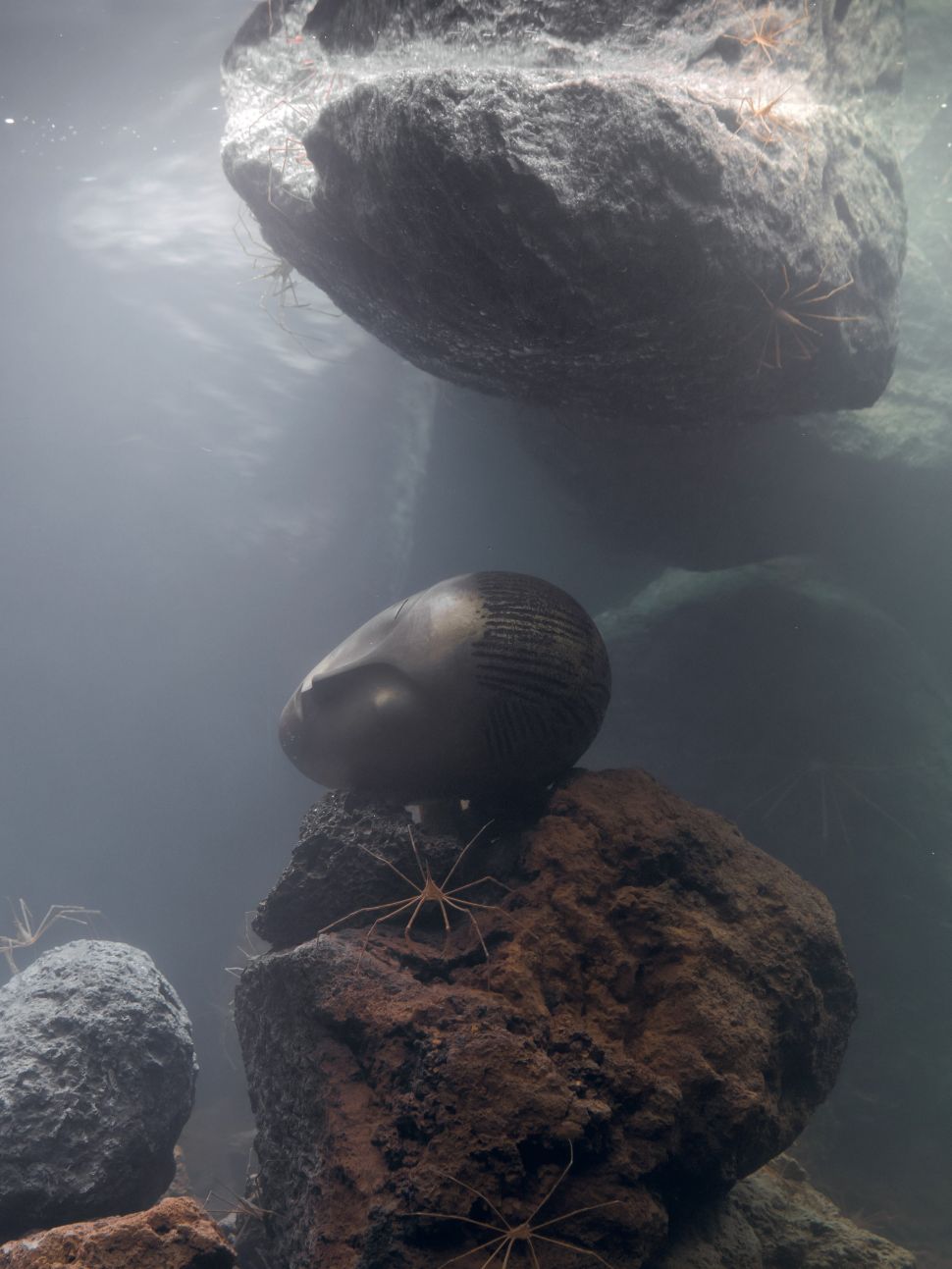