WHY YOU SHOULD SEE IT: The last time Ahmed Alsoudani had a exhibition in New York—in the winter of 2013—his work was on view alongside pieces by art world giants Francis Bacon, Philip Guston, and Paula Rego in a group show about issues of violence and power in painting at Marlborough Chelsea. He was the youngest in the bunch.

It was a big moment for Mr. Alsoudani, and the opening of his first solo show with Gladstone Gallery will be as well. The Iraq-born, New York-based artist has had solo shows at outlets like Haunch of Venison, the Wadsworth Atheneum, the Phoenix Art Museum, and the Portland Museum of Art since graduating from Yale in 2008, but his step to Gladstone marks a new chapter. His newest paintings retain the same traces of the frenetic energy that have permeated past canvases, but he’s not meditating on violence in the same way he has been. Instead, he’s taking a step back in order to take a look at a larger picture: what begets violence in the first place?

“There is no certain element that relates to a specific region,” he told the Observer when we visited his studio in Long Island City. “Sometimes, purposely, I’ll use certain figures in order for me to localize a place in that painting, but it’s not like I’m making paintings about the violence in Iraq…If I attach my painting to specific circumstances, the moment the circumstances are gone the painting will disappear.”

The resulting imagery is just as fragmented as past works, comprised piecemeal of seemingly random imagery. By themselves, they have the mysterious quality of a lone puzzle piece, but within each composition they tell frightening and complex stories. And unlike previous work, this time he’s left swaths of drawings that would normally be painted over untouched. 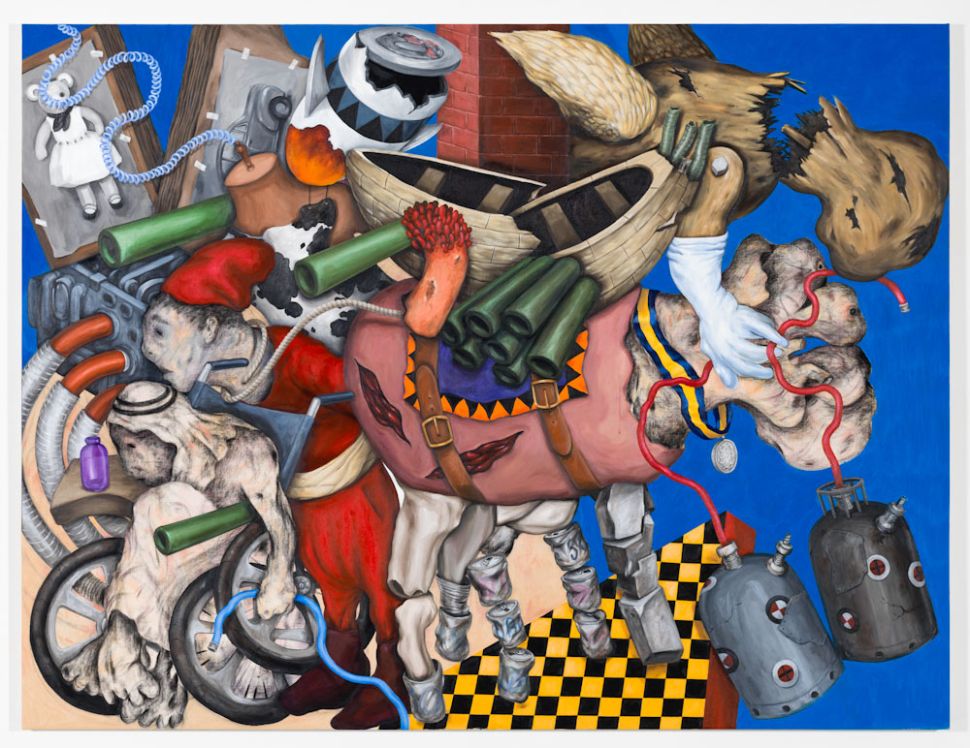