Turner Prize-winning artist Gillian Wearing unveiled a new public sculpture outside the new Library of Birmingham titled A Real Birmingham Family. The sculpture depicts two mixed-race single mother sisters, one visibly pregnant, and their two small sons. “I think so many governments speak the language of family values but they always talk as if it is a niche group and don’t let other families to be a part of that. Other families bar the nuclear family exist and we should really embrace that,” said the artist. [Telegraph]

President of the J. Paul Getty Trust James Cuno has penned a must-read article for the November-December issue of Foreign Affairs magazine titled “Culture Wars: The Case Against Repatriating Museum Artifacts.” Mr. Cuno is not in support of shipping any and all objects once “claimed” stolen back to their native nations, a matter institutions like the Getty, the Met, and British Museum are being pressured more and more about by foreign governments. “Cultural property should be recognized for what it is: the legacy of humankind and not of the modern nation-state, subject to the political agenda of its current ruling elite,” he says. [Los Angeles Times]

Robert Indiana’s Eight-foot-tall steel Seven sculpture will find a home in front of the Portland Museum of Art’s 7 Congress Square location on Friday, when it formally celebrated during the city’s First Friday Art Walk. Mr. Indiana is a longtime Maine resident and lives on the small island of Vinalhaven, near Rockland. [Portland Press Herald]

California’s Resale Royalty Act, deemed unconstitutional in 2012, will be reheard on December 15 in front of the entire Ninth Circuit Court of Appeals instead of a three-judge panel. The original law passed in 1976 gave artists five percent of the resale price when sold within the state or by a state resident for over $1,000. Artists such as Chuck Close, Laddie John Dill, and the estate of Robert Graham sued auction houses for unpaid royalties and are arguing that the royalty should hold in-state. [The Art Newspaper]

Write-ups on Sarah Thornton’s (of Seven Days in the Art World fame) new book 33 Artists in 3 Acts are beginning to role in. According to the Wall Street Journal, a large focus of the book is her central question “What is an artist?” Painter Carroll Dunham’s answer: “My initial reaction was that it was kind of lame, because it was such a fruitless thing to try to answer.” [Wall Street Journal]

The British Museum will now let visitors download and 3-D print replica versions of the priceless artifacts in its halls. Currently there are 14 models available through Sketchfab, including a statue from Easter Island and a bust of Amenemhat III. [Gizmodo]

Atlanta’s City Council met to debate an ordinance that would call for the city to approve all proposed murals on private property going forward. Not surprisingly, things turned heated, with one participant storming out and community members accusing representatives of the arts groups Living Walls throwing accusations of racism back and forth. Community members voiced that outside artists creating public works in their neighborhoods don’t consider residents in the process. “No other city in the country as far as we have discovered, requires its city council to consider and without standards approve or veto every mural on non-residential private property,” said attorney Gerald Weber. [Atlanta Journal Constitution] 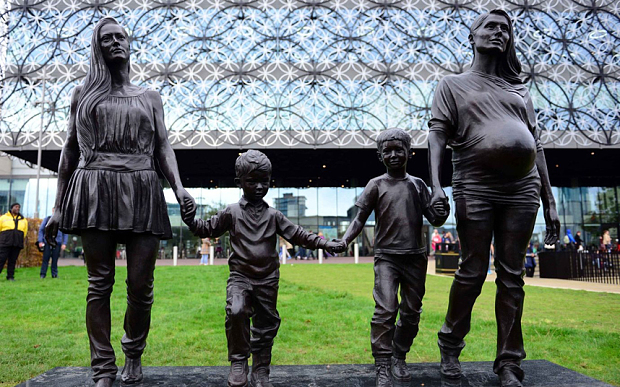