Assemblyman Karim Camara today unveiled new legislation that would slap warning labels on bottles of soda and other sugar-heavy beverages to notify consumers of the risks of diabetes, obesity and tooth decay associated with the drinks.

“This is about a pragmatic piece of legislation. This is not about an attack on an industry for the sake of the industry. This about doing what’s best for children and adults in our society,” said Mr. Camara. “We cannot afford for our children to continue to be overweight, to continue to have learning problems, to have health problems that may lead to difficult lives and at times illnesses that can lead to the loss of life.”

Bronx Assemblyman Jeffrey Dinowitz, who chairs the Consumer Affairs and Protection Committee, sent a statement in support of Mr. Camara’s legislation–comparing it to similar laws passed decades ago on tobacco products.

“Many years ago, when faced with a similarly devastating public health crisis, we chose to place warning labels on cigarettes and other tobacco products to allow citizens to make more informed choices about what they purchase,” Mr. Dinowitz said. “Given the scientific evidence of sugar’s negative consequences for our society, is not only appropriate, but incumbent, upon us, to use similar warning labels with sugar-sweetened beverages.”

The law would place labels not only on soda cans and bottles, but on beverage dispensers and containers of syrup and concentrate

Asked about former Mayor Michael Bloomberg’s unsuccessful effort to ban large sugary drinks citywide, and his call to expand the law statewide, Mr. Camara told the Observer he supported such regulations–but that they were not part of the current legislation.

“There’s a pressing need to address the issue of sugar-based beverages, and this is not the only effort, this is part of the effort to address that,” Mr. Camara said.

Soda manufacturers, however, argued that they are already making strides to offer lower calorie drinks and smaller portion sizes–as well as clarifying labels and funding new health education efforts. A spokesman also pointed to studies that American soda consumption is down even as obesity rates are up.

“Obesity is a serious and complex issue, but a misleading warning label on certain beverages will not change behaviors or teach people about healthy lifestyles.There’s a better way to empower consumers to make the choices that are right for them,” said Christopher Gindlesperger, spokesman for the American Beverage Association. “If we want to get serious about obesity, it starts with education – not laws and regulation.”

For the legislation to become law, State Senate Republicans led by Dean Skelos and Gov. Andrew Cuomo need to be on board. A source close to Mr. Cuomo said he was “reviewing the legislation” and Mr. Skelos did not return a request for comment. 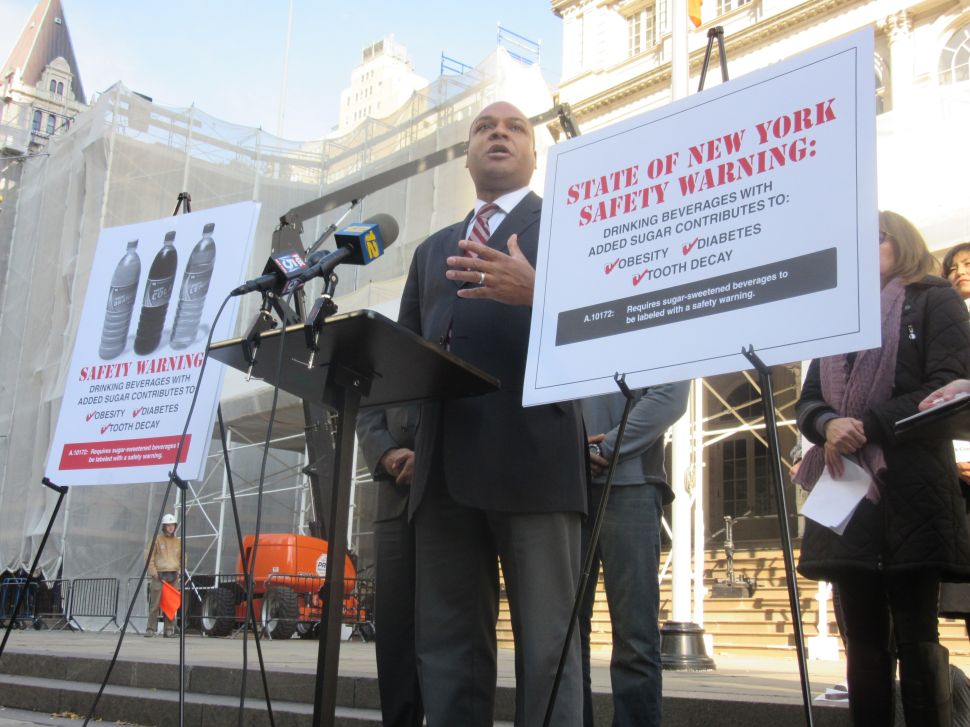