HACKENSACK AND LYNDHURST – On the final day of a campaign season where many statewide eyes will be on Bergen County’s election results, one of the most prominent statewide Republican politicians arrived to assist two Bergen GOP allies.

“I was in CD 5 today because Scott Garrett asked me to campaign for him,” Guadagno told PolitickerNJ. “He’s a great Republican and a great conservative, and I’m showing my support for him. [Democratic CD 5 challenger] Roy Cho is wrong on the issues, and he needs more than 24 hours to change his positions.”

Some political observers have argued that the CD 5 race is closer than expected because of two factors. One is the 2010 Congressional redistricting, which placed Democratic-dominated municipalities such as Hackensack and most of Teaneck into CD 5. Following these changes, approximately 70 percent of the district’s voting population lives in Bergen.

When asked by PolitickerNJ why he was not campaigning in his Warren and Sussex county strongholds the night before the election, Garrett noted Bergen’s attraction in the campaign’s waning hours.

“At the end, this is how it played out. Bergen is very important,” Garrett said. “When we run our campaigns, we are very pro-active. We don’t do it in response to the other candidate.”

During this campaign, Garrett was compelled to respond to criticism from the Cho campaign, particularly in response to a Garrett campaign mailer that claimed the six-term incumbent Congressman was “leading the effort in Washington to ensure the federal funds we needed were available quickly” following Hurricane Sandy.

Cho pointed out that Garrett was the only New Jersey Congressional representative who did not sign a letter in November 2012 that asked House leadership to build bipartisan support for the prompt delivery of federal aid for victims of Sandy.

Garrett is one of eleven members of Congress who voted against federal aid for victims of Hurricane Katrina in 2005, citing concerns about oversight. Garrett pointed out that he eventually voted in favor of federal disaster aid for victims of Sandy.

On Election Day eve, Garrett stood by his views.

“On the issues that [the Cho campaign] attacked us on, we pushed back simply with the facts,” Garrett said. “I’ve stuck to my record.”

Guadagno later joined Donovan before about 150 people at a Lyndhurst catering hall. Moments after Guadagno and Donovan embraced, flanked by GOP Bergen candidates Robert Avery and Bernadette Coghlan-Walsh, Donovan explained why she felt confident that she would hold off Democratic challenger Jim Tedesco.

“South Bergen is my home, and the voters have always been good to me here,” Donovan, who grew up in Lyndhurst, told PolitickerNJ. “I’m anticipating that south Bergen will come out again for me tomorrow.” 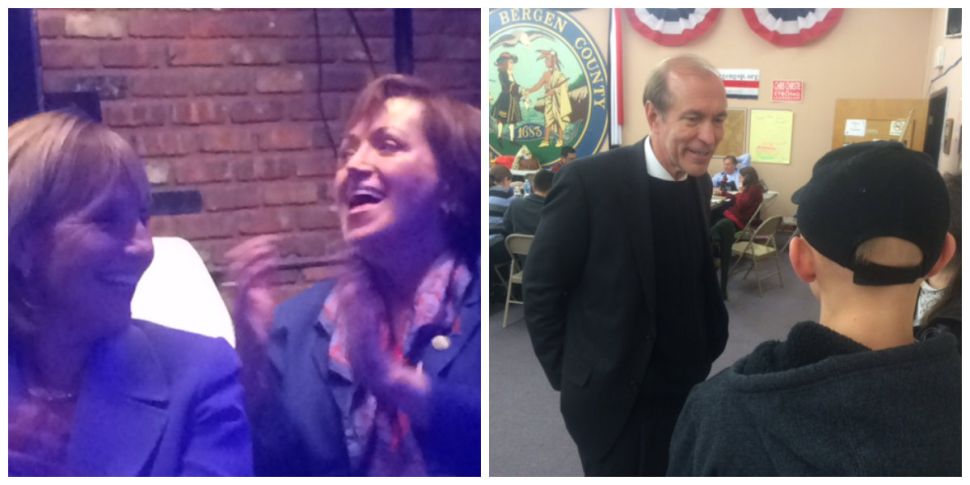