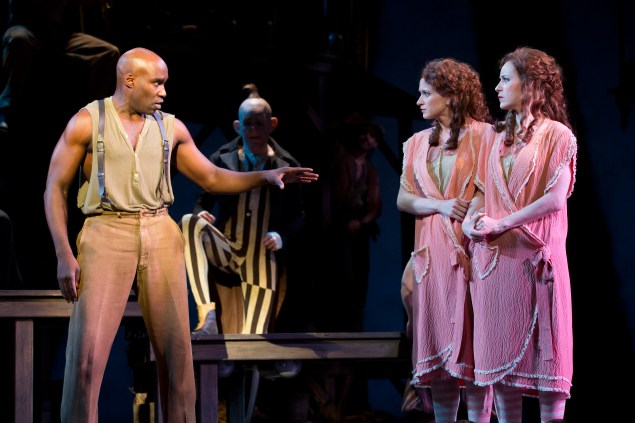 Side Show is the magnificent revival of the 1997 musical about Violet and Daisy Hilton. (Photo by Joan Marcus)

Double the dazzle, double the joy. Double the pleasure, double the fun. Side Show is the fabulous Broadway cult musical with two of everything, including twice the entertainment value of almost everything else in town.

With wheels oiled and pistons ground, the magnificent revival of the 1997 musical about Violet and Daisy Hilton, the conjoined twins who endured a life of shame, fear, ridicule, cruelty and pain to rise to the heights of show business during the Depression, just might achieve the hit status the original production was denied. It closed too soon to nightly standing ovations from sold-out audiences, fans and even critics, all of who petitioned the producers to keep it running. Well, here it is again, with a revised book and a partially re-written score by Bill Russell and Henry Krieger, who have added a few vital songs that move the narrative into a tighter frame while wisely retaining all of the pulsating hits. You lose nothing and gain even more. If you saw and loved this show with its mixture of drama, poignancy and splendiferous musical staging enhanced by the career-defining star turns of Alice Ripley and Emily Skinner, you will love it with equal measure this time around. If you are finally getting a chance to see Side Show for the first time, get yourself to the St. James Theatre without missing a beat. It’s a once-in-a-lifetime experience you will never forget.

From the opening number, when the circus side show comes to life with freaks and oddities—the bearded lady, the man with three legs, the geek who sucks blood from the broken neck of a live chicken, the human pincushion, the dog boy, the midget Cossacks and even a resident hermaphrodite—you know you’re no longer in the safety of your grandma’s front-porch swing. Under the hot, flashing, no-stone-unturned guidance of Oscar-winning director Bill Condon (Dreamgirls), the stage is set for the harrowing true story of the sealed, hothouse world of the beautiful Hilton sisters, born in England to an unwed mother, raised by an abortionist they called “Auntie” and, after her death, sold to her unscrupulous husband who exploited them ruthlessly as indentured slaves.

The story progresses from ugliness, deprivation and starvation to the heights of vaudeville, led to fame and success by the two men who loved them. One of them was gay and the other wouldn’t marry until they were surgically separated. Despair followed them through life, but they did crack the Ziegfeld Follies and the movies and made history. It all ends with their landing starring roles in MGM’s harrowing movie of Tod Browning’s Freaks, leaving you with the impression that their nightmare would find a happy ending at last.  It was not to be, and if you want to learn more about this hair-raising story, see the astounding documentary Bound by Flesh, which is available on Netflix and sold in the St. James lobby.

But for a rousing and momentous thrill, steaming along at a marvelous pace with marvelous songs and visually spectacular surprises, Side Show is all the excitement you can take in one sitting. In addition to the enhanced production values, the titanic performances and the dark inner life of the show suggest a wider, ever pertinent scope: the desire of the disenfranchised to make sense of the world around them. Even the theme of the show—the unhappy trick of fate that makes you different can also be the magic that makes you special—leaves you moved, charged and cheering as few musicals do.

“Come look at the freaks/Come gape at the geeks/They’ll haunt you for weeks,” sings the barker on the carnival midway (a leering, scary Robert Joy). And he means it. Monster babies, the man with rabies, and the human reptile have all found their home, but when the centerpiece arrives as two sisters with different personalities and dreams, joined at the hip in one body, Side Show moves into your heart. One wanted to be normal, like everyone else, and the other craved recognition and applause for herself alone. No one could replace the original leads, Alice Ripley and Emily Skinner, who turned into Betty Grable and Alice Faye before your astonished eyes, but with mellifluous voices raised on high enhanced by platinum curls and Technicolor smiles, newcomers Erin Davie and Emily Padgett look like identical twins, too. When they dance, cleverly choreographed by Anthony Van Laast to move in place doing awesome, impressive things with their arms and legs while their hips remain touching, it’s a challenge few actors have ever faced. They are, literally and figuratively, connected, and you’ve never seen anything like it.

The pulse-pounding score is a return to the kind of passionate melodies, comprehensible lyrics and pure magic we used to get in the great days before jukebox musicals. The two unforgettable show stoppers that turned the original cast CD into a best seller, “Who Will Love Me As I Am?” and “I Will Never Leave You,” are bracingly preserved and intact. And beneath the glittering gowns and razzmatazz, there is always the underlying tragedy of their plight as one twin marries the man who loves her too little and the other twin loses the man who loves her too much. As the three men who shaped and nurtured the Hilton sisters, Ryan Silverman, Matthew Hydzik and David St. Louis—in the roles originally created by Hugh Panaro, Jeff McCarthy and Norm Lewis—are pluperfect in a show that throbs with so much vitality and imagination that you can’t absorb it all in one visit. There are tears and soaring flights of fancy and in the end, when the cast takes individual curtain calls, you can hear the screaming approval a block away.

Side Show is, quite lavishly but honestly, nothing less than electrifying. 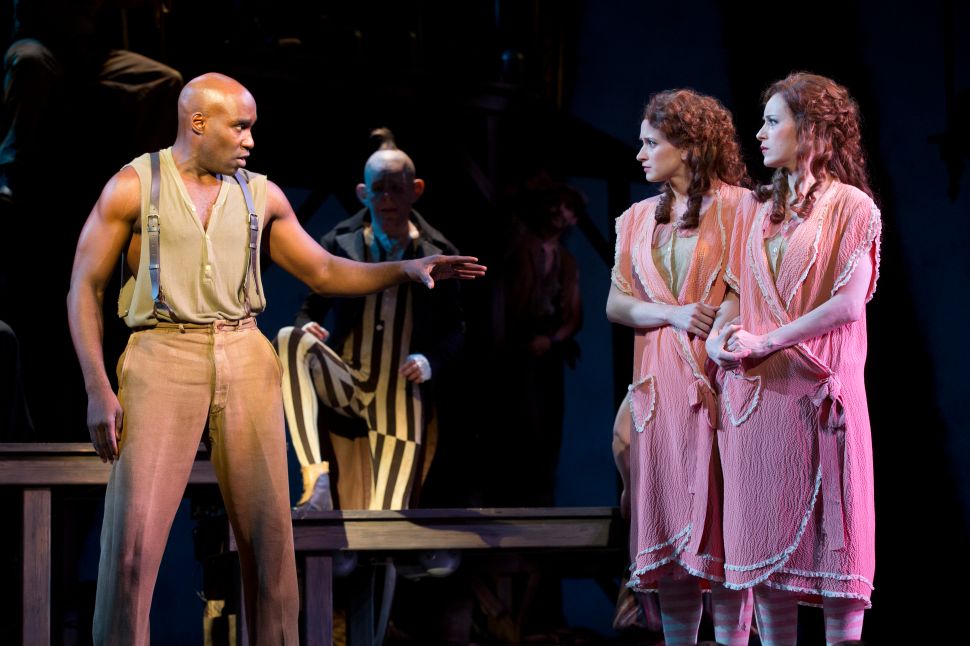