Mayor Bill de Blasio said this afternoon he voted against a controversial redistricting proposition, joining a chorus of Democrats opposing the measure–and bucking the governor.

Known as Proposition 1, the amendment would purportedly establish independent redistricting, though critics argue it will enshrine gerrymandering in the state constitution.

“I think we have to do more. I think all over the country this has been a big issue–how we get to fair redistricting,” Mr. de Blasio told reporters after voting in Park Slope, Brooklyn. “We’ve seen in some states, most notably Texas, extraordinary examples of really unfair gerrymandering that have set back that state in this country.”

Mr. de Blasio said New York, when it comes to redistricting, needs to be more like California.

“What we need to move towards is a model more like California’s, much more objective redistricting process that really ensures the districts represent the organic reality of the community,” he said.

The proposition, quietly backed by Mr. Cuomo and more loudly championed by the good government group Citizens Union, would replace the existing six-person Legislative Task Force on Demographic Research and Reapportionment as district-drawer with a new 10-member panel. Critics say the new system would not change anything because the state legislature would appoint members of the panel and lawmakers would have the power to tweak the lines if they don’t like them.

Mr. Cuomo rode into office promising to reform the redistricting process, which will next take place in 2022, but disappointed many good government advocates when he struck a compromise in Proposition 1 that many say doesn’t go far enough. Mr. de Blasio, who joined State Comptroller Thomas DiNapoli and a host of state lawmakers in the city by opposing the proposition, want the governor to go back to the drawing board and put forth a plan that would take politics completely out of the redistricting process. Proponents of Proposition 1 contend some redistricting reform is better than none at all.

Democrats are especially frustrated because they were in the minority when district lines were redrawn in 2012. This gave Senate Republicans the power to craft districts that protected their incumbents–and, some argue, weaken minority representation. 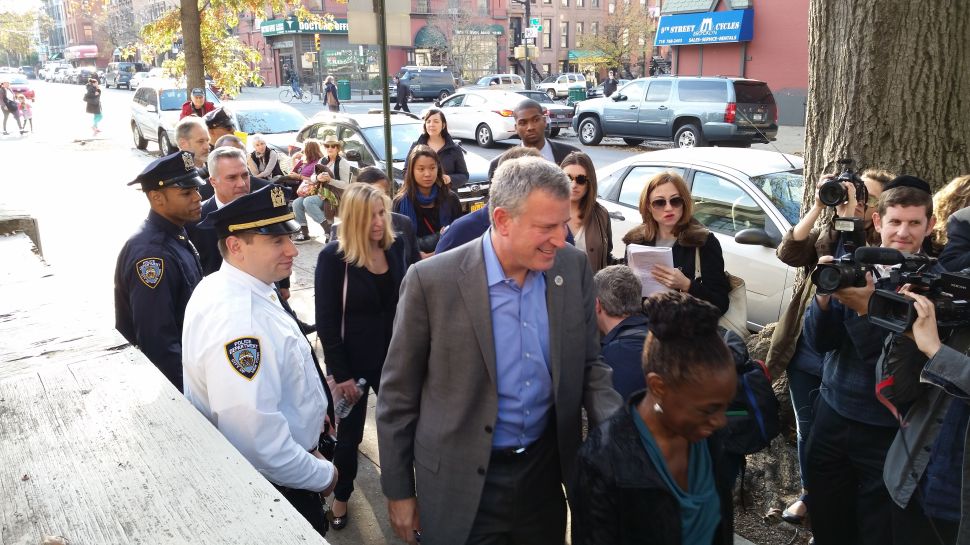