Fresh off a media blitz urging Democrats to be Democrats in 2016, Mayor Bill de Blasio weighed in on the presidential race again this morning — saying he hopes Hillary Clinton runs and naming Rand Paul as the most fearsome Republican contender.

Mr. de Blasio’s criticism of Democrats who have hedged to the middle rather than leaning left has often been read by New York politicos as something of a veiled jab at Gov. Andrew Cuomo, who ran on a centrist platform rather than a progressive one. But in Washington, Mr. de Blasio’s advice seemed perhaps pointed at a different centrist Democrat: Ms. Clinton, the former secretary of state whose 2000 Senate campaign Mr. de Blasio ran. Mr. Allen asked if the mayor believed there was room to her left on the presidential stage.

Could Ms. Clinton be the one to do that? Mr. de Blasio said he was “hopeful.”

“Look, I think she should. I think it’s necessary. I think a lot about her history and origins suggest its natural for her — if you go back to the work she did originally, it gets to these same issues,” Mr. de Blasio said, pointing to work on healthcare reform and family medical leave.

But Ms. Clinton has not necessarily been touting the kinds of progressive economic issues Mr. de Blasio has argued Democrats need to champion. Mr. de Blasio said he didn’t believe the country had had a chance to see much of her politics in a post-2008-economic-crisis world.

“During a lot of that time Secretary Clinton was Secretary Clinton, obviously not in the political environment — so I don’t think we’ve had an opportunity to hear her in this new reality,” he said.

Many have pointed to Massachusetts Senator Elizabeth Warren as a more progressive potential candidate for 2016, but Mr. de Blasio said he did not want to “conjecture” on whether she might run.

“I think she’s saying some very important things. I think it’s, she’s one of the really indispensable voices in our national debate,” he said.

When it comes to Republicans, Mr. de Blasio named Kentucky Senator Rand Paul as the potential biggest threat to Democratic hopes of holding on to the White House — perhaps a bit of a snub to contender from closer to home, New Jersey Gov. Chris Christie.

“Although I could not disagree with him more on a host of issues, I do think he evinces a certain authenticity that any good Democrat should worry about,” Mr. de Blasio said about Mr. Paul.

And with the way the financial crisis has changed politics, Mr. de Blasio said he believed that authenticity and the ability to speak honestly about economic issues is in demand from either party.

“In other words, Mitt Romney was exactly what the doctor did not order,” Mr. de Blasio said, knocking Mr. Romney for backing away from his past beliefs and his role in Massachusetts’ healthcare system.

In contrast, Mr. Paul’s willingness to stick to his guns — even when it might hurt him — makes him a better choice for the GOP, Mr. de Blasio said.

“To the extent that there is a libertarian philosophy that he sticks to regardless, of political convenience, I think that makes him a stronger candidate than many,” Mr. de Blasio said.

The mayor is hoping to play a big role in the 2016 elections: he is lobbying hard for Brooklyn to host the Democratic National Convention, and announced this morning he’d secured $10 million out of $100 million in private funding he’s vowed to harness for the endeavor. 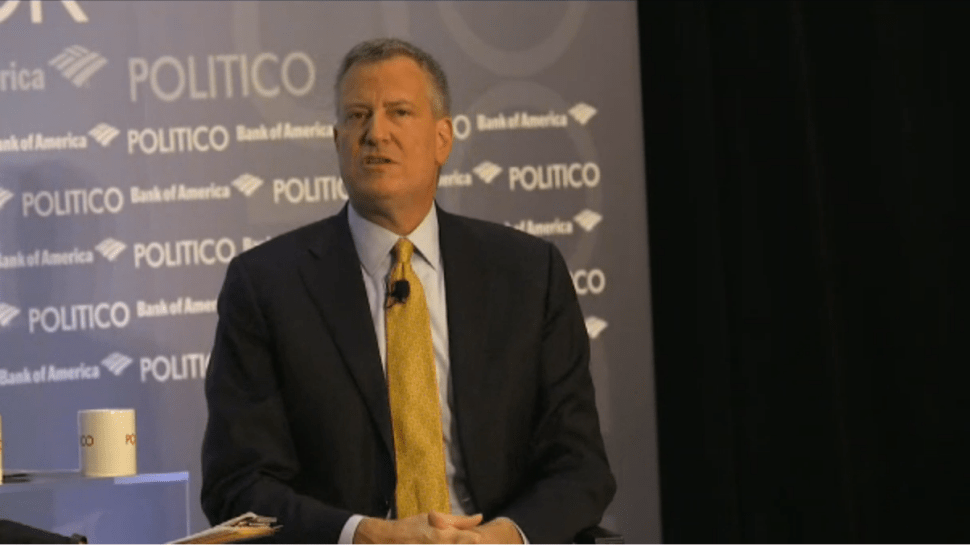