“There were some differences of opinion last month on how to handle medical workers exposed to Ebola, but in 20-20 hindsight, all of our elected leaders get good grades from New York City voters,” said Quinnipiac University Poll Assistant Director Maurice Carroll.

20 percent gave Mr. Cuomo a thumbs-down, as opposed to 17 percent for Mr. de Blasio. But Mr. Cuomo and New Jersey Gov. Chris Christie’s tougher quarantine policy was also vindicated in the poll: 67 percent said the controversial 21-day quarantine for any individual who had come into contact with an Ebola patient was “about right,” while only 22 percent said it went “too far.”

“Voters reject the complaints of some civil libertarians that Gov. Andrew Cuomo and Gov. Christopher Christie were too tough in their response.  Just about right, say two-thirds of city voters,” Mr. Carroll added.

After a Manhattan doctor was rushed to Bellevue Hospital with Ebola in October, Mr. Cuomo and Mr. Christie announced the quarantine policy without Mr. de Blasio’s consent. The tougher, more dire tone the two governors took was a stark contrast to Mr. de Blasio’s approach, which cast the Ebola patient, Dr. Craig Spencer, in a heroic light and initially downplayed the need for a quarantine policy like Cuomo-Christie plan.

When Dr. Spencer was released from Bellevue last week, Mr. de Blasio hugged him. Mr. Cuomo did not appear at the press conference. 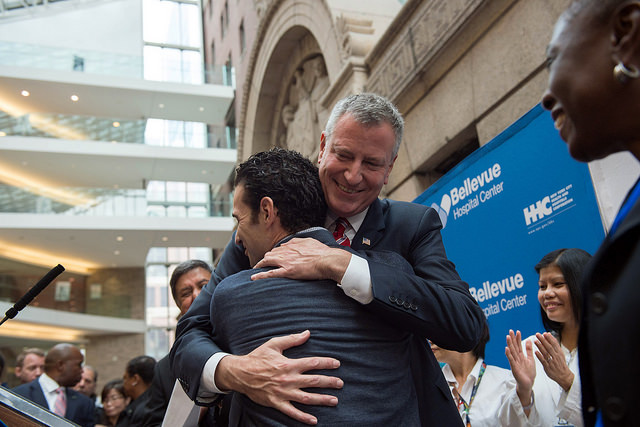