Oxford, England, 5 am – I’m trying to get two hours sleep tonight prior to my flight back to America, but cannot. I am supercharged from tonight’s debate at the Oxford Union on Israel versus Hamas. It was easily the most hard-fought debate on Israel I have ever participated in. It was ferocious, exhilarating, vicious, electrifying, and disturbing.

When I first called my close friend Dennis Prager, the celebrated American radio host, to join me at the Oxford Union for their premier Middle East debate of the season, Dennis was at first reluctant to come. He has to broadcast his national show every day.

I told him it was a once-in-a-lifetime opportunity to defend Israel at the world’s most prestigious debating society. Europe was turning against Israel. Oxford was the world’s most famous University, educating future world leaders. The scars to Israel’s reputation from the war in Gaza was still fresh. Now was the time.

He agreed to come.

Dennis, like me, is a veteran of debates on Israel. But I informed him that nothing could prepare him for the ferocity of the attacks on Israel that we were likely to endure.

Indeed, as the debate began before a capacity audience, Dennis seemed stunned at what was being said. Israel is an apartheid regime. Israel is slaughtering the Palestinians and is guilty of genocide. Israel is doing to the Palestinians exactly what the Nazis did to the Jews. What the Jews experienced in the Holocaust is exactly what the Palestinians are enduring at Israel’s hand. Israel in its six-decade history has had one goal: the theft of Palestinian land and the eradication of the Palestinian people. America is like ISIS. ISIS beheads only a few prisoners, but America annihilates innocents in Pakistan each and every day with drone strikes. There is no real difference. Israel is guilty of war crimes. Israel’s security fence is an apartheid wall that is built mostly through the gardens and property of innocent Palestinians. Hamas does some bad things. But it’s all Israel’s fault. Hamas is a bonafide resistance movement to Israel’s occupation. Terrorism directed at Israelis is an organic response to Israeli colonial rule

Many of the arguments came from world-renowned Israeli academic Avi Shlaim, with whom I always had a warm relationship in the eleven years I served as Rabbi to the students at Oxford. The other arguments came from a highly intelligent female Oxford doctoral candidate, with whom I interacted warmly at the pre-debate dinner, and from a Berkeley-Oxford female Professor who was likewise pleasant. The rest of the attacks came from Oxford students in the floor debate segment of the program.

I had heard all these things before. But never from some of the most highly educated people in Europe. And never with such ferocity and vehemence.

Dennis and I fought back with every fiber of our being. Hamas is a genocidal organization that proudly touts its charter calling on the annihilation of Jews utterly unconnected to any conflict. It seeks the murder of all Jews, including those sitting in the Oxford Union chamber. It aids and abets honor killings of Palestinian women, shoots gay Palestinians in the head on false chargers of collaboration, machine-guns all Palestinian protesters who dare to defy its rule, violently punishes any form of criticism, engages in daily forms of deadly incitement against Jews, celebrates when Westerners, including in Britain, are blown up by bombs, ended any vestige of democratic rule once it was elected, and builds its military installations under hospitals and nurseries so that the infirm and the vulnerable can serve as human shields to its cowardly terrorists. Israel has tried since its creation to make peace with Arab states and has endangered its security with repeated territorial concessions that were met with nothing but terror attacks. Arabs in Israel live with greater freedoms and human rights than any Muslim country on earth. There is no excuse for terror. Jews even under the horrors of Hitler didn’t turn to blowing up German children. The justifications for terrorism that were being offered were an affront and an abomination to Islam which, just like Judaism, abides by the commandment not to murder.

The debate was electrifying and deeply felt on all sides. Rather than being dispirited, the small but defiant pro-Israel lobby that sat behind Dennis and me threw a barrage of ‘points of information’ at the Israeli-attacking academics. The full video of the debate will be available on the Oxford Union website in a few days.

When the debate was over the President of the Union invited all to drinks. I sat with my opponents. I discussed their trips to Israel. The wounds of the debate were raw but the Union tradition is one of courtesy and mutual respect, whatever the disagreements.

And rather than feel at all dispirited, I was energized and alive. I knew from the moment I accepted the debate invitation a few months back that we would lose the vote. Indeed, hearing the jeers against Israel from the vast majority of those in attendance was painful. But we would fight with all our might. We would enter the lion’s den for Israel. We would defiantly tell the truth of the noble and majestic democracy that is the Jewish State of Israel. We would strike a blow for the Jewish state in an extraordinarily hostile environment.

(Interestingly enough, Naomi Wolf was there, having just given a lecture attacking Israel for human rights abuses three hours before our debate. All this was curious, given that Naomi had withdrawn from our planned debate on Israel in New York with the excuse that she was going to speak at Oxford. She never mentioned that we would be there on the exact same day).

And we made tremendous progress.

As soon as the debate was over a group of students asked me for an immediate meeting, that night, to start up the Oxford L’Chaim Society once again to defend the honor of Israel. The student who offered to be President was not Jewish. He told me that as of March of this year he was an active member of Pal Soc (the Palestinian Society) at Oxford. He endorsed and fought for boycotts of Israel. But then he heard me speak at the Union in the debate in Iran. It changed him, he said. He left Pal Soc and joined the tiny but courageous pro-Israel lobby.

Sure enough, at the debate the Israel side lost the vote. But we gained our adversaries’ respect.

And to be fair to the Union, we were not jeered, interrupted, or heckled. Amid the ferocious battle for Israel and the hundreds of students poised against us, we made our case with passion and each side respected the other’s right to speak. That’s why I love the Oxford Union, and why I did countless joint events with the Union when I was Rabbi in Oxford.

I believe with all my heart that Israel can and will win arguments in the marketplace of ideas. If not today, then tomorrow. It ultimately will happen. The truth will prove victorious. We dare not shun debates. We must welcome and engage them.

Conclusions: First, Israel is under siege on European campuses. It has determined and active adversaries who are clobbering the more timid Jewish opposition. Second, if we stepped up our game on campus we can begin to reverse the tide of defamation and fraudulence to which the Jewish state is being constantly subjected.

Rabbi Shmuley Boteach, “America’s Rabbi,” is the international best-selling author of 30 books, winner of The London Times Preacher of the Year Competition, and recipient of the American Jewish Press Association’s Highest Award for Excellence in Commentary. He has just published Kosher Lust: Love is Not the Answer. Follow him on Twitter @RabbiShmuley. 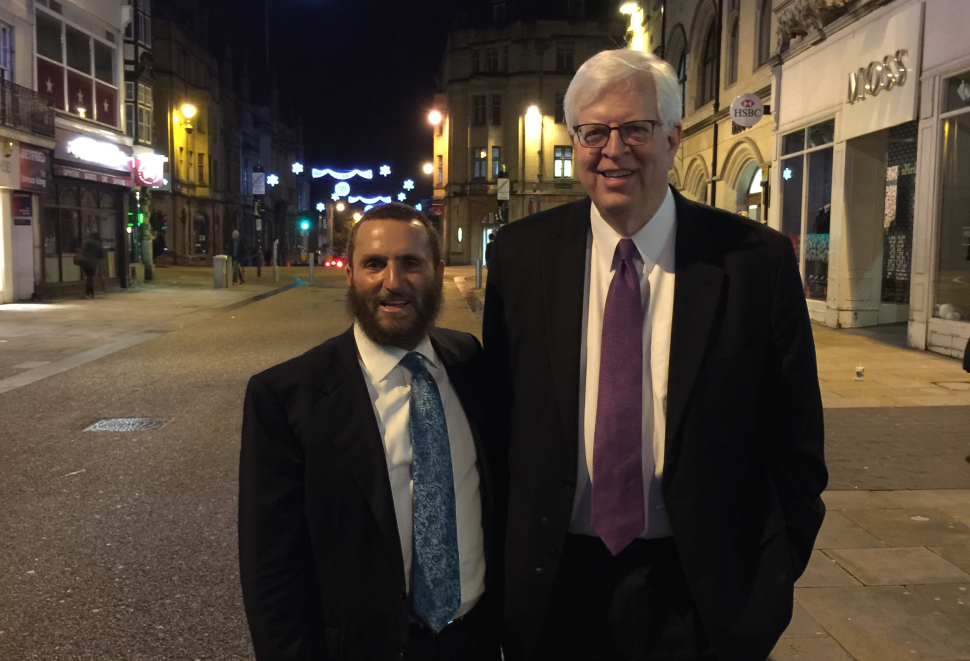