Campbell Brown’s hand strikes the straw in her drink, launching a chunk of ice into the air.

“Don’t parents have a right to weigh in here? I mean, don’t they?” Ms. Brown leans in, suddenly furious. “And a parent at a failing school in the Bronx—how does she get her voice heard, the single mother whose kid is stuck in the failing school?”

Ms. Brown is far from done.

The single mother, she continues, is “not Randi Weingarten, who has enormous power and enormous money and enormous influence.”

The mere mention of Randi Weingarten, president of the powerful American Federation of Teachers, is enough to melt the Southern gentility off Ms. Brown, the CNN anchorwoman-turned-education activist. Her gentle grin vanishes. She aggressively waves her hands.

In 2010, the Louisiana native left television news, where ratings are king and the superficiality began to wear on her, for the unpaid position of education advocate. She now pens Op-Eds, stages press conferences and runs two nonprofits, the Partnership for Educational Justice and the Parents’ Transparency Project, which, according to its Facebook page, aims to “expose deals that put special-interest groups ahead of NYC students.”

Ms. Brown finds herself, like her friend Eva Moskowitz, CEO of Success Academy Charter Schools, in the crosshairs of people like Ms. Weingarten. Critics see her as a shallow front for Wall Street robber barons trying to eviscerate teachers unions and make public education a for-profit venture.

“I’m a reporter, I mean that’s all I know how to do and I have a platform which allows me to give voice to people who don’t have one,” Ms. Brown told the Observer late last month at a café in lower Manhattan.

Ms. Brown’s cri de coeur is not charter schools per se, though she sits on the board of Ms. Moskowitz’s growing company and adopts the fine-tuned rhetoric of their ilk (replace the word charter with choice, for starters). Rather, she is committed to reforming teacher tenure, railing that it’s just too damn hard to dismiss bad teachers in New York City, particularly sexual predators.

She tells a quick story about how she successfully marshaled parent outrage to force an abusive teacher from a public school classroom in Queens. “This system is so broken,” she said. “If you don’t put the power to remove teachers in the hands of the chancellor, the person who ultimately is responsible for the kids in the system, then that is a broken system. There’s no way to argue that that shouldn’t be fixed.”

“The union is gonna lose this battle,” vowed Ms. Campbell.

Following a lawsuit against teacher tenure in California, one of Ms. Brown’s nonprofits, the Partnership for Educational Justice, filed a suit to challenge the New York State Education Department’s employment policy. The suit argues that the protections make dismissing terrible teachers all but impossible and disproportionately saddle poor and minority students with lousy educators. The California lawsuit, upheld by a superior court judge, has been stayed pending an appeal.

Why Ms. Brown is now obsessed with the work rules protecting unionized teachers is a question many of her critics ask. Divining her true motivations (Pretty foot soldier for the hedge fund managers? Willing puppet of a GOP husband?) is a parlor game played among her detractors.

And it’s one she swats aside.

“What I’m doing now matters more than anything I’ve done before,” she says. Ms. Brown explained that becoming a parent of two boys—neither of which attend public school—motivated her to think seriously about the future of education.

“So much is at stake and I think I rarely felt that way about television journalism. With the exception of a few stories that I covered that, you know, were incredibly powerful and my experience in TV was definitely an evolution going into it believing, probably over-idealistically that you would do more to impact people’s lives,” she said.

Ms. Brown departed the television world for many reasons—low ratings on her CNN show didn’t help—but one reason she cited was the false equivalency many journalists are forced to regurgitate if they want to appear objective. All sides are not equally right, Ms. Brown argued, and on education reform, she found herself unhappily muzzled.

“You know, on this issue there’s a right side and a wrong side and I’m not going to pretend that there’s balance,” Ms. Brown said. “It would be hard for me to cover it as a reporter because I would have to pretend that both sides have merit when it’s very clear to me that they don’t.”

Labor-affiliated groups acquainted Ms. Brown with the bare-knuckle way of municipal politics when they launched a public relations blitz against her earlier this year. Replete with a website—realcampbellbrown.com, brandishing the slogan “Right-Wing. Elitist. Wrong”—and a report about her alleged ties to conservative causes, the campaign slammed Ms. Brown for once being a registered Republican and failing to disclose the donors of her nonprofit. (Ms. Brown, who says she is non-partisan, disavowed the blitz as offensive and even sexist. She said the donors, some of whom will come forward soon, have a right to privacy.)

Mother Jones, the liberal, pro-labor investigative magazine, rebuked Ms. Brown for using a Republican-affiliated consulting firm to craft a television ad that ran in the mayoral race last year. Attacking candidates like Anthony Weiner and future Mayor Bill de Blasio for allegedly not taking a stand against making it easier to dump inept and dangerous teachers, the ads ran throughout the race and made Ms. Brown—used to covering political campaigns from the outside—a participant in the line of fire.

What seems to gall Ms. Brown’s opponents most is that she lacks a background in education. Ms. Weingarten writes Ms. Brown off as a misguided lightweight. “In our culture, the John Wayne types get more headlines than the John Dewey types,” Ms. Weingarten told the Observer, referring to the pragmatist philosopher. (Ms. Brown acidly noted she had invited Ms. Weingarten on her show “many times” and the union leader declined.)

In response, Ms. Weingarten pivoted straight to Ms. Brown’s credentials, or lack thereof: “You don’t know schools, you don’t know teachers and you don’t really know New York and you really haven’t earned the right to be that kind of advocate—a lot of people generally think it’s opportunistic and I think she herself personally hasn’t gotten the traction that she initially wanted to get.”

Academics on the left say weakening teacher tenure, which Ms. Brown equates to a paradigm-shifting, civil rights issue of our time, is not proven to boost educational outcomes. “Quite simply: there is no research demonstrating causation between teacher tenure laws and lower rates of student achievement, which is the entire argument behind the lawsuit,” wrote Alyssa Hadley Dunn, an assistant professor of teacher education at Michigan State University, in a Washington Post story examining claims Ms. Brown made during an appearance on The Colbert Report.

To critics, Ms. Brown can seem like a moneyed voyeur treating education reform as a pet project. Tall and telegenic, Ms. Brown, 46, lives in Tribeca. She is married to Dan Senor, an advisor to Mitt Romney who previously served as the public face of the Coalition Provisional Authority during the dismal early days of the Iraq War.

“While it’s laudable that she wants to help black and brown children and let that be her charitable, philanthropic work now that she’s no longer an anchor, we the parents are the real stakeholders and what Campbell has attempted to do is bully us and hijack us on a lawsuit we filed first,” said Mona Davids, the president of the New York City Parents Union, another teachers union antagonist.

Ms. Davids’ beef is that her group also filed a lawsuit similar to Ms. Brown’s—they were consolidated, though Ms. Davids argued her lawsuit was different because she was not challenging teacher tenure, just the “last in, first out” seniority rules and the alleged difficulty of removing “racist, sexually abusive teachers,” in Ms. Davids’ words.

“She thinks because she’s wealthy, connected, has hedge fund money behind her, she can come in and push parents aside and make our struggle be about her,” Ms. Davids said.

In an environment where American high school reading and math scores can’t crack the top 20 worldwide, each side of this issue plays the underdog card. Teachers unions say their enemies are the 1 percent bankrolling sympathetic politicians to push a charter school agenda; Ms. Brown points out that it’s the unions themselves that represent the goliaths in this fight. Ms. Brown does traffic in elite circles, but her motives, allies insist, are genuine.

“She didn’t come at this the way many of us did through the schooling lens, she came at it as a smart person who knows how to do investigative journalism only to find that there were really perverse incentives in schools and schools are not as much about children as the interests of adults,” Ms. Moskowitz said. “She’s just a powerful, persuasive presence.”

The local political winds may be blowing at Ms. Brown’s back. Gov. Andrew Cuomo and the Republicans in control of the State Senate celebrate charter school growth and resent teachers unions. Ms. Moskowitz’s Success schools are booming. The nemesis of charter schools, Mayor Bill de Blasio, is tempering his rhetoric.

Ms. Brown thinks she has history on her side.

“What I’d love to see is for us to reach a tipping point the way we did for marriage equality. Where there was so much focus and attention around an issue that it forced many people to wake up, to really take a moment and think about it and realize that it was a moral issue,” she said.

“And I’d love,” she adds, “to help create that same kind of moment.” 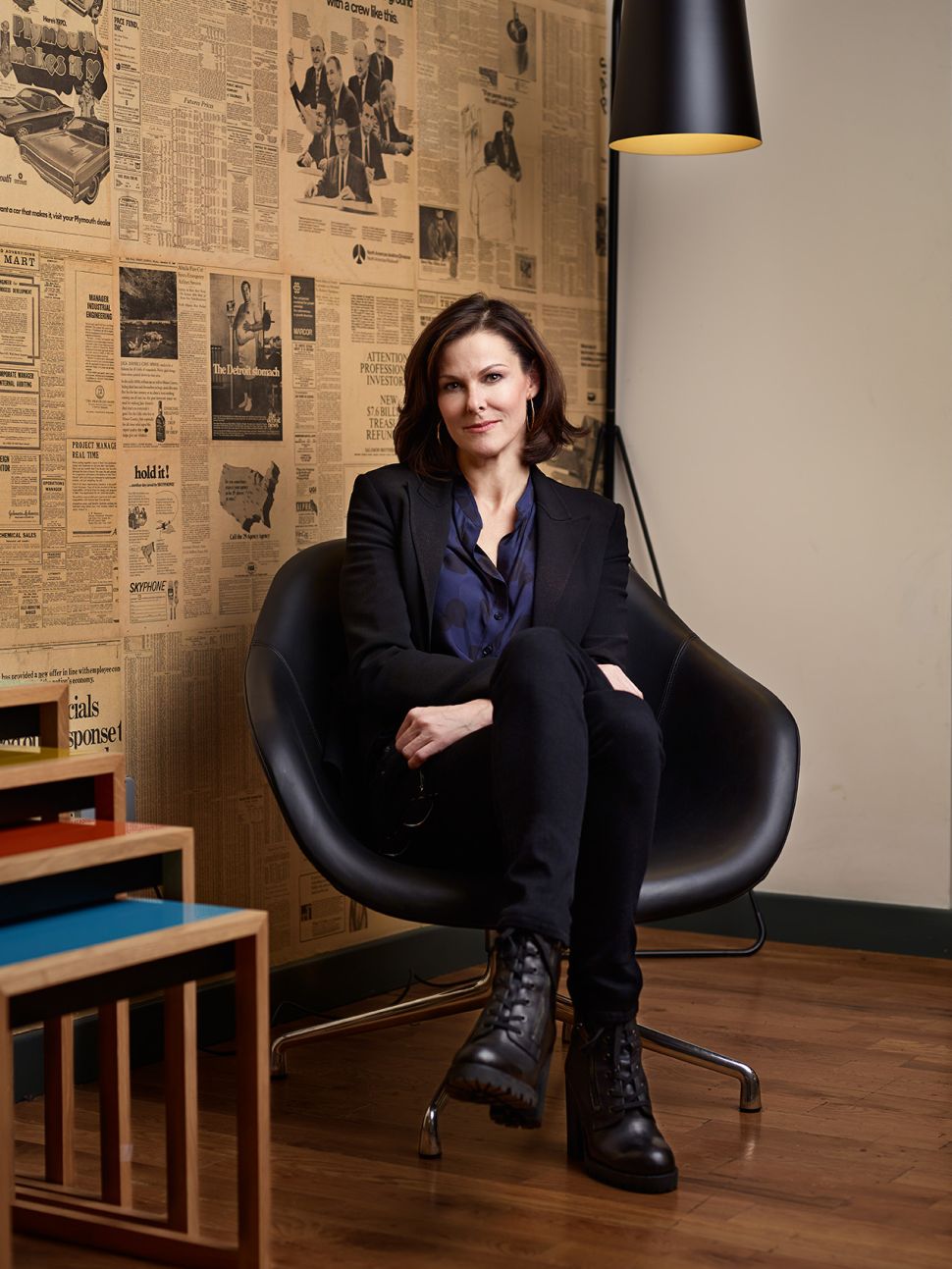