November has been, by virtually any measure, a bad month for Democrats. Most glaringly, they were resoundingly defeated in the midterm elections losing seats everywhere from the U.S. Senate to most statehouses around the country. The Republican victory was a rebuke not just for the Democratic Party, but for lame duck President Barack Obama as well. But the bad news for the Democrats, did not end with the election. Recent weeks have made visible the potential cracks in the consensus around likely 2016 presidential nominee Hillary Clinton, as the party’s activist base is increasingly less comfortable with nominating somebody as conservative as Ms. Clinton. This could lead to ideological divisions within the party that might create problems in future elections.

Despite all this, anybody who believes the Democrats in general, or Ms. Clinton specifically, have little chance of winning in 2016 is making a mistake. The Democratic Party has the good fortune to share a two party system with a Republican Party that, if recent history shows us anything, can be counted upon to try to do too much with their victory. That is exactly what some Republicans already seem to want to do.

Currently, the biggest vulnerability for the Republicans is the charge that they are only interested in opposition rather than governance. The one way the Republicans can contribute to this narrative is by shutting down the government, but for some reason, there are some in that party that want to do just that. Congressional Republicans have shut down the government for significant periods of time in the last twenty years, once in 1995-1996 and once in 2013. If they do it again this year or next, it will make it easy for Democrats to paint their opponents as petulant .

The issue that has Republicans talking about a potential government shutdown is the possibility that President Obama will unilaterally change immigration policy through an executive order. Substantively, this is not an unreasonable concern on the part of the Republicans, but they need to find a better way to respond to this than simply shutting down the government, an action that will appeal to the Republican base, but most likely not much beyond that. More importantly, a government shutdown by congressional Republicans hands the Democrats a very potent campaign issue for 2016–that the Republicans simply cannot govern.

Many in the Republican leadership understand this and are doing what they can to make their colleagues stop pushing for a shutdown. Last week, soon to be Senate Majority Leader Mitch McConnell made this point very clearly: “We will not be shutting down the government or threatening to default on the debt.” Jeff Sessions (R-AL), the chair of the Senate Budget Committee when the Republicans become the majority party in the Senate next year, expressed a similar position regarding a possible shutdown. “I think there is a growing momentum to the idea that Congress would be acting responsibly and modestly if it funds the government but simply bars the president from executing policies that Congress believes shouldn’t be executed by denying funding.” Other more conservative members of congress, however, such as Tim Huelskamp (R-KS) have used more confrontational language. “No one ran on getting along with the President,” he said. “The House pretty clearly isn’t going to fund amnesty.”

After every election, the temptation for the winners to read too much ideological meaning onto the results is strong. This is one of the reasons why elections in the U.S. are so maddeningly, for some, cyclical. The fact that a substantial number of Republicans are considering the possibility of a shutdown, regardless of whether or not they try to blame the President for that, is a reminder for the Democrats that while the bad news from a few weeks ago was that Republicans had a big win, the good news might just be that the Republicans now have two whole years to overplay their hand, shutdown the government or otherwise misunderstand the scope of their mandate from the voters. 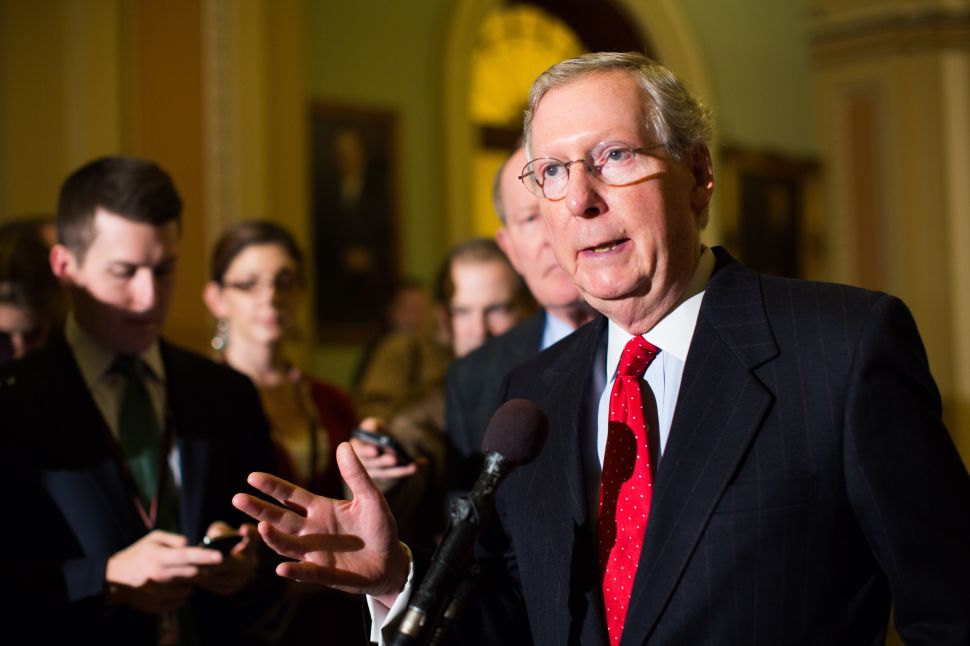