HACKENSACK – At the end of a campaign that surprised many political observers both locally and nationally, Roy Cho, the Democratic candidate in New Jersey’s Fifth Congressional District, was doing exactly what people now expect him to do. Cho was an army of one at the Anderson Street train station in Hackensack, trying to win over every last voter possible in his insurgent race’s final moments.

Cho shook every commuter’s hand that he could in Bergen County’s capital as they disembarked from the 6:04 p.m. train. He spoke to one unemployed man, fresh from a job interview, for 10 minutes about the man’s hopes for the future. He helped a woman with a walker into her car, talking to her for 15 minutes about her neighborhood’s needs. It took one voter about 30 seconds to tell Cho where his vote was going.

“I could never vote for [Scott] Garrett,” the man yelled over his shoulder after Cho pressed a campaign leaflet in his hand, referencing the Republican incumbent Congressman. “That guy is all out of touch for us here.”

These are words Cho hopes to hear in Bergen County, where potentially heavy turnout in places like dense, Democratic-leaning Hackensack and Teaneck provide Cho with the best chance of victory in an uphill battle against Garrett, a six-term incumbent.

At the end of his campaign in Hackensack, Cho voiced some words about why he ran for Congress in the first place.

“This is where I live, and we’ve gotten a tremendous response from people,” Cho, a Korean-born, 33-year-old attorney told PolitickerNJ after a full day of campaigning and an admitted two hours of sleep. “A lot of moderate Republicans have told us that they are with us, and we’ve localized the issues as much as possible. We’ve done everything we possibly could have done. This is not only about the future of northern New Jersey. This is about all of the people that I’ve met, one by one. This is about the future of America. This is about the American Dream.” 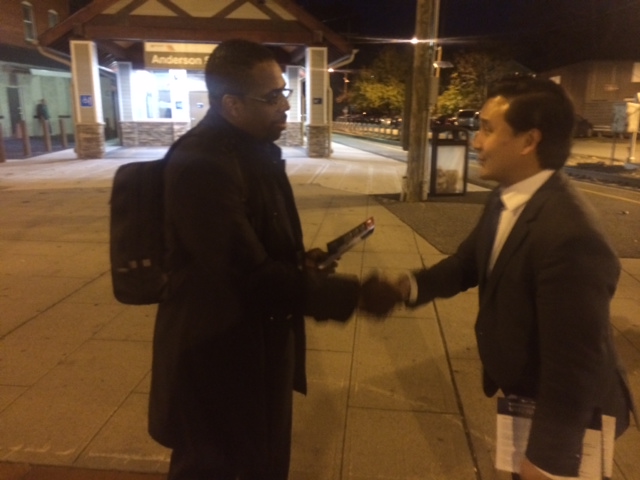