TOMS RIVER/WILLINGBORO – For the candidates of South Jersey’s third congressional district, these last few days leading up to Nov. 4th are all about one, four letter acronym: GOTV.

Get out the vote.

With three days to go before polls open on Tuesday, both Democrat Aimee Belgard and Republican Tom MacArthur spent a dreary Saturday retail politicking back and forth across Burlington and Ocean County, a battleground the two have tussled over throughout their grueling general election contest.

The candidates’ respective schedules included meet-and-greets with residents and door-to-door campaigning — all part of an effort to commit as many votes as possible before election day.

In Berkeley Township, in the kitchen of Steve and Nancy Pellechia, MacArthur made his 42nd stop on a 53-town GOTV tour of the right-leaning district. He was joined by Lt. Governor Kim Guadagno.

“This is stop number 42,” MacArthur said. “But I go into these towns and I hear the same thing everywhere, I don’t care if it’s a big town like Berkeley or a hamlet like the one I was in early this morning that had 600 people in it. People want opportunity, they want freedom, they want security, and unfortunately, people feel like the federal government is going in the wrong direction in all three categories. And that’s what to me this race is all about.”

While recent polls put MacArthur, a former insurance executive and mayor of the North Jersey town of Randolph, ahead in the right-leaning district, political observers are looking ahead to next week with apprehension. The outcome of the contest is likely to be close, given the demographics: the district is blue on paper, with 122,781 registered Democrats compared to 114,729 Republicans, and boasts a large population of independent voters.

But Republicans think they see an opportunity in the Ocean County-half of the district, where Republicans dwarf Democrats 53,492 to 39,619. It was the main take away of today’s kitchen meet-and-greet with Guadagno, who came out to lend support to the Republican hopeful.

“If Republicans, if independents, if Democrats who know we’re going in the wrong direction get to the polls, then I’ll win this election,” MacArthur said. “If they stay home, then you never know what will happen.”

“Look at this room,” Guadagno added. “What is there, 30 people in this room right now? Each one of these 30 people I suspect know five to 10 other people and what they’re going to do right now is say Tom MacArthur was in my kitchen, and he shared a cup of tea with me, and he heard me and he’s going to take it back to Washington so the people in Washington will hear me. And that’s the value of a tour like this — it may be grueling, but the 30 people in this kitchen are going to go out and talk to 10 more people and those 10 people are going to talk to other people because they’re going to come back and say, ‘Tom MacArthur understands the world that we’re in. He’s been there, he’s done that, he’s a job creator, he’s a family man, he’s a conservative.”

Belgard was on the move as well. Beginning at the Crystal Diner in Toms River, the Democrat’s tour included scheduled stops at the Hurricane Sandy-battered communities of Brick and Lavallette, though the latter event was cancelled at the last minute. The day culminated in a lively rally in Willingboro, where she appeared alongside Burlington County Freeholders candidates Tom Pullion and Mike Schmidt in front of a roomful of dedicated supporters taking refuge from the rain.

Schmidt and Pullion are in their own contentious battle with Republican incumbent Bruce Garganio and hopeful Mary Anne O’Brien in Burlington.

“I need your help so we don’t send a carpetbagger from North Jersey, moving down here to South Jersey, trying to buy himself a seat in Congress just so he can put another notch in his belt,” she told a raucous crowd at the Knights of Columbus headquarters. “We need a voice for the people of the third district for this country. I will be that voice. But I can only do it with your help. This weekend we have a plan to knock on over 100,000 doors between Saturday and Tuesday, and this is because of you. Folks who were out knocking on the doors for us in the rain today. Folks who have been in our office making phone calls. This guy might outspend me — he will out spend me. But he is never going to outwork me or the hardworking people that are working with me.”

Notably, Lonegan won the district against Booker in that contest, but Democrats this time around remain optimistic — and unified.

“This is our chance to get a real foothold in a county government that for too long has not been about everybody. A lot is on the line,” Booker said. “And I just have to say this. And please spread this word, I’m saying it from my heart. Tell people not to go into that poll — if you vote for me and not them I don’t want your vote. Because I know right now, we are one ticket, we are united, we are interdependent. I cannot go to Washington if I’m not standing on a strong foundation at home.”

Both Belgard and MacArthur have full days of campaigning ahead of them as they make their final push toward Tuesday. MacArthur is scheduled to make three more campaign stops with state Senator Diane Allen (R-7) in Burlington tomorrow, and will headline an Ocean County GOP rally on Monday with Republican freeholder Joe Vicari. 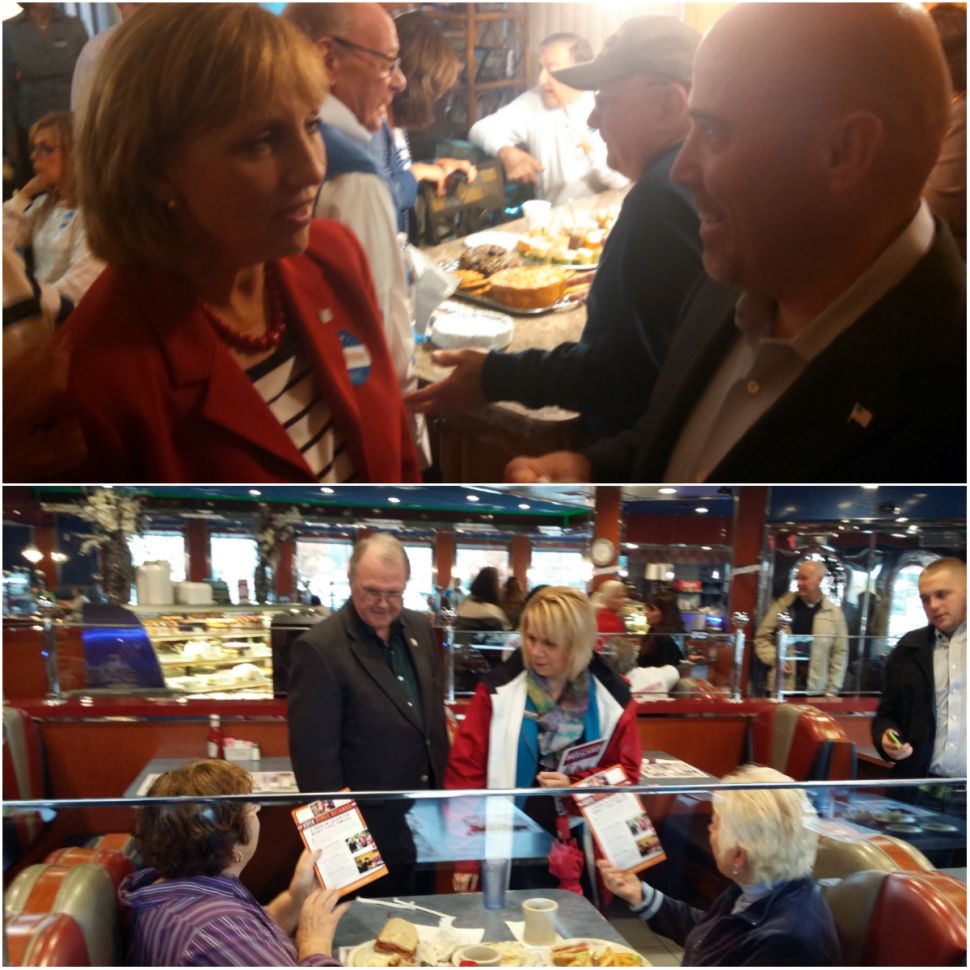