An Edouard Manet masterpiece moves from Washington to Los Angeles as Christie’s adds a spring to its step: Last night, the auctioneer held a $165.6 million Impressionist and modern art auction. Manet’s beaming Le Printemps, of the actress Jeanne Demarsy wearing a bonnet and holding a parasol, generated an eight-minute bidding war and $65.1 million, double the previous record for the artist. On loan for two decades to the National Gallery of Art, it was bought by the J. Paul Getty Museum in Los Angeles.

The auction last night was in line with the high pre-sale estimate. Just four of the 39 lots last night failed, a 90 percent sell-through rate about which Christie’s executives later crowed, along with the “reasonable” estimates and reserves. At Sotheby’s Tuesday night, just 79 percent of lots found buyers. But Sotheby’s $422 million tally, led by Alberto Giacometti’s bronze Chariot, was its best ever for the category and two and half times the size of Christie’s.

“Quite solid’’ is how Frances Beatty, president of the Richard L. Feigen & Co. gallery, characterized the Christie’s sale. “But it didn’t have as many knock-it-out-of-the-park things as Sotheby’s,” she added.

Christie’s top flop was Fernand Leger’s Les constructeurs avec arbre, the cover lot of its miniature catalogue for the sale. The Leger had a $16 million low estimate and was guaranteed by Christie’s. Painted in 1949-50, and years ago in the collection of casino magnate Steve Wynn, it depicts four beefy construction workers perched on girders of a building in progress. While it makes for a timely tribute to the hulking skyscrapers rising south of Central Park, there were no bids, despite auctioneer Andreas Rumbler giving the assembled dealers and collectors ample opportunity. “Oh, I’ll wait, absolutely,” he said, to no avail.

Le Printemps spent October on the road, as Christie’s promoted it in Hong Kong, London and Paris. A half-dozen competed for it. The winner was dealership Otto Naumann, bidding for the Getty, the New York Times reported. For the last $11 million he went one-on-one against Acquavella Galleries, which was on the phone with Department Head Brooke Lampley. “The Manet is a gorgeous, glamorous picture,” Beatty said. “I don’t think it’s a crazy price. It’s a price commensurate with the quality of the picture.” Today, Christie’s sells Impressionist and modern works on paper. Contemporary art goes on the block next week. 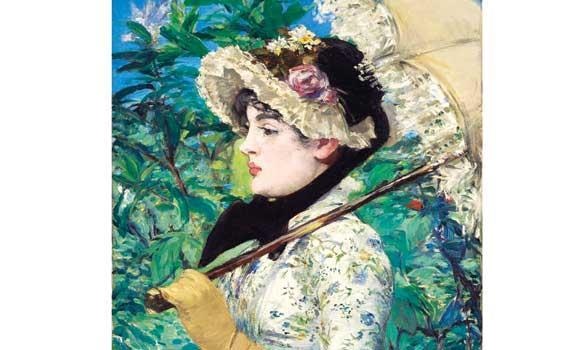