Less clear were the financial specifics of Alta’s new contract with the DOT—besides the $30 million investment promised by Alta and the cost of annual memberships rising from $95 to $145 per year. But today, a few details of the contract were revealed in a hearing of the City Council’s Transportation Committee, among them the fact that Citi Bike will pay the city $5 million a year for parking revenue lost from the placement of the docking stations. The city likely won’t be seeing any other revenue for some time, however, according to DOT Commissioner Polly Trottenberg.

“Going forward, we’ve simplified the profit sharing agreement. We’re now going to do a smaller piece of gross profits,” if, she added, they should come.

“Alta is confident that they will turn a profit, but it is too soon,” she said in response to pressing from councilman Ydanis Rodriguez, who chairs the committee. (Bike Share general manager Matt Berlin also skirted Mr. Rodriguez’s request for specifics, telling the councilman that “the owners expect it to be profitable” but that it was “really too soon to say when.” Bike Share CEO and Former MTA head Jay Walder did not attend the hearing.)

As for the $1 million in lost parking revenue that Alta has been reported to owe the city, Ms. Trottenberg said that “a number was never established, given that Alta was losing so much money, it seemed beside the point.” The DOT said that in 2013 Alta had $14 million in revenue, but was still “losing a significant amount of money.”

And while the current administration has made it clear that they do not currently wish to entertain the possibility of public subsidy for the program, a number of councilmembers—among them Jimmy Van Bramer, Costa Constantinides and Ydanis Rodriguez—professed their willingness to kick in public funding, should that prove necessary to bring the program to broader swaths of the city in a timely manner.

“Folks in Windsor Terrace and Kensington don’t want to wait five years to get involved,” councilman Brad Lander said. “If it takes public resources to achieve the expansion we want to all neighborhoods regardless of income, it’s public transportation infrastructure and we should do it. What do we need so that it doesn’t take 20 years to build out the bike share network?”

Several other councilmembers also expressed displeasure for the lack of a timeframe for the phase 3 rollout to places like Staten Island, the Bronx and Eastern Queens. (The fact that phase 3 areas were accompanied by the words “potential expansion” on the maps Citi Bike debuted last month did not broadcast much confidence in its happening at all.)

At the hearing, the DOT also discussed other improvements to the bike infrastructure. Ms. Trottenberg said that it has committed to building 50 new bike lanes per year, 42 of which have already been installed for 2014, and exploring bus bike racks through the use of a pilot program.

The DOT also debuted a bridge campaign to expand bike lanes on bridge networks, possibly including the Verrazano, though she did not express much optimism that a Verrazano bike lane would become a reality anytime soon.

“We’ve been looking into it, but it has a big price tag on it right now,” Ms. Trottenberg said. “We’re just taking a preliminary look at all the challenges, but at the very least, we’re looking for ways to take bicycles over the bridge on buses.” 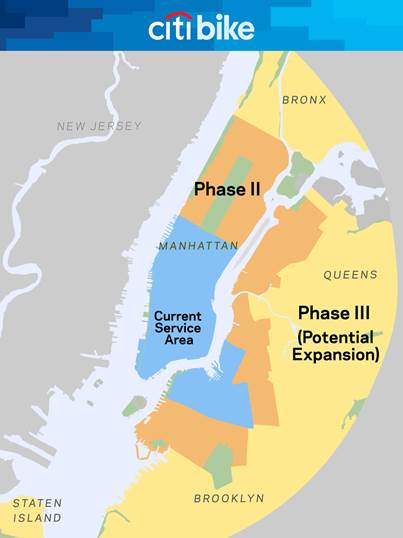