Press should have been allowed inside a meeting between the Communications Workers of America and Mayor Bill de Blasio held in a public school this summer, city investigators said today.

Department of Investigation Commissioner Mark Peters and Department of Education Special Commissioner for Investigation Richard Condon released a report saying the mayor’s office and Local 1182 of CWA “improperly excluded members of the press” from the July meeting at at P.S. 66 in Brooklyn — citing DOE regulations requiring events in public schools to be open to the public.

“Public access to events on public property is the foundation of a democratic society. City officials and agencies must educate themselves on the rules and be careful to follow them,” Mr. Peters said in a statement.

The investigators found that the meeting, from which New York Post reporters were barred, should have been open to all under both state law and the Chancellor’s Regulations that govern the use of school buildings–but determined that the improper actions on behalf of the mayor’s office and DOE were “inadvertent.”

The mayor issued a mea culpa this afternoon at an unrelated press event.

“It was a mistake. I think by definition we were in a public building where the media should have been allowed,” Mr. de Blasio told reporters at an unrelated Bronx press conference. “I think that was a mistake by my team and a mistake we won’t make again.”

The mayor attended the meeting to show support for the union workers amid tensions with their employers at Cablevision, according to the report.

According to the report, while the mayor’s office was in contact with the union about the meeting — and about the stipulation that there be no press — they were never in touch with the Department of Education or its lawyers before the event.

The CWA was in touch with DOE, but there seemed to be miscommunication there, too. The department’s general counsel, Courtenaye Jackson-Chase, asked whether the meeting was open to the general public and whether press was expected, according to the report. The union’s District One Organizing Director Timothy Dubnau told a different DOE office: “No press. It’s open to the public.” That was then relayed to the general counsel as, “They are not expecting press coverage”—a different implication than saying the press would be barred—and the event was approved.

The report found that barring the media was actually a decision made by the mayor’s office, not the union — and that CWA never mention to DOE the mayor’s office had determined the event should be closed press.

“If the Mayor’s Office had communicated directly with Jackson-Chase or her staff, this entire problem could have been avoided,” the report found.

E-mails show that Garbiel Schnake-Mahl, assistant to top de Blaiso aide Emma Wolfe, e-mailed another administration member on July 3 noting that the communications team was “leaning towards closed press” for the event. On July 7, a follow-up email from Schnake-Mahl said, “they think closed press is fine.” Later that night Schnake-Mahl signed off on a flyer for the event and again noted via e-mail “Closed press. No videographer.”

The flyer was also problematic, the investigators found, and should have included a disclaimer that the Department of Education did not sponsor or endorse the event.

There’s also a question of whether it was appropriate to hold the event at a public school in the first place, as political events are barred from school property. The report found that the mayor’s prepared remarks were not overtly political — but noted they had no way of knowing what was actually said during the event, since the mayor’s office did not provide any transcripts or recordings of the event. 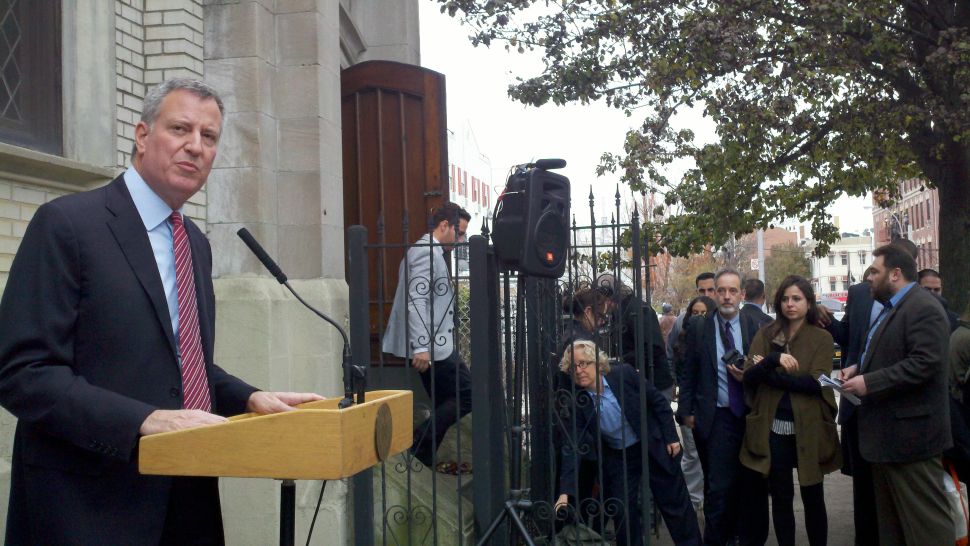