The difference between hell and purgatory is where the suffering leads. The circles of the former go nowhere but round and round, forever. Hell is a carousel. In the latter, however, the deprivations on the slopes of Mount Purgatory presumably lead to salvation. In purgatory, there’s a point.

In the divine topography of Manhattan, Times Square is Cocytus, the icy, lowermost floor of the underworld. In the frozen rivers of sidewalk, self-regarding selfie souls are riveted in place, like Cain and Judas. One arm extended to eternally hold a phone with front-facing camera, their faces are fixed forever in a painful rictus. Long after the battery dies and their muscle fibers short out, the shades are kept in their unnatural poses by demon Elmos.

Through their tank in the Red Lobster on 42nd Street, this scene, a confusion of flesh and bright lights, must be of some small comfort to the lobsters piled on top of each other. Doomed, they think, “Fuckers!” One of the more advanced lobsters might even imagine writing a tract bemoaning the febrile creatures beyond his wall called “Consider the People.” Alas, he can’t, for his claws are banded shut.

The lobster tank is on the landing of a stairway that leads to the second floor dining room, but most people take the elevator. They are instructed to do so by a man with a gray vest and an earpiece who stands at a granite-topped podium. “Welcome to Red Lobster,” he says, a cheerful Charon.

With due respect to the lobsters and without discounting their suffering, the chain, by far the largest full-service seafood restaurant in the world, recently debuted a new menu. And it has made the experience there purgatorial, instead of infernal. There’s still painful rending of the flesh and rendering of fish—but it’s better.

Last year, the chain emancipated itself from Darden Restaurants, its parent company, and went rogue. A new corporate chef, Dustin Hilinski, replaced the old guy who was a product of Disney’s Epcot Center. Mr. Hilinski was head of research and development for Heinz—the man in charge of finding the 58th, 59th and 60th varieties, I suppose.

Last week, Mr. Hilinski introduced his new menu, which has stripped from the pages far-out turf dishes like spicy buffalo chicken bites and a wood-fired pork chop. Now there’s 50 percent more shrimp in the Ultimate Feast, a Lucullan paean to fried shit; there’s lobster on nearly every page; and, this is something we are all excited about, a new binder-style menu system.

On a recent Thursday afternoon, the second floor dining room of the Times Square Red Lobster was hushed. Rare in restaurants, there was no deafening soundtrack to make the experience festive. In fact, the dark gray walls sparsely decorated with a few framed vaguely Down East photographs—lighthouses, promontories, etc.—and high wooden booths gave the room an austere Puritanism. Only the waiter, a handsome Brazilian in a well-fitting white dress shirt named Lon, seemed capable of levity.

Lon directed us toward the newer menu items, including a retooled “Wood-Grilled Lobster, Shrimp and Salmon” platter ($34.99) and nominally more-healthy “Crispy Shrimp Lettuce Wraps” ($12.99). Lon of Red Lobster is the natural heir to Alex from Target. His smile was angel farts and his eyes twinkled with unicorn pee. Such was Lon’s charisma; we took his guidance unquestioningly.

But first the biscuits. Among the inviolable items of the Red Lobster menu is the Red Lobster Cheddar Bay biscuit, a small mound of butter and flour and cheese with a cult following. An avid Red Lobster fan as a tween, I lived on Cheddar Bay biscuits for a few years there. Edifyingly, these were still available but spongier than my memory had made them. They tasted O.K. but felt like little cheesy Nerf pucks. The biscuits arrived with our appetizers, the aforementioned lettuce wraps and the “Lobster-Crab-and-Seafood-Stuffed Mushrooms” ($11.99). In general, Red Lobster appetizers are a boon for compound-phrasal adjective fans and en-dash fetishists but a boondoggle for everyone else. Those little mushrooms, for instance, submerged in a pool of Monterey cheese, prove unambiguously it is time to retire mushrooms as a method of conveyance. Fleshy-bottomed, watery-tasting warts, these mushrooms were abysmal. Worse, with a mushy payload of fishy ephemera, a better vessel would nevertheless have been scuttled. Cheese with a slight crabby aftertaste, and a mouthfeel of ugh.

As for the newly inducted apps, those lettuce wraps were even worse. If the mushrooms warranted a mushroom moratorium, the Crispy Shrimp Lettuce Wraps let us reap the crap trap claptrap of soy-ginger marinade, a sauce that should be banned forever. These shrimps, drowned in the stuff after frying, were too-gooey food, sickly-sweet fooey-food, dude. A charitable eye could discern a hidden gesture of sliced jalapeno and crispy lettuce to cut the sweetness, but it was not enough to save anything. The shrimp belonged with all that other cheap candy-ass bullshit, in those 25-cent Superball machines at the C-Town checkout.

Leeriness should always greet a dish that contains very different things treated the same way. Does browned butter and wood-firing, for instance, befit salmon, lobster and shrimp? Surprisingly, it does. And, because the browned butter drizzle is a deluge, it makes the potatoes and green beans better, too. This drizzle is off the shizzle, my nizzle. Wood-fire grilling, however, is much kinder to salmon flesh than it is to the lobster meat, which becomes tough and stringy. Lobster is a protein that needs subtlety while Red Lobster is a chain that eschews it.

But the question isn’t, “Is this bad?” It is, “Is this better?” And the answer is, yes, it is. In its more baroque manifestations, Red Lobster’s menu used to do a lot of things poorly. Now, with a narrower focus, it does fewer things poorly. This, one might argue, is a matter of gradation. True, it is. But since Red Lobster is such a massive operation, even incremental change has exponential consequences.

The stars here aren’t for what is, but for what isn’t. They are awarded not for the sickly sweet shrimp but for the absence of the even worse buffalo wing bite, not for the wood-fire grilled lobster but that there isn’t a wood-fire grilled pork chop. Slave to volume and prostitute of product supply, the chain is no less bound than the doomed lobsters in their tanks. Nevertheless, it crawls upwards toward salvation, slipping on brown butter slopes but never giving up. 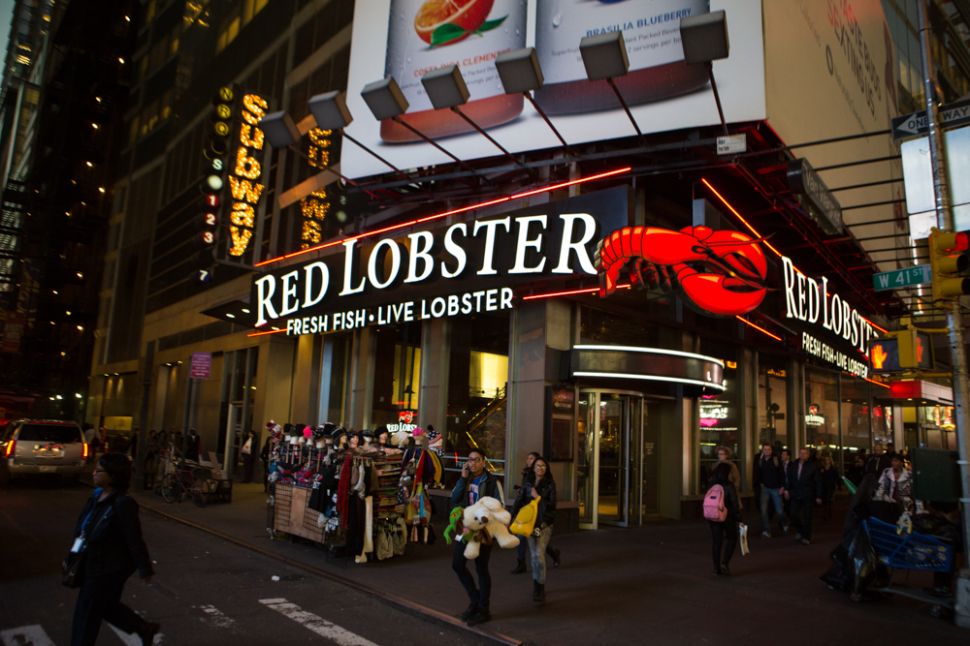