The City Council’s Committee on Consumer Affairs today weighed ways to rein in the marauding bands of superheroes, cartoon characters and life-sized Muppets shaking tourists down for tips in Times Square and other heavily trafficked Manhattan destinations.

The committee met to discuss a bill by Bronx Councilman Andy King that would create a system of licensing and regulations for costumed characters similar to the one that governs street vendors. But the proposal ran into criticism from both sides–with some arguing that it would grant official imprimatur to masked panhandlers, and others claiming it would unfairly interfere with the livelihood of low-income New Yorkers.

Mr. King’s proposal would require dressed-up characters to obtain a $175 two-year license to request money on public streets, pay an additional $75 to register in a police fingerprint database and to maintain a certain distance from commercial doorways and narrow sidewalks. Mr. King, his colleagues and NYPD Deputy Inspector Edward Winski shared horror stories of over-sized Sesame Street and comic book characters grabbing, stalking and encircling tourists to harass them into giving money for posed photographs.

“We should have an opportunity to know who these individuals are underneath these costumes,” Mr. King said, arguing that his bill was intended to accommodate both performers and pedestrians alike. “We don’t want anybody to feel uncomfortable when they’re down there.”

“My concern is I think it puts a stamp of approval of being a costumed character in Times Square,” he said. “I don’t think we need to say ‘the City of New York welcomes you to put on a costume, come to Times Square and do this.'”

Mr. Johnson instead suggested creating limited zones where the panhandlers could do their business under close scrutiny from the NYPD.

“Then the NYPD would know exactly where those costumed individuals were, and if they left those lines I assume they would be violating the law,” Mr. Johnson said, noting that there are on average 75 such actors in Times Square at midday. “If we did in fact limit the number of locations where this activity was permissible, then if extra people showed up, they would be out of luck.”

Mr. Garodnick was similarly skeptical of the proposal, though he acknowledged the difficulties implicit in attempting to levy regulations on wearing a costume. He compared the colorful hustlers to the squeegee men of yesteryear.

“Some of the behavior out there is simply abhorrent and needs to stop. But the problem is with the behavior, not with the costumes,” Mr. Garodnick said, calling for greater enforcement to weed out bad actors. “This bill, in an effort to walk a careful line of constitutionality, does not do that.”‘

Brooklyn Councilman Robert Cornegy–who does not sit on the consumer affairs committee, but chairs the small business committee–spoke against the bill for entirely different reasons. He argued that the bill was designed to prevent recent immigrants and poor people from profiting from tourism, and would encourage police harassment of performers.

“I strongly believe that the current effort to regulate the activity of costumed characters is misguided and is another example of broken windows policing that I have spoken out against,” he said. “The real goal of the bill is to reduce the number of characters engaged in this activity, by creating a barrier in the form of a costly fee.”

Organizations supporting the costumed characters–who sent Batman and his arch-nemesis the Joker to protest the legislation–echoed Mr. Cornegy’s assertions.

“This just sounds like another stop-and-frisk database,” David Franco, spokesman for New York City Artists United for a Smile, said in a statement. “After supposedly leaving the stop-and-frisk era of policing, it seems as if the City Council and other elected officials are finding new means to conduct the same old illegal profiling business.”

There was no vote on the bill, and Council sources suggested it could be weeks before the initiative moves forward. 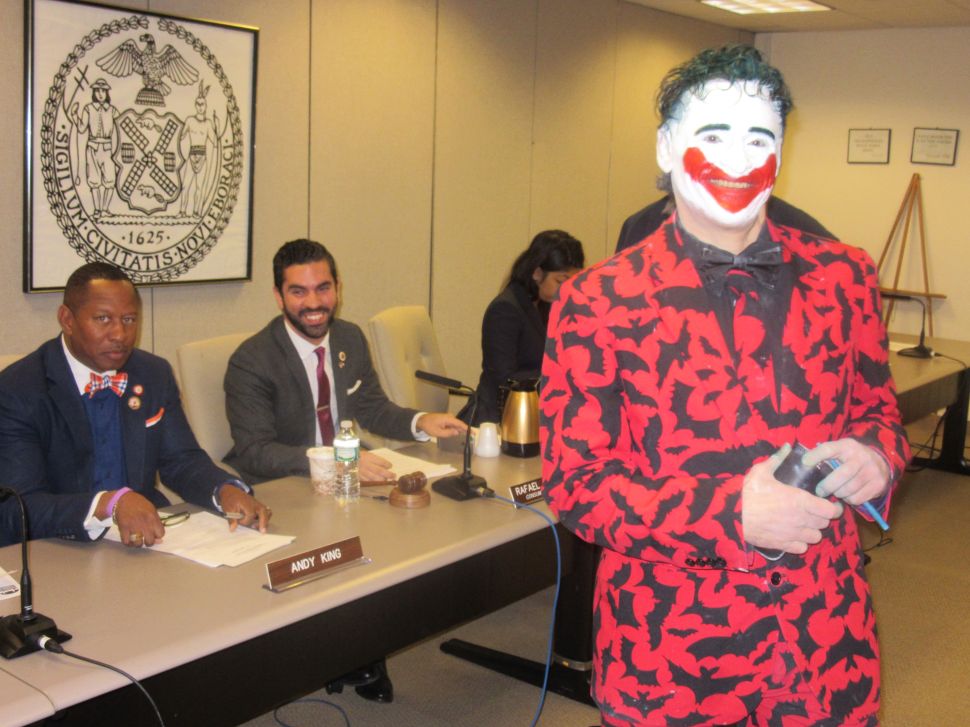