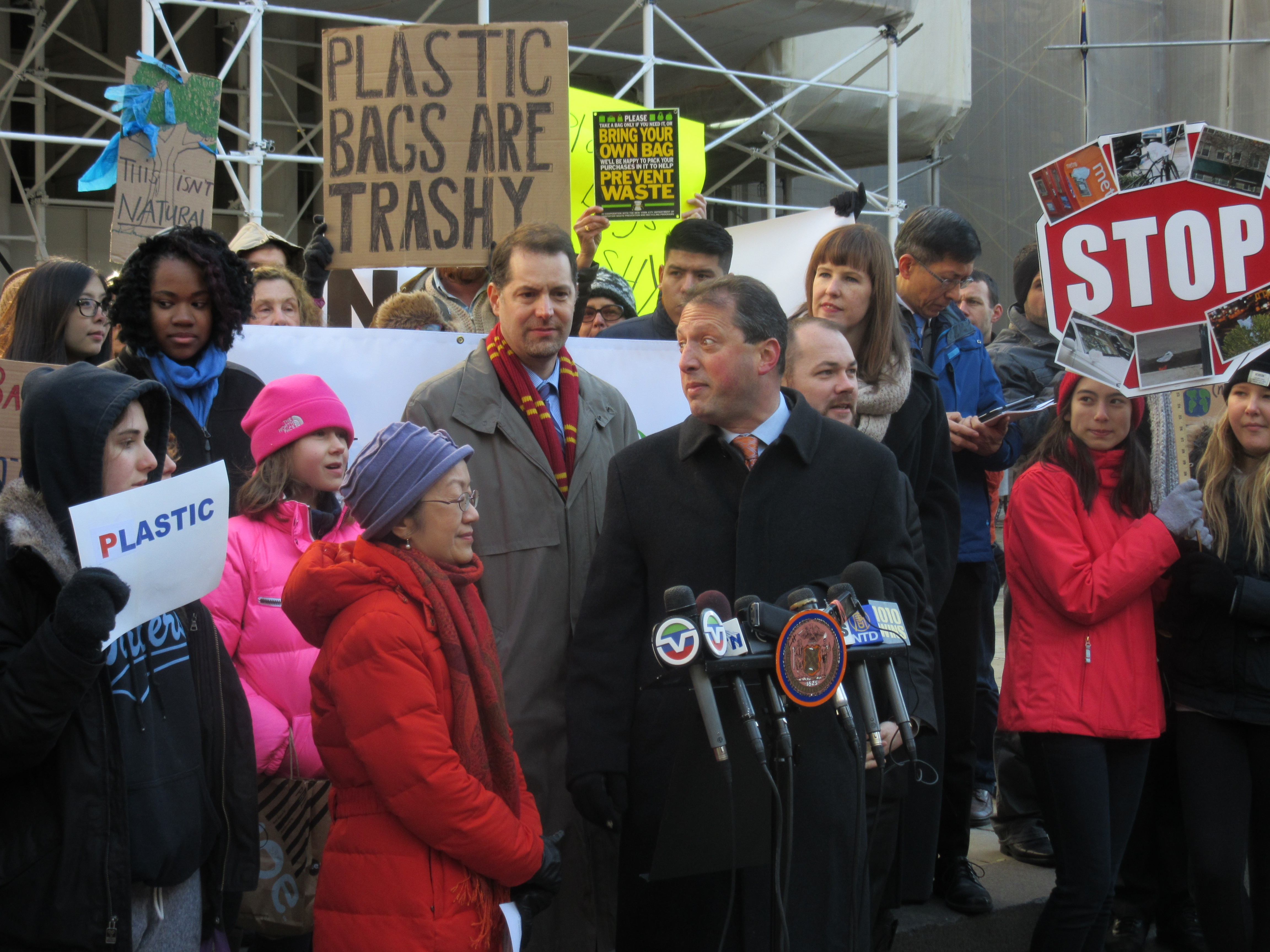 A quartet of council members joined dozens of environmental activists to promote a proposed 10-cent surcharge on plastic bags on the steps of City Hall today–a measure they alleged would result in a 60- to 90-percent reduction in the plastic pouches filling parks and waterways and choking public landfills.

Manhattan Councilwoman Margaret Chin and Brooklyn Councilman Brad Lander devised and co-sponsored the bill, which will require customers to pay store owners an extra dime for every plastic bag they take while shopping. Standing beside Manhattan Councilmen Mark Levine and Corey Johnson shortly before the first of several hearings on the legislation, they argued that plastic bags are suffocating the city–and that their bill would be a breath of fresh air.

“We see them on our streets and our sidewalks and our storm drains. We see them in our trees, some of them make their way out into our oceans, where they join other plastic that’s clogging our oceans with plastic waste. And the good news is that there is something very simple that New Yorkers can do to drastically reduce plastic bag waste in New York City, and that’s what we’re here to do today,” said Mr. Lander, citing statistics showing New Yorkers use 5.2 billion plastic bags a year.

Ms. Chin argued the new fee–which would go not to the city but into store owners’ pockets–would be a gentle incentive for New Yorkers to switch to reusable tote bags for their groceries. The councilwoman noted that the disposal of the 600 bags the average resident uses each year costs the city roughly $10 million.

“We’re just asking people to change their habit and try to save the environment,” Ms. Chin. “$10 million we could use for a lot of different things.”

Mr. Lander and Ms. Chin noted that similar measures have succeeded in reducing plastic bag use in 140 other cities across the country and in municipalities worldwide. Mr. Johnson, recalling the sight of innumerable bags floating in the Hudson River on the west side of his district, argued that the measure would be a thoughtful, middle-of-the-road way to combat the plastic plague.

“I would be open to going farther, to banning plastic bags,” Mr. Johnson said. “But this is an approach that works, that is a common sense measure to take care of our city going forward. Council member Lander and Council member Chin aren’t being radicals here.”

Mr. Levine argued that New Yorkers have become accustomed to taking plastic bags for even minor purchases, then throwing them out. The pol also took time to repudiate arguments that the measure is an underhanded tax.

“There’s no reason for customers to stop and think about asking or receiving a bag. And this fee–not a tax, this fee–forces customers to ask the question, ‘do I need that bag?’ And so often the answer is ‘no,'” he said. “This is a win for the small business community. It’ll be a little bit of extra income, not a tax going for the city, and we’ll save money on plastic bags. It’s a win all around.”

Mr. Lander also brushed off claims from the Progressive Bag Alliance–an organization of bag manufacturers and distributors that has found an ally in Brooklyn Councilman Rafael Espinal–that the measure would destroy jobs in the industry, and negatively impact low-income communities. The councilman noted that the ordinance includes exemptions for food stamp recipients.

“It’s not surprising that the people who make and sell plastic bags are opposed to a measure that would reduce plastic bag waste,” Mr. Lander said. “New Yorkers across the city, in every neighborhood, from the Rockaways to the Bronx, in Harlem, in Brooklyn, it will become easier for them to remember to bring their reusable bags from home.”

Mr. Lander also addressed the Bag Alliance’s argument that the solution is to create more extensive recycling programs, countering that there is no efficient way to gather and process huge numbers of plastic bags–or any incentive for New Yorkers to participate in the program.

In her testimony before the Council, Mayor Bill de Blasio’s Sanitation Commissioner Kathryn Garcia seemed to concur with Mr. Lander and his allies.

“I don’t have a way to recycle plastic bags,” she testified before the committee, urging New Yorkers to switch to reusable bags and arguing that surcharges have been proven effective. “In other cities, fees for plastic bags have led to dramatic reduction in usage.”

The Progressive Bag Alliance, however, maintained that the plan will simply add to the financial burdens residents of the city face and called for more education.

“New Yorkers already pay among the highest taxes in our country, and a new tax will hurt New York’s most vulnerable citizens–low-income workers and seniors–while failing to achieve any environmental goals,” the group declared. 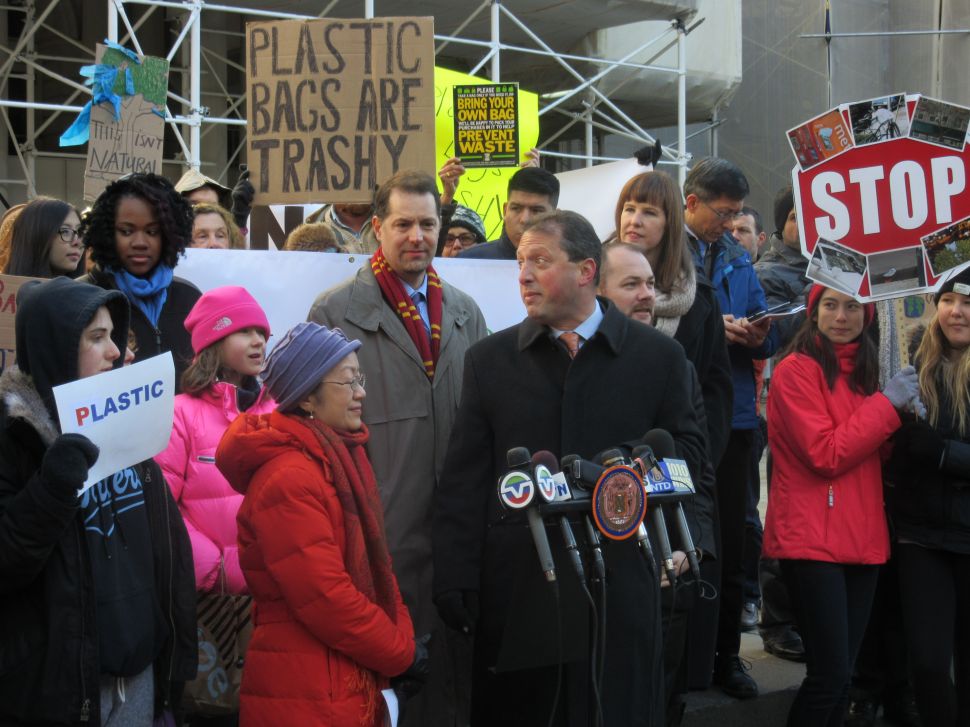