The massive Astoria Cove project is a major stride closer to launching today — as is long-proposed ferry boat service for the Queens waterfront area.

After months of negotiating and hours of backroom deliberation, the City Council’s powerful Land Use Committee today stamped its approval on the controversial 1,700-unit luxury development–permitted that it set aside 468 units for low- and middle-income tenants, hire unionized construction workers and building staff, include a co-operative supermarket, pay for improvements to local parks and a senior center and commit $5 million to the construction of a ferry dock.

“I am happy to say we have an agreement here at Astoria Cove that truly integrates this development into our community,” said Councilman Costa Constantinides, who represents the area where the development will take place, but does not sit on the Land Use Committee. “This deal is historic and we’ve changed the way development happens.”

The controversial luxury Queens waterfront project–which also includes retail and a new school–encountered considerable resistance over developer Alma Realty’s initial reluctance to hire union labor and to set aside more than a quarter of the new residences for low- and middle-income tenants. Mr. Constantinides–joined by Council Speaker Melissa Mark-Viverito and Queens Borough President Melinda Katz–had led the opposition and the arm-twisting, and the Council almost always defers on land use matters to the wishes of the local representative.

Mayor Bill de Blasio, however, was a supporter of the project–seeing it as a test case for his new mandatory inclusionary zoning policy, which requires developers to insert affordable units into new developments as a precondition for construction. Previously, the city had relied on subsidies and tax abatements to entice companies into adding below-market rate units.

Committee Chairman David Greenfield noted that the 27 percent of units set aside for below-market rents is the largest affordable housing percentage agreement in city history.

“That means that this is really incredibly significant. The developer cannot build unless they build affordable, which is something we’ve never done before,” said Mr. Greenfield, who argued the community benefits and labor arrangements are unprecedented in his tenure as a councilman.”We have not had a better deal than this one. This is the best deal we have made to date in my five years in the City Council.”

Further complicating the already fraught Universal Land Use Review Process was the revelation that the mayor’s Department of Housing Preservation and Development had accidentally misread the zoning maps for the area, underestimating the amount of affordable housing Astoria Cove would require for a coveted 421-a tax break.

Councilmen Donovan Richards and Jumaane Williams expressed reservations about the lack of provisions for very low-income individuals, but voted in favor of the project anyway. Councilwoman Inez Barron abstained, noting that the affordable housing is reserved for those making 60 to 125 percent percent of the area median Income, an average of incomes in the surrounding area.

“We have to say ‘affordable to whom?'” argued Ms. Barron, who also noted a lack of accommodations for the homeless and special needs populations. “We’re not looking at approximately 70 percent of the people who don’t meet those levels.”

There will be a full council vote at tomorrow’s stated meeting, but the approval from the committee and Mr. Constantinides represented the project’s last major hurdle.

Even with a ferry dock, however, the area will still need ferry boats for transport to other boroughs–which Mayor Bill de Blasio has said is one of the objectives of his administration. 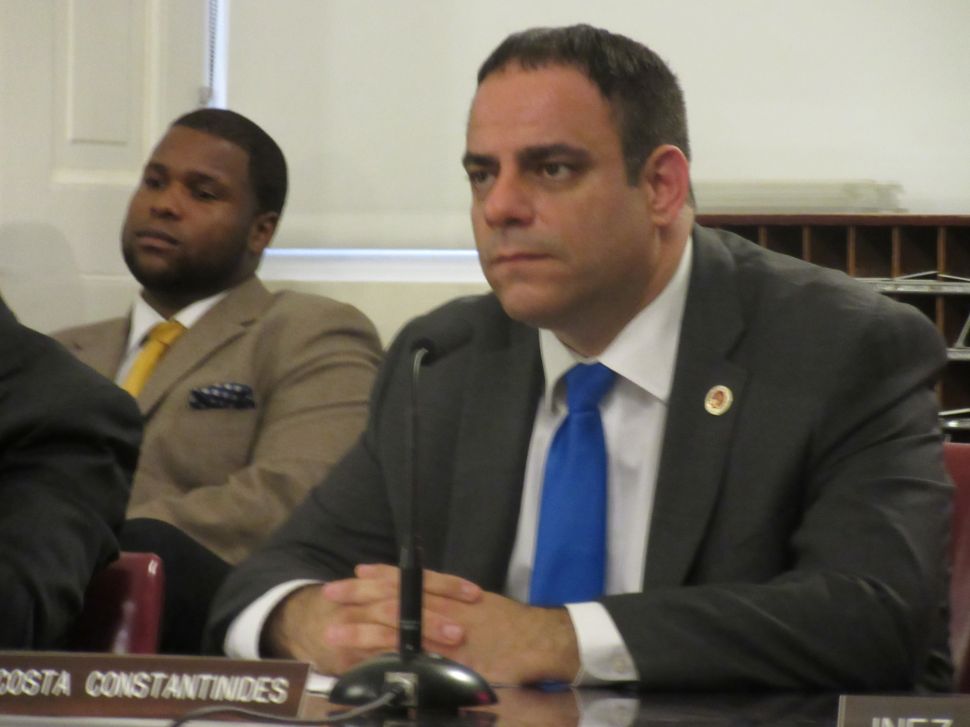