“Today our office is announcing a $35 million commitment to help to eliminate the backlog of untested rape kits nationwide. The examination of those kits will provide DNA samples that I believe will solve previously unsolved sexual assaults throughout the country, and will bring some measure of closure to victims and survivors who have waited years for their cases to be resolved,” Mr. Vance said today at a press conference in his Manhattan office.

Sexual assault evidence kits, better known as rape kits, are compiled in the aftermath of a reported sex crime. The rape victim — who is unable to shower because her body has become a crime scene, Mr. Vance said — is then subjected to an invasive gynecological exam. After all that, around the country some rape kits have simply sat on evidence room shelves, with prosecutors or police unable to spend the roughly $500 to $1,000 per kit to test them in cases where a suspect isn’t immediately apparent. In other cases, the kits were simply forgotten over the years, building up to an amount it becomes costly to test all at once.

The money will be doled out as grants to ensure it goes to programs ready to actually make use of it, Mr. Vance said. The funding will come from the city’s $440 million share of an $8.83 billion settlement with French bank BNP Paribas S.A., which admitted to violating U.S. sanctions by moving money through New York on behalf of Sudanese, Iranian and Cuban clients.

On television, Ms. Hargitay portrays Olivia Benson, a crusading and eternally sympathetic NYPD sergeant who investigates sex crimes and advocates strongly on behalf of victims. In real life, inspired by her fictional persona, she runs the Joyful Heart Foundation to help sex assault survivors — and in recent years the foundation  taken up the national backlog of rape kits as a major cause for advocacy.

She praised Mr. Vance as a “hero.”

“This is, hands down, the biggest investment that anyone has made to reduce the backlog of untested rape kits in the United States,” Ms. Hargitay said.

The issue of untested kits came into the spotlight after 11,000 untested rape kits were discovered in Detroit — where they lingered in a city that possessed almost no way to pay for testing them.

“We literally had to beg and borrow,” Kim Worthy, the prosecutor for Wayne County, which includes Detroit, said at the press conference.

But people stepped up to help — including Ms. Hargitay’s foundation.

“Each day as we struggled for funds, the rape kits got older and older and older, and victims were denied justice yet another day, another month, another year,” Ms. Worthy said. “And the rapists kept on raping and committing other crimes…these rapists did not stay in Detroit.”

So while the money will be used to pay for investigating crimes outside of this state — New York City has already eliminated its own backlog of 17,000 rape kits in an effort that began in 1999 — Mr. Vance and Ms. Worthy said the nationwide effort would solve and prevent crimes New York City here, too.

Out of 11,000 untested rape kits in Detroit, prosecutors found 1,600 DNA samples that were later involved in rapes elsewhere — including New York.

“We’re funding this project because rape is not a local crime,” Mr. Vance said. “Many who rape, rape again — and they rape again elsewhere. That’s what makes the backlog a national problem. DNA evidence solves crime across state lines and throughout the country.”

Natasha Alexenko’s case is an example of that. After she was violently raped and assaulted at gun point in New York City in 1993, her case went cold and her rape kit sat on a shelf for nine-and-a-half years.

“As the D.A. said, each rape kit represents a person whose body was a crime scene — and everything was inside that box of mine,” she said.

In 2003, the city opted to use the DNA evidence in her rape kit to charge her unknown assailant in a “John Doe indictment,” since the statute of limitations was approaching. In 2007, the NYPD found a DNA match to her attacker — after he was arrested for fighting with an officer who stopped him for jaywalking in Las Vegas. He was eventually convicted and sentenced to at least 44 years in prison. Now, Ms. Alexenko advocates for the testing of rape kits nationwide.

“I don’t even have enough words to thank these people behind me — and I think the public owes them a debt of gratitude,” she said.

Ms. Hargitay said she believed the nationwide backlog in testing kits offered a “brutal and clear demonstration of how crimes of sexual violence are regarded in our society.”

“The rape kit backlog sends two terrible messages. To victims, it says: ‘you don’t matter. What happened to you doesn’t matter.’ And to criminals it says: ‘what you did doesn’t matter,'” Ms. Hargitay said.

But testing the kits, she said, changes that.

“At long last, survivors hear the message: You do matter. What happened to you matters. Your cases matter.” 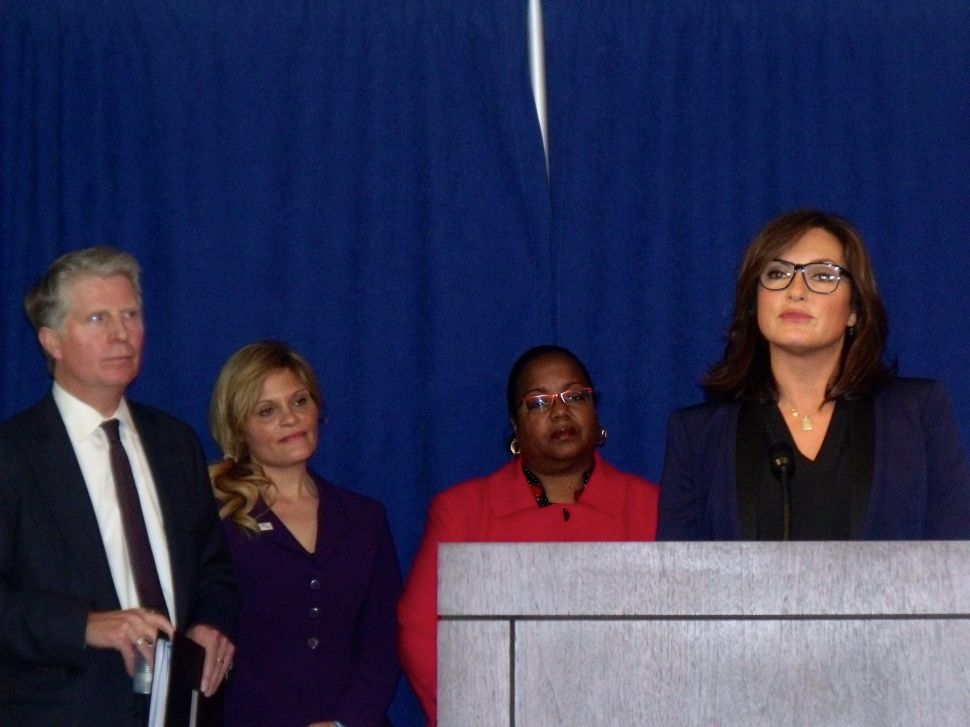